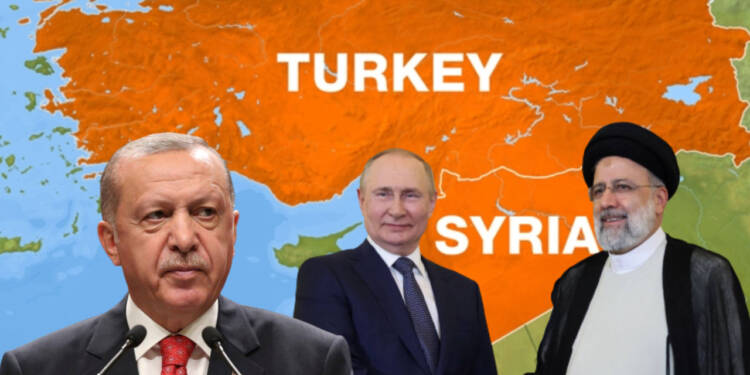 Turkish President Erdogan has been playing the double game and his actions have finally come to bite him back. Ankara has an ongoing dispute with the Syrian Democratic Forces (SDF) in northern Syria.

Now, SDF is a subsidiary of the Kurdish YPG which Turkey believes is a terrorist organization, closely associated with the Kurdistan Workers’ Party (PKK).

Erdogan said in March this year that Ankara would launch a cross-border operation into northern Syria to neutralize the SDF forces which are supposedly a threat to Turkey. A summit between Turkey, Russia and Iran recently materialized in Tehran.

Turkey reportedly aimed to get a green light from Moscow for a military operation in northern Syria. However, Putin has reportedly isolated Ankara, but wait there is much more to Erdogan’s misery.

On Tuesday, Putin arrived in Iran and held talks with Supreme Leader Ayatollah Ali Khamenei. On the surface, Putin’s visit to Tehran was nothing but a trip to secure a deal between The National Iranian Oil Company and Russian gas producer Gazprom.

The oil deal signed in Tehran was just a prelude to something big that the media never got into. Moscow has been handed a massive boost as Iran is “ready” to export military equipment to the Russian troops in Ukraine.

The CEO of Turkey’s Baykar, which makes the Bayraktar drones, ruled out supplying the Bayraktar TB2 to Moscow but has reportedly supplied it to Ukraine. Just a couple of days later, Iranian officials stated that they were supplying “several hundred drones” to Russia for use in the Ukraine war.

Summing up, Putin made a visit to Tehran and asked Turkey to be part of the meeting just to make a deal with Iran on lethal drones in front of Erdogan. Moscow is in complete opposition to Erdogan’s plans of war against the SDF in northern Syria.

Recently, the Russia-backed Assad Government in Syria has formed a coalition with their former rivals- SDF, in the region to counter Turkish aggression. Plainly said, Putin would possibly be fighting a proxy war with Erdogan in northern Syria.

But wait, the saga of Erdogan’s torment does not end here. Ankara was possibly counting on Iran’s support for its offensive against the SDF but recent developments have resulted in Turkey’s complete isolation from its former allies.

Just two days after the Tehran summit, Ankara dashed all niceties of diplomacy by going for an artillery attack, on Wednesday, that hit a village of Parakh in Zakho district in the Kurdistan autonomous region in Iraq. Nine civilians died in the Turkish offensive according to Iraqi officials.

The reason for the attack is believed to be Turkey’s animosity with Iraq over the northern Iraq region that is under Kurdish hands. To place things in context, the region is also a treasure trove with untapped reserves of oil. Ankara, in the garb of security concerns, has been trying its luck to outgun the Kurdish dominance in this region.

Now, political leaders in Iraq are ideologically affiliated with Iran. Iraq has been a reliable partner for Iran even amid widespread sanctions on Iran. Notably, both nations share a warm relationship. Therefore, Tehran would avoid backing Ankara in its future endeavours to show solidarity with Baghdad.

Also, Kurdish militants siding with Syria will be a disaster for Turkey. Kurds and the Russia-backed Bashar-al-Assad regime had indicated earlier that they will coordinate with each other to push back Turkey in Northern Syria.

Erdogan has made a blunder and now has good reasons to fear since he faces an absence of support from both Russia and Iran in Syria. Erdogan would be digging up his own grave if he now treads forward with his supposed aggression on Damascus.