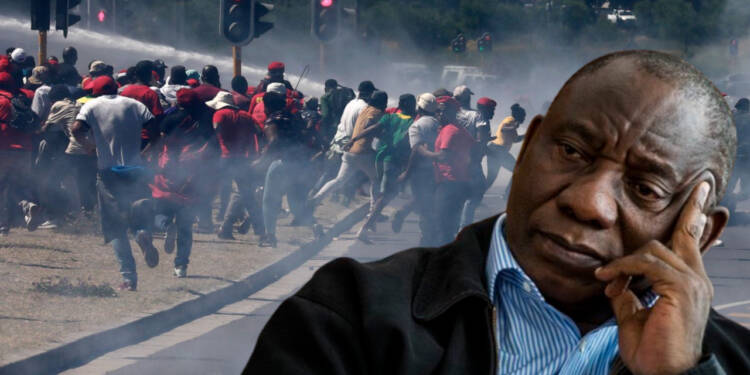 A new version of ‘Arab Spring’ is about to take birth in South Africa. Amidst economic recession and stagflation expanding roots in the US, Europe and other leading economies such as Canada and Japan, South Africa is no exception. Against the backdrop of worldwide turmoil, South Africa’s battered economy can hardly escape unscathed.

At the moment, South Africa is certainly witnessing no growth in its economy, in lieu, it is likely hitting the ground.

“We forecast real gross domestic product [GDP] contracted quarterly in Q2, and expect sluggish growth in the quarters to follow. The possibility of more intense load shedding in Q3 could see the economy enter into a recession,” said Jee-A van der Linde, an economist at Oxford Economics South Africa.


South African economy is in tatters


Moreover, the confidence has now begun collapsing. Confidence– needed if consumers are going to consume and businesses are going to invest — has been gutted. Apart from that, the interest rates are also seeing a hike. When the Monetary Policy Committee (MPC) of the South African Reserve Bank (SARB) meets later this month, interest rates are likely to increase even more. The MPC has increased its key repo rate from a record low of 3.5 per cent to 4.75 per cent since November of last year, raising the prime rate to 8.25 per cent. Another increase of at least 50 basis points is undoubtedly on the horizon.

Economy of South Africa is ‘spiralling into stagflation’ as a result of the potential for a recession, rising inflation, and a jobless rate of more than 34%. This word is being bandied about even in affluent countries with historically low unemployment rates, like Canada.

Read More: South Africa was once counted among top developing economies; Zuma turned it into a mess

Certainly, the perturbed youth is now up in arms against the ruling African National Congress Party. Former South African president Thabo Mbeki also took a jibe at the state of affairs and launched a rare attack last week on the incumbent president Cyril Ramaphosa. According to Mbeki, there is such a high level of public anger with the administration that the nation may be headed for its version of the revolt known as the “Arab Spring,” which began in 2010 and expanded to many Arab countries, toppling their governments.

“One of my fears is that one of these days, we’re going to have our own version of the Arab Spring,” said Mbeki.

“South Africa has a ticking time bomb of youth unemployment and the combination of the post-Covid world,” independent political analyst Asanda Ngoasheng said.

This may be related to the pandemic, from which South Africa and the rest of the world both suffered. Furthermore, South Africa’s incompetent government failed to deal with the pandemic’s aftershocks. This has caused the youth in South Africa to feel extremely unsatisfied.

The citizens may now take down to protest on roads and will fight tooth and nail to topple Ramaphosa’s government. Ergo, if South Africa wants to save itself from seeing a civil war-like situation, the current government should address unemployment and poverty to curb the emanating discontent Otherwise, nobody can stop South Africa from experiencing its own version of “Arab Spring.”

Read More: South Africa was once debarred from Cricket over Apartheid, this time an anti-White apartheid has begun