Chinese drivers get blown up while driving faulty cars amid heatwaves

The increasing cases of Chinese vehicles getting blown up on roads might keep the potential buyers miles away forever. 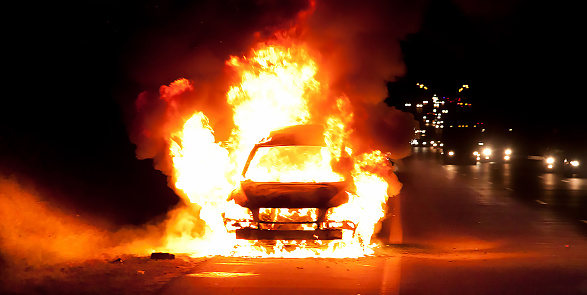 A heatwave has engulfed Europe and other countries worldwide. China too is experiencing unprecedented levels of heatwaves.

The record heatwave has caused high number of spontaneous automobile fires and explosions. It has exposed the safety issues with the infant electrical vehicle industry in China.

On July 24, in Fuzhou, Jiangxi, a private car that was parked on the side of the road suddenly burst into flames. Videos show how the car door and glass fragments were hurled out onto the street, nearly hitting a pedestrian.

Additionally, on July 23, two other incidents of car fire were reported in Yibin, Sichuan and Zhongshan, Guangdong. The cars suffered significant damages.

According to Chinese media, high temperature and heatwaves have impacted Chinese electric vehicles way more than fossil fuel-powered vehicles. In China, there have been several instances of electric vehicles spontaneously blowing into pieces, spanning different brands and models.

Recently, the data for the first quarter of 2022 released by the Fire and Rescue Bureau of the Ministry of Emergency Management showed that 19,000 cases of fire and explosions in vehicles were reported, a year-on-year increase of 32%.

Zhang Xiang, Dean of the New Energy Vehicle Technology Research Institute of Jiangxi New Energy Technology Vocational College said to “Securities Daily”, “The current safety problems of new energy vehicles mainly revolve around the spontaneous combustion, fire or explosion of the battery. Whether the battery can guarantee the safety when it is deformed or squeezed is the key.”

A Chinese company, CATL whose worth is more than General Motors and Ford combined, is already under scrutiny that the technology used by it causes car fires. Beijing has provided CATL with generous subsidies and soft regulatory treatment, enabling it to devise important EV technology. CATL delivers electric batteries to the majority of these Chinese companies.

At the recently conducted 2022 World Power Battery Conference, Sun Jinhua, lead scientist for China’s “937” plan and an academician of the European Academy of Sciences, said that judging from the state of the electric vehicles on fire, 35% are in a charging state, 40% are in a driving state, and 25% are in a stationary state. Jinhua further said that lithium-ion batteries are prone to accidents.

CATL and Chinese companies like BYD use substandard batteries, which shows the pitiable state of power battery technology in China. The Chinese companies are actively looking forward to taking over the EV market of the world. However, the increasing cases of Chinese vehicles getting blown up on roads might keep the potential buyers miles away forever.