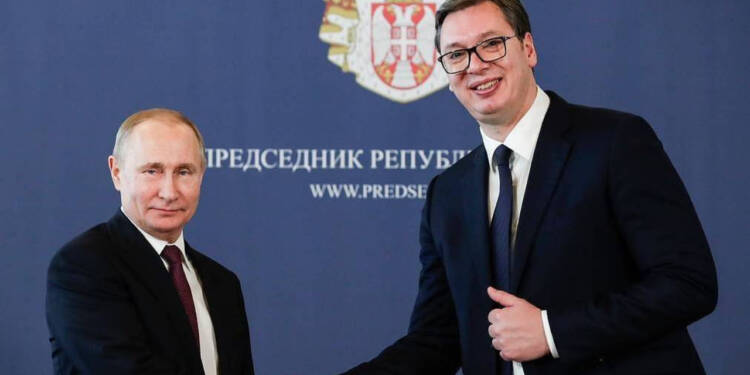 14 years after Kosovo declared independence from Serbia, everything is coming back to square one. Recently, tensions in the Balkans have risen again as a result of Kosovo’s controversial behaviour, which has sparked a severe backlash among Serbs.

As a war looks like a real possibility now, we have a warning note for Kosovo, don’t fall in the trap of NATO, or else you will be damned.

The conflict between Serbia and Kosovo has remained a knotty problem for decades. In 1999, Kosovo separated from Serbia, and it proclaimed its independence in 2008. Almost every NATO ally recognizes Kosovo as an independent nation.

But, Serbia has not acknowledged Kosovo and it still asserts its claim over the region. A few days ago, Kosovo announced mandatory ID card and license plates for Serbs to enter their region. After which, there were reportedly major border clashes between the two.

According to local media, air raid sirens were also heard along the Kosovo-Serbian border, so the situation is pretty grim as of now. Furthermore, NATO is doing what it usually does, i.e. adding fuel to the flames.

NATO may enter the region

NATO’s Kosovo Force (KFOR) has declared its readiness to act if stability is jeopardised in the northern towns of Kosovo where skirmishes have been reported.

The official statement of KFOR pitches: ”The overall security situation in the northern municipalities of Kosovo is tense. The NATO-led KFOR mission is closely monitoring and is prepared to intervene if stability is threatened, in accordance with its mandate, which emerges from UN Security Council Resolution 1244 of 1999,”

Security forces are being put in place in Mitrovica, which is located near the Serbian border. For a long time, it was expected that NATO would enter the escalating war and exacerbate the situation.

Well, Kosovo must be walking on air thinking it has NATO on its side and it could easily defeat Serbia. But, it’s not going to happen.

Read More: A full blown Serbia-Kosovo War is well on its way

Serbia has the advantage

When we take all factors into account, Serbia is clearly ahead of Kosovo, and Kosovo’s chances of winning are extremely slim.

First of all, Serbian military is way ahead of Kosovo in terms of strength. The Kosovo Security Force (KSF) consists of just 3,500 personnel. Whereas, Serbia has about 25,000 active duty personnel (15,000 from the Land Forces, 5,000 from the Air/Air Defense, and 5,000 from other forces).

Kosovo only relies on one thing, i.e. NATO forces and equipments. KSF is equipped with small arms and light vehicles and that too is provided by NATO. It relies on donations and since 2013 has received donated equipment from Turkey and the US.

Whereas, Serbia consists of Russian and Soviet-era weapons systems out of which, most of them have been imported from Russia. And we all know that Serbia would surely get more aid from Russia when it desires. We are saying this because Russia has already backed Serbia’s position regarding Kosovo.

Russia has warned Kosovo to respect the rights of Serbs in Kosovo and to stop “provoking” on the behest of the EU and the US. The Russian Foreign Ministry spokeswoman Maria Zakharova said: ”Such a development of events is more evidence of the failure of the mediation mission of the European Union. This is also an example of what place Serbia has been prepared for in the European Union by offering Belgrade to de facto put up with the lack of rights of its compatriots,”

To us, it seems highly unlikely that NATO would actually take the battle seriously. The newly formed Kosovo is merely depending on NATO, which is already overburdened by the escalating conflict in Ukraine. Almost all allied nations have drained their money and weaponry into Ukraine. Despite this, Russian soldiers have suffered minimum damage as a result of their actions.

Furthermore, NATO has not deployed its troops within Ukraine to defend the Ukrainian territory, so it would be foolish of Kosovo to expect any help from NATO.

Read More: NATO with Kosovo, China with Serbia and a mini world war in the making

The US-led NATO alliance is attempting to portray itself as the savior of Kosovo, but trust us when we say that NATO would retreat the very moment Russia enters the equation.

In other words, Kosovo would become Ukraine 2.0 if a war breaks out.