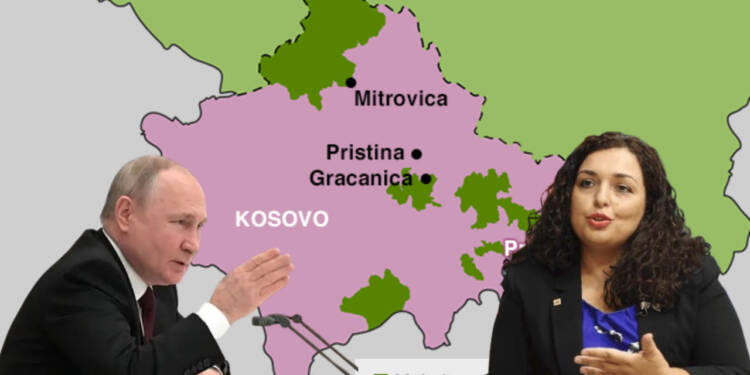 Kosovo had presented itself as a brave country willing to accept Serbs into Kosovo without mercy just 24 hours before. There were heavy protests and mass-scale unrest; The situation deteriorated to the point that war was anticipated to erupt.

Kosovo on the behest of the west was ready to annihilate Serbia, but, one statement from Moscow changed it all, Kosovo has backtracked and NATO’s ambition to invade Serbian regions now falls flat…

According to Radio Free Europe, Kosovar authorities have suspended issuing documents to Serbs entering the country after agreeing to delay the implementation of two regulations regarding automobile license plates and ID certification.

The controversial order by the Kosovar authorities had triggered unrest within minority Serbs. There were heavy roadblocks, air raid sirens, and gun firing into the air. The KSF i.e Kosovar military took cognizance of the matter, but the unrest was already unbearable for them.

To matter worse, NATO forces were also ready to hop in. NATO’s Kosovo Force (KFOR) had declared its readiness to act if stability is jeopardised within northern towns of Kosovo where skirmishes have been reported.

For those who don’t know, the regulation bought by Kosovo was also prepared under the guidance of U.S. and European Union representatives. This demonstrates how thoroughly thought out the idea was.

Kosovo was all set to thwart Serbs. But, one single statement from Moscow made Kosovars cold sweat.

Russia has accused “radical” Kosovo of trying to isolate Serbs from the country’s northern region by enforcing new border laws that have stoked new hostilities. Moscow has asked the US, EU, and Kosovo to put a halt to these “provocations” and respect the rights of Serbs in Kosovo.

Maria Zakharova, spokeswoman for Russia’s Foreign Ministry has stated: ”Kosovo’s new rules on the issuance of personal documents and license plates for local Serbs constitute another step toward their expulsion from Kosovo”.

She furthermore added: “Such a development of events is more evidence of the failure of the mediation mission of the European Union. This is also an example of what place Serbia has been prepared for in the European Union by offering Belgrade to de facto put up with the lack of rights of its compatriots,”

The consequences of Russia’s severe warning to Kosovo began to manifest consequences within a day. Kosovo reneged on its own promise to put the new legislation into effect and declared that the implementation is delayed as of now.

Kosovo’s armed forces have also started to remove barricades that were put up to stop Serbs from entering Kosovo. Kosovar Interior Minister Xhelal Svecla publically announced: “As we promised last night, as the Government of the Republic of Kosovo, by removing barricades and ensuring freedom of movement for our citizens, we moved the implementation of the decisions, in order to maintain stability in the country and the region”,

There are talks that the new legislation would be implemented next month, but, that seems highly unlikely. Simply said, the fact that things are calming down indicates that the legislation issue is dumped, as protests would have continued otherwise.

Russia-backed Serbia is no match

Kosovo understood very clearly that if Serbs gets the support of Russia, their blueprint of integrating Serbia would fail miserably. Serbia already has a substantial number of military systems from the Soviet era, most of which were purchased from Russia. In addition, Russia has recently made it clear to the world that if things get worse, it is prepared to save Serbs.

Furthermore, Kosovo relied only on one thing, i.e. NATO forces and equipment. The newborn baby was merely depending on NATO, which is already overburdened by the escalating conflict in Ukraine. This is the reason why Kosovo’s Jingoism against Serbs stopped before even the start.

41 Emancipate Yourself from Mental Slavery Quotes