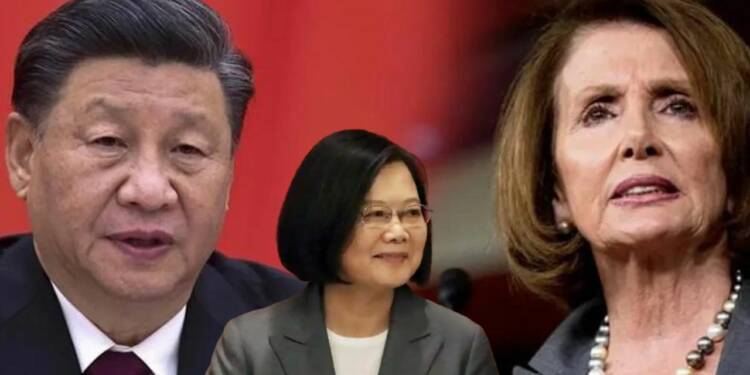 Yesterday, burning paper dragon China and the world power USA were all set to fight like mad mongrels over Taiwan. As the US House speaker was all set to visit Taiwan, China’s military announced it is on “high alert” and would “launch a series of targeted military actions in response” to the visit.

However, Pelosi is now in Taiwan, and China has not even begun the purported military strike it had proclaimed. The US is now completely mum because Biden’s sole purpose of gathering some political points ahead of the midterm elections is now achieved. But for Taiwan, the problems are never-ending.

Taipei is trapped in a vicious circle, every time it sought help from Washington, the White House replies in the best way possible and this time it has been no different. Through collaboration with CCP, Democrats have given Taiwan a $600 million jolt.

As per a report of Nikkei Asia, the ban includes products from at least 50 categories of imports ranging from vegetables, cookies, cakes, drinks, and fresh seafood. Beijing has announced that these products would be now listed as “suspended”.

Currently, more than 2,000 individual items are suspended, which makes up about two-thirds of some 3,228 items registered as food imports from Taiwan, which were initially set to terminate in 2027.

But, US’ polemical action made Beijing act ahead of the deadline.  A ban on Biscuits and baby food may look like a very tiny effort, but for Taipei, it’s absolutely not. The ban incurs Taiwan a whopping loss of $600 million.

According to data from Taiwan’s Finance Ministry, Taiwan exported food, beverages, and alcoholic beverages to China worth $683 million last year. This year, Taipei sent $183 million worth of food and beverages in the first half of this year as viral lockdowns in Shanghai and other big cities reduced demand.

This demonstrates China’s heavy-handed attitude to dictate the China-Taiwan relationship. Only one country, or should we say, one individual is to blame: US President .

Read More: Biden casts out Taiwan like a leper

The US is not at all helping Taiwan

One must agree that the US might be doing anything, but not helping Taiwan. Every day, reports of increased China’s aggression in Taiwan come, but there is no real support for the island from the US.

The US makes every effort to avoid assisting Taiwan despite having commitments to give it the weaponry it needs to defend itself. The so-called powerhouse, however, is unable to do so.

The USA is delaying the shipment of essential military supplies to Taiwan. There is currently a delay of M109A6 Paladin self-propelled howitzers that were supposed to arrive on the island between 2023 and 2025.

Taiwan also sought membership in the IPEF framework, which the US considers an essential agreement to keep a check on Chinese economic activities in the Indo-Pacific region. However, the US keeps the nation excluded from it.

The steps which would have really mattered for Taiwan have been ignored altogether by the US.

Joe Biden might not be a China-dovish president but, he’s definitely not a China-hawk. Make no mistake, the Paper dragon would never invade Taiwan until situations are ripe. This sudden love for Taiwan before midterms in the US is purely to gain political points and as we have said earlier at TFI, all this drama was staged. So, it would not be unfair to say, Nancy Pelosi didn’t just come to Taipei; she brought a $600 million jolt too with her.