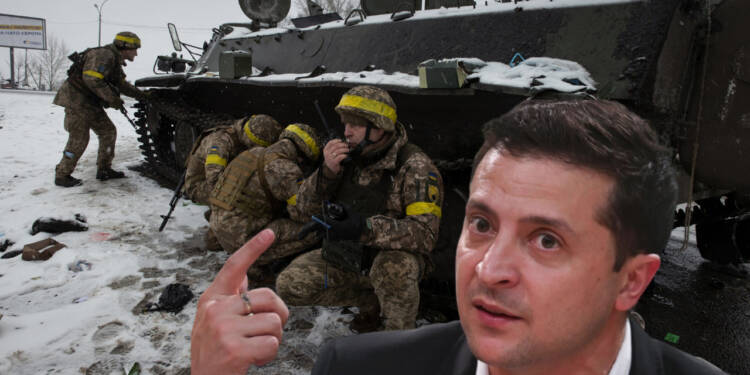 There should be no doubt that the Russian military is significantly superior to that of Ukraine. Furthermore, prior to the war, the Ukrainian Army was nothing more than obsolete machinery that had never seen serious combat.

Comparing Russia and Ukraine is like comparing apples to oranges. However, the Ukrainian troops should be commended for their bravery in surviving the perilous war trap.

And you will be surprised to know that, this war trap, however, was not laid by Russia. The groundwork to eradicate the Ukrainian army was laid by Volodymyr Zelensky, the president of Ukraine.

This week, Ukrainian President Volodymyr Zelensky gave an interview to the Washington Post during which, the ‘Herculean President’ was seen justifying his failure to share important intelligent reports with common Ukrainians. The President confirmed that he purposely denied sharing the details of repeated U.S. warnings of Russia’s plan to invade Ukraine.

As per Zelensky, if he had shared the important intelligence, Ukrainians would have panicked, fled the country, and the economy would have collapsed. Zelensky asserted: “This is the reason why I chose not to share the stark warnings passed on by U.S. officials regarding Russia’s plans.”

Through Zelensky’s words, it may sound like, he didn’t want to provoke panic and wanted to alleviate the impact of the invasion. But, you’re getting the wrong end of the stick. Zelensky tricked common Ukrainians and the military through his idiotic act and hallucinated the country by proclaiming that the Russian invasion is not happening.

On 24th February 2022, Russia officially declared its military operation in Ukraine. At that time, it was pretty clear that Ukraine’s days are numbered. The military was not prepared for the invasion at all, the whole army was scattered, weaponry was empty and most importantly, Kyiv had no frikking strategy to stop the Russian invasion.

If Zelensky would have shared vital information with Ukrainians, the situation could have been much better. But, ‘people’s hero’ had different plans to save his nation. In the midst of the war, the Ukrainian President took the first step to trap common Ukrainians. He unilaterally declared the Ukrainian war to be a “people’s war.”

Further, he proclaimed that common Ukrainians will fight for Ukraine. Zelensky stressed, “We will fight as long as we need to. Even if children are born in shelters, the enemy will have no chance in this People’s War,”

Then, the Ukrainian president immediately declared that men would not be permitted to leave the nation. He emphasized that Ukrainian men must protect their nation from Russian forces and that anyone who steps forward will be provided a weapon to fight with.

With this, the fate of most Ukrainian young men was sealed. Even though they were not willing to fight, they were made to serve the army. They were forcefully separated from their families against their will.

Did such a nonsensical act help Zelensky or even Ukrainian Forces? The answer is a big No.

The Ukrainian Military was not at all ready for the war. Even Serhiy Haidai, the head of the Luhansk province’s regional war administration,  admitted the fact that many of the Ukrainians who participated in the fighting lacked the necessary military training.

Moreover, many Ukrainian volunteers said in a video sent on Telegram that they are no longer willing to fight because they lack military hardware, rear support, and capable leadership. Several fighters have even claimed that they are only given 30 bullets to practise with before fighting.

The ‘Heroic’ President’s admission that he purposefully withheld crucial intelligence information from ordinary Ukrainians only proves that he cleverly conned them into fighting against Russia.

Some brave and clever decisions could have saved Ukraine, but, Zelensky opted for tragedy and misery instead.

A Collection of the Best Ice Cube Quotes and Captions