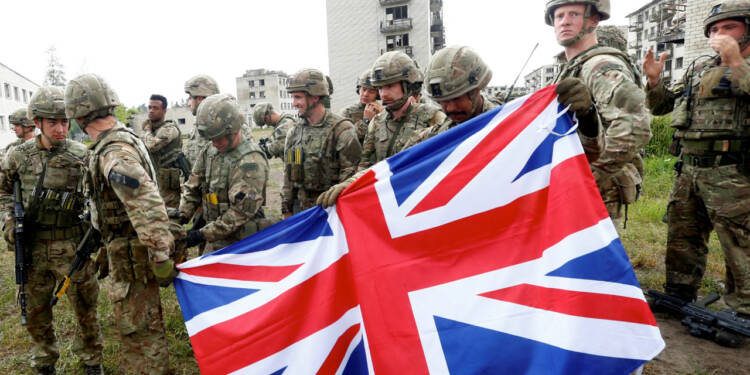 The unconquerable Great Britain of the past is not so great today. The sole superpower of the world in the 19th century is struggling today to guard its own territorial waters. The country that controlled the economies of giants like India and the USA is witnessing the most significant economic downfall since 1709.

The UK is without a leader, the elections are being postponed and the country is completely under US influence which is compelling London to donate its resources and defense systems to Ukraine.

While the country is clinging to its centuries-old monarchy, multiple Russian warships navigated into the Irish sea recently. At least three Russian navy ships have been seen returning from the Mediterranean to their home port in the country’s north, including the gigantic cruise missile ship, Marshal Ustinov.

The UDALOY class destroyer Vice-Admiral Kulakov and a tanker, Vyazma, are with the Ustinov. Under international law, Russia is allowed to sail through the Irish Sea as long as it remains outside Irish and UK territorial waters, which extend about 22 kilometers off each country’s coast.

The warships were forced to take a U-turn after making the proactive move onto UK shores. The Royal Navy Duke-class frigate HMS Lancaster shadowed the warships amid concerns that they were preparing to transit through the Irish Sea between the UK and Ireland.

However, the route opted by Russian warships has been completely unconventional and is presumably a direct threat to the UK for their continued actions against Moscow. The move could also be seen as Russia’s interest in solidifying relations with Ireland which is currently assisting Northern Ireland in getting independence from the UK.

Read More: US is flooding Europe with ‘mini nukes’; the first step towards Europe’s destruction

But, one might wonder? What made Kremlin make this high-profile move?

Well, we understand that the British aren’t as powerful as they used to be but they still are a nuclear power.

You see, The caretaker PM – Boris Johnson could comfortably be attributed to being the initiator of this tragedy. Johnson was ousted from his post after lawmakers pulled their support from his government.

During his meeting with the French President Macron in June, Johnson paraphrased 1984’s infamous “war is peace” slogan. According to the official London readout of their meeting at the G7 Summit in Germany, “the Prime Minister stressed that any attempt to settle the conflict now will only cause enduring instability and give Putin license to manipulate both sovereign countries and international markets in perpetuity.”

You see, it is entirely clear that the UK backed by the US wanted to prolong the conflict to weaken Moscow at the expense of thousands of Ukrainian lives.

The UK was working entirely under the instructions of Washington from the very beginning of the war. Johnson opted for war and supported US President Biden in helping fuel the war by giving away a plethora of resources.

UK’s assistance to Ukraine has come to bite in the back. Head of the British armed forces, Tony Radakin has stated that the United Kingdom has taken a deep toll on its weapon stockpile, it may take years to rebuild the stocks to the level before the Ukraine war.

The pressure of low stockpile is so intense that Lord West, the former head of the Royal Navy has called for PM Boris Johnson to start producing weapons “almost on a 24/7 basis.” as UK’s weapons stockpile is “insufficient”

Johnson has essentially crippled the UK defense system which has now allowed Moscow to make advances on London. The country is without leadership and any response to the Kremlin might not be on the books.

One might think that the Russians wouldn’t be able to stand when the EU and the USA come to Britain’s aid. However, it is practically a far-fetched dream. Most of the UK’s allies in the EU are under the grip of high inflation and looking to revamp energy supply from Russia, therefore they probably would not support London against Moscow.

Similarly, the US just went into a recession and Biden would not overstretch the US’ capabilities if he wants to stay in power for long.

It is indeed true that the Brits are on their own this time and ironically the orchestrator of this tragedy still remains the caretaker PM of this formerly great nation.