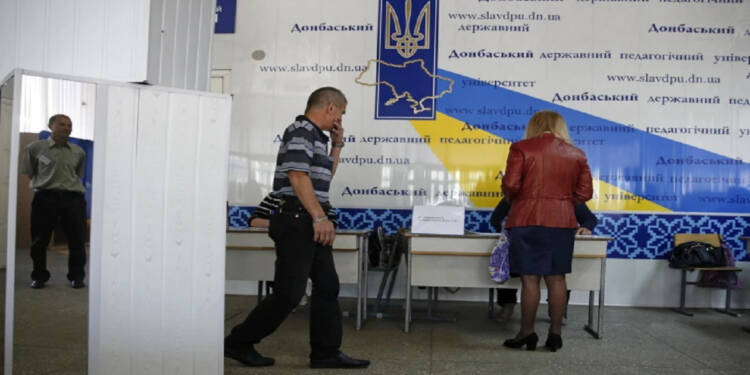 Donetsk and Luhansk are about to break free from Ukraine. An election in the form of a plebiscite that will result in the Russian-occupied territories’ independence from Ukraine is about to happen and it is set to offer citizens of these regions a new hope.

This referendum will also reveal a lot of things and clear up a lot of confusion. However, Mr. President and his officials are restraining as well as threatening the residents of DPR and LPR to reject the vote.

The reason behind this is pretty obvious; Mr. President fears that Russia will succeed in its goal. But, more than that, Zelensky is afraid that Ukraine’s true neo-nazi face may come to light.  That is why; Ukraine is not at all interested to end things once and for all.

Using his carte blanche over citizens of Donetsk and Luhansk, Zelensky is trying to instigate fear among the citizens of Russia occupied territories.

The deputy prime minister of Ukraine, Irina Vereshchuk, has reportedly issued a stark warning to the residents of “Eastern Ukraine” that participating in referendums, in areas under the influence of Moscow would be a criminal offense.

According to her, Ukrainian citizens’ would risk facing criminal prosecution and jail time of up to 12 years if they participate in referendums on joining Russia.

During a national broadcast, Deputy PM Vereshchuk stressed, “There are not and will not be any referendums on our Ukrainian land, It is all a farce and a circus. But for our citizens who will take part in this, there is actually an article in the Criminal Code,”

Vereschuk also advised those living in areas under Russian authority to flee or refrain from participating in any plebiscites, as “no pressure, no violent incitement, etc., can later justify the fact that a person went to the referendum.”

A referendum everyone eyes upon

Regions of Donetsk, Luhansk, Zaporizhzhia, Kharkiv, and Kherson have expressed their willingness to organize referendums on joining Russia. The dates however are yet to be finalized.

Kyiv claims that referendum of Russia is dubious and simply serves as a non-military justification of its occupation.

Such comments are also echoed by the west. However, they are more than willing for the referendum to take place, as it will reveal a lot about Ukraine.

The upcoming referendums have the potential to dispel the gloom surrounding the conflict in Ukraine. And honestly, the battle in Ukraine needs to be thoroughly investigated by mankind.

Some Answers, Some questions

Russia has always referred to its military intervention in Ukraine as a “military operation” since the very first day of the war.

Vladimir Putin, has always claimed that military action was urgently required to ‘DE Nazify’ the region and safeguard people in eastern Ukraine, particularly in the regions of Donetsk and Luhansk.

However, Ukraine criticizes Russia’s intervention citing that Donetsk and Luhansk have always been Pro-Ukraine and there are no traces of ‘neo-nazis’.

But, past data states otherwise. Ukraine does have a past of so-called heroes who acted as Nazi sympathizers and even collaborators during the Second World War.

Furthermore, Zelensky’s puppy crush ‘Azov Battalion’ is also a neo-nazi militant group. Nazi emblems were formerly worn on the Azov’s military uniforms, and pictures of its fighters with Nazi tattoos are also available on the internet.

These neo-nazis have had a terrible history in Eastern Ukraine. People have constantly lambasted the Ukrainian government for their blatant support for the Azov Battalion forces that have wreaked havoc in the region.

If one remembers, the arrest of the Azov battalion proved to be Ukraine’s Achilles’ heel. Zelensky literally attempted to put them down, out of fear that Ukraine’s neo-nazi ties will be revealed to the public.

Now, if the separatist regions do vote for Russia in the referendum, Ukraine’s neo-nazi ties may prove to be accurate.

A ‘proper referendum’ would fulfill main objective of Russia of de-nazifying Ukraine, but it would be a serious setback to Ukraine, which has always rejected the presence of nazism in the area.

This might be the reason why Zelensky is opposing the plebiscite and trying to stir up a hornet’s nest in Eastern Ukraine.