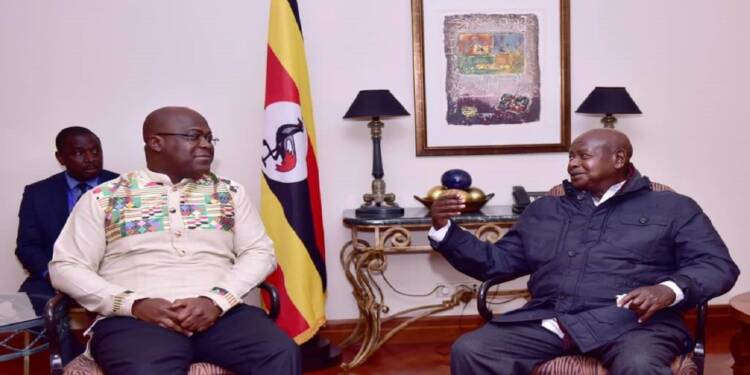 The African countries have up till now been oblivious to the reality that they have been utilised as a pawn by the west for its own purposes. In a sense, this has caused instability to practically spread across the whole of African continent. These African countries occasionally experienced political upheaval and civil strife. And it’s all because of the West’s covert meddling.

But it seems these African nations have realized that self-fragilisation was Africa’s number one problem. They have realized that they have themselves given this opportunity to the west to exploit them. In this realization, Uganda and DRC have taken the first move to set an example for the rest of the African countries. The Ugandan government has paid $65million to the Democratic Republic of Congo government in partial payment for war reparations, amounting to $325 million. Both the countries have decided to set aside their past and start afresh, thus giving an example to fellow countries in the continent as well.

Throughout their history, African nations have experienced political turmoil and civil wars for a variety of reasons. The struggle for resources, colonisation, and foreign influence are a few of these causes. Today, many African nations, including Ethiopia, Eritrea, Rwanda, and Sudan, are experiencing civil unrest akin to earlier instances in history. These nations are beset by disastrous armed conflicts that have led to a catastrophic breakdown in law and order and opened the floodgates to carnage, social unrest, hunger, and famine.

As seen by the recent wave of suicide bombings by hard-line Islamic terrorists in the East African nations of Kenya and Tanzania, these two countries have emerged as the focal points of anti-Western and anti-Israeli movements in Africa that are inspired by Al-Qaeda.

Similarly, stability and national democratisation in the region are severely hampered by the ongoing enmity between Uganda and the DRC. The invasion of the DRC by Uganda between 1996 and 2001, which the Ugandan government described as a “hot pursuit” of rebel dissidents of the Allied Democratic Forces (ADF) was primarily responsible for the escalation of animosity (ADF). A full-fledged regional war that included Rwanda, Angola, Burundi, and Zimbabwe and resulted in the deaths of up to 5 million people was sparked by the invasion.

Since the discovery of oil, the dispute between the two nations has centred on their unclear borders and who is the rightful owner of the strategically important Rukwazi Island, which is situated in the oil-rich southern tip of Lake Albert.

Setting up an example

However, in an effort to set a strong example for the entire continent, these two countries have decided to put their differences in the past and work towards development and normalisation of the situation.

The Democratic Republic of the Congo has received the first installment of 65 million from the Ugandan government as part of war reparations.

“The payment of this indemnity is made in five installments of $65 million. The first had just been paid,” the DRC government spokesperson, Patrick Muyaya said recently.

In February, the top court of the UN, the International Court of Justice, ordered Uganda to pay the Democratic Republic of the Congo $325 million (Shs1.1 trillion), which was far less than the $11 billion the country had requested as reparations for the conflict that lasted from 1998 to 2003.

Nevertheless, civil conflict currently affects 20% of the population in Sub-Saharan Africa. Less than 7 percent of the region’s countries are expanding annually, which is the pace required for Africa to achieve the worldwide development goal of halving poverty. Furthermore, the performance of Africa’s growth varies significantly per sub region. Realizing this, it is a really sensible move on the part of these nations. Moreover, it’s better late than never!

Zelenskyy captured 8000 Ukrainian men and dropped them on the frontlines