Zelenskyy captured 8000 Ukrainian men and dropped them on the frontlines

Zelensky promised the citizens to take up arms and all their needs will be taken care of, but now they realized that only death is waiting for them on the battlefield 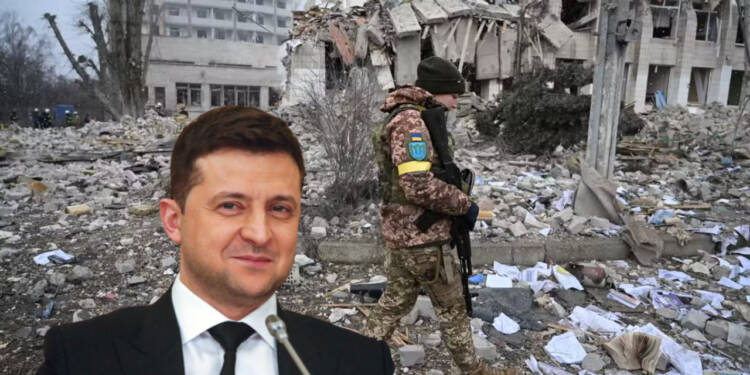 On February 24, the day Russia began its military campaign against the nation, the Ukrainian government imposed martial law. It is still in effect and the Ukrainian parliament has repeatedly renewed it, since then.

Under Ukrainian military law, males between the ages of 18 to 60, who are required to serve in the military, are forbidden from leaving the nation.

However, a recent report suggests that not many are happy with compulsory military service. Authorities in Ukraine have reported that since late February, thousands of males who were attempting to avoid military conscription have been arrested at the country’s border.

The State Border Service of Ukraine produced an infographic and a statement with it, recently, claiming that “since the introduction of martial law border guards have apprehended more than eight thousand dodgers for attempting to illegally cross the border.”

Among those, 5,600 attempted to leave the country without using the authorised checkpoints. This led to an increase in the cases of bribing of officials. The total amount paid as bribes to officials, by 245 additional dodgers, reached up to 3.8 million Ukrainian hryvnias ($103,700).

Authorities in Ukraine frequently publish images and videos of draught dodgers detained. The intention is to ridicule people who’re trying to flee so that others don’t attempt to follow the same path. Some of the individuals in question used creative methods to hide, such as hiding in a train bathroom or even a van’s baggage area.

How desperate must one be to get out of the country that he pays bribes at checkpoints or hides in the train’s lavatory? Well, a lot! And they have a reason for it.

When the war started, Zelensky promised the citizens to take up arms and all their needs will be taken care of! Kyiv had also promised Ukrainian military training and modern equipment to them!

However, soon they realized what patiently waited for them, in the woods and on the battlefield, was all but death and misery.

Read our premium piece: The Ukrainian army has had enough of Zelensky; the mood is changing now

Serhi Lapko, a Ukrainian military commander, fighting on the frontline said, “We are praying to stay alive.” The scared commander further said, “They [Russians] already know where we are, and when the Ukrainian tank shoots from our side it gives away our position. And they start firing back with everything — Grads, mortars.”

Lapko, then, gives a detailed account of how their superiors have left them in the lurch. He said, “Our command takes no responsibility. They only take credit for our achievements. They give us no support.” Now, he, along with his company, has decided to retreat, and he fears that they could face a court-martial and time in military prison.

Not be mistaken, it’s not the story of Lapko alone; thousands of civilian volunteers and soldiers, who have been battling with the second-most powerful military on the planet, feel the exact same way. They feel cheated and livid at Kyiv. To add salt to the wound, Kyiv is imprisoning soldiers who are denying to fight!

Kyiv’s soldiers know Ukraine is losing, but Zelensky’s appetite for blood knows no boundaries! The regime in Kyiv is adamant about prolonging the war till the year-end, but the response from the men in uniform indicates that this strategy could very well backfire.

Interestingly, Zelensky himself had accepted the loss of soldiers, in June. He had said, “The worst situation is in eastern Ukraine and south of Donetsk and Luhansk. The situation is very difficult. Every day we lose 60-100 soldiers in battles and we have about 500 wounded. We are keeping our defensive perimeter.”

We are about 200 days into the war and 100 losses every day simply means that the country has lost around 20,000 soldiers, so far, against Russia. Importantly, the number of wounded soldiers, those who can no longer be deployed on frontlines, might have risen to 100,000.

This means that out of Ukraine’s 240,000 soldiers, 100,000 are no longer present on the ground to fight. In other words, the Ukrainian army has been rendered into a harmless paralyzed force by Putin’s men.

This fear has driven the Ukrainian men to flee the country. They know that they would be nothing but just fodder for the Russian army. Therefore, they are using desperate measures to leave their own country.

Honestly speaking, Ukraine’s loss in the war was inevitable; a foregone conclusion. One must realize what Ukraine was actually fighting against. Ill-equipped, poorly trained Ukrainian soldiers were mercilessly deployed against the world’s second-most powerful military without proper assessment and deliberations! If it is not madness, then what is it?

Collection of 28 Petty quotes and captions