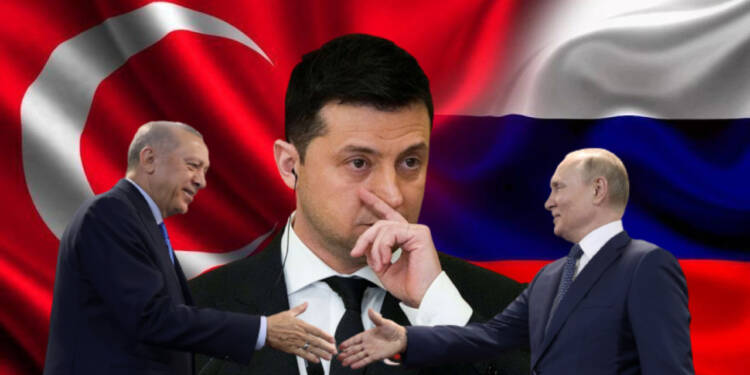 Ukrainian President Zelenskyy is pretty famous for his impulsive decisions. His resolve to go to war with the mighty power Russia has been one such decision. Since then, the entire world has witnessed him acting like a lunatic and making poor choices.

Recently, he made yet another colossal mistake by urging restrictions on Turkish businesses operating in Russia.

A change of heart

Nevertheless, till now Erdogan and Zelensky were seen to mingle up, especially for the deal of Bayraktar TB2 drones. Erdogan supported Ukraine by supplying it with its infamous Bayraktar TB2 drones in its war against Russia. Now that Zelensky is threatening to impose restrictions on Turkish companies operating in Russia, the issue is: what caused this change in the equation between the two nations?

No doubt, Erdogan, the president of Turkey, has worn the hat of hypocrisy for far too long of late. Ankara’s inconsistent foreign policy has occasionally irritated Moscow. Turkey failed to take a comprehensible stance on the Russia-Ukraine war. But mostly, it was seen as following the Western agenda and hence, supporting Ukraine directly or indirectly in the war.

But lately, there seems to be a change of heart in Erdogan. He has been seen supporting Putin, in various stances. For example, lately, when Erdogan was on his visit to Balkan countries, he gave certain pro-Russian statements. He criticized European countries which have imposed sanctions on Russia.

At a press conference before leaving Ankara, Erdoğan told reporters at a news conference that Turkey did not experience a natural gas supply issue and would, therefore, not take the same kind of steps as European nations since “Europe has reaped what it has sown.”

“Of course, Europe’s attitude towards Putin, the imposition of sanctions, has inevitably brought Putin to the point of saying ‘If you are doing this, I will do that,’ and Mr. Putin uses all the means and weapons at his disposal,” Erdoğan said.

He further stated, “Russia is not a country to be underestimated. Russia has now cut off natural gas to Europe, and prices suddenly rose. Now everyone is wondering, ‘How will we get through this winter?’ Why didn’t you think of that before?”

Read More: As Russia plans to launch its own space station, Biden hits the panic button

Erdoğan also accused the European leaders of a lack of foresight, saying, “When everyone attacked Putin, Russia was going to use all the means and weapons at its disposal, it was that simple.”

Another occasion where Erdogan recently adopted a pro-Russian position was at the Sisak Islamic Cultural Center’s opening ceremony. Vladimir Putin, the President of Russia, is “correct,” he claimed, in that grain from Ukraine “sadly” ends up in rich nations rather than poor ones.

In turn, Zelensky, who probably found Erdogan’s role as Putin’s trojan horse in Europe to be grating, made another rash decision to impose restrictions on Turkish companies operating in Russia.

Restrictions against Turkish companies operating in Russia have been demanded on the “War & sanctions” website, which is endorsed by the Ukrainian Foreign Ministry. According to the website, which calls itself “the largest database of sanctions imposed over Russia’s aggression on Ukraine,” it has the backing of both the National Agency on Corruption Prevention and the Ukrainian Foreign Ministry. Additionally, it includes listings of organisations and people “that are currently subject to sanctions” as well as those “that have already been subject to sanctions.”

This action hasn’t come as a surprise given Zelensky’s impulsive personality. Nevertheless, Erdogan now more than ever needs Putin’s backing, due to the following two factors:

One, Erdogan needs Putin’s help to get out of this predicament because Turkey’s economy is in ruins.

Two, the upcoming 2023 presidential elections. Political analysts think Erdogan wants to use military action, in Syria before the elections in 2023, to boost his popularity and reduce the growing power of the opposition. Naturally, he requires Putin’s consent to conduct such a military campaign in Syria.

Considering the fact that Erdogan clearly trying his best to get Putin’s support by any means, it is not wrong to say that he has jumped into Putin’s lap causing Zelensky to flip out.