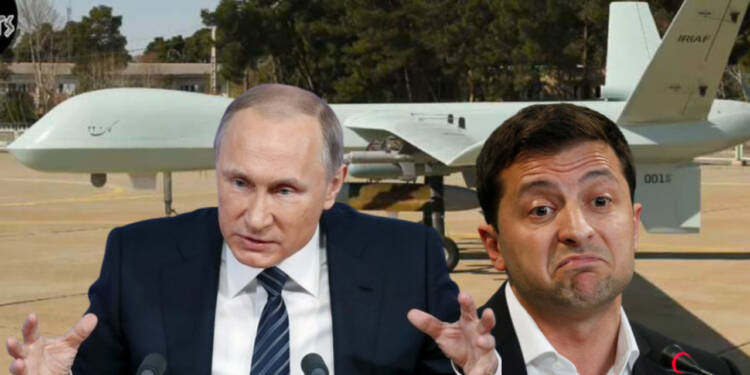 Ukrainian forces seem to be on cloud nine after the Russians reportedly retreated from many positions that they were previously holding. The western media is propagandizing the development as a triumph for Zelensky’s forces and also Turkey’s Bayraktar TB2 drones.

The Zelensky camp does not want the world populace to know that attacking and retreating is an efficient war strategy for obvious reasons. It was used extensively during the second world war by both the opposing parties. Nevertheless, the west would like to solidify the narrative that the Russians are done.

Moscow is reportedly gearing up for a significant offensive in some of the Ukrainian strongholds that would trigger the fall of the Zelensky regime. Putin has been playing the game on a lighter note since the operation began in February this year but it looks like the dynamics are now changing.

Naturally, the advent of advanced weaponry from the US to help Ukraine has indeed made things tricky for Moscow and that is exactly why Putin has designated an Iranian superweapon on the battlefield to destroy the US weaponry as he makes a move against the Ukrainian forces.

Ukraine claimed that Russia recently introduced Iranian drones and used them extensively for the first time since the onset of the conflict in late February. The Iranian Kamikaze drones, also known as ‘suicide drones’ have created new dangers and inflicted serious damage to the Ukrainian Armed Forces, the Wall  Street Journal (WSJ) reported.

Col. Kulagin, commander of the artillery of Ukraine’s 92nd Mechanized Brigade, stated that the Iranian drones have already destroyed two 152 mm and two 122 mm self-propelled howitzers and two BTR armored infantry vehicles, in the operational area of his brigade.

Iranian-made kamikaze drones are unmanned aircraft that don’t fire missiles but are missiles. They are capable of circling above a target and waiting for the perfect moment to strike with incredible precision.

These drones are reportedly inflicting extensive damage on Ukraine’s inventory. It looks like, lowering confidence in the Russian forces triggered by false western propaganda had possibly irked Putin who then eventually decided to unleash the drones.

The new Iranian drones pose a potential threat to Ukrainian command centers, artillery, air defense, logistics and other military targets, as well as critical infrastructure. Putin, being an experienced commander, has opted to approve additional expenditure in the form of drones to destroy critical infrastructure rather than risking his soldiers to carry out the task.

The advent of drones also marks an exciting development as the Ukrainian forces previously deployed the very infamous Turkish Bayraktar TB2 drones. However, the drones proved incapable in front of the Russian defense systems that eventually diminished the demand for the Turkish made drones.

On the other hand, the Iranian drones have turned out to be a dangerous weapon on the battlefield. This eventually makes things difficult for the West as it gives the Iranians major leverage over the global drone industry. Moreover, the Russians could now possibly back Tehran in legitimizing its nuclear program as a gesture of goodwill.

All things aside, as for now, Iran’s Kamikaze drones have taken over the battlefield and Putin seems to love it.