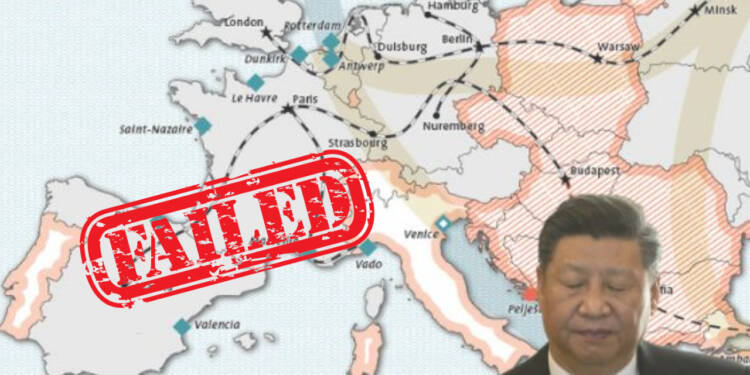 China’s Belt and Road Initiative (BRI), sometimes referred to as the New Silk Road, was one of the most ambitious infrastructure projects ever conceived by Beijing. Launched in 2013 by President Xi Jinping, China had aimed to stretch from East Asia to Europe, significantly expanding China’s economic and political influence.

However, Beijing’s attempt to take over the world with its ambitious initiative seems to be breathing its last and would succumb anytime soon. The Chinese President Xi Jinping has reportedly minimized the mentioning of its his favorite project in his speeches and we know exactly why.

BRI is dead as a dodo. Yes, you read that right. For the CCP, it is not important anymore. According to the Diplomat, the Belt and Road Initiative, often referred to as the “project of the century,” is gradually disappearing from Chinese leaders’ statements over ten years after it was first introduced.

Emerging economies seem to be struggling as a result of the pandemic, rising interest rates, and skyrocketing food and energy prices following Russia’s special operation in Ukraine. Now many of these nations are part of the Chinese BRI and are now struggling to make debt repayments. This brings about new problems for Beijing, which is likely to encounter more problematic loans.

Read More: “Not my concern anymore”, a dejected Jinping buries his child “BRI”

According to the International Monetary Fund,  the foreign reserves of said nations dropped by about 5% between December 2021 and June 2022 which is the largest half-year drop in about six years.

Xi invested in emerging nations in many parts of the world. A majority of these debts were extended to nations with stable financials and to those from which Beijing could extract strategic value in the future.

Understandably, China looked forward to controlling the local affairs of the invested nations as a consequence of their debts. However, cases of rebellions to the Chinese BRI in Africa and Latin America have been reported in the news in the past. Even if the Chinese fail to exert direct control, they still would have considerable influence owing to their substantial investments.

Although, the last pillar the Chinese were relying upon – the return on debt extended has now turned bad in a majority of these nations.

According to estimates from the U.S. think tank Rhodium Group, China is experiencing an increase in the cases of renegotiations for interest payment waivers and other loan conditions. It reportedly had 9 cases in 2019, but the number increased to 21 in 2020.

Such renegotiations included $52 billion in total for 2020 and 2021, which is more than triple the $16 billion for the two years prior as emerging economies were severely affected by the COVID-19 pandemic.

Read More: The new Kenyan President is set to snatch Mombasa and other dreams from Xi Jinping

So in conclusion, Beijing has eventually lost a lion’s share of its investment in foreign nations. China lost a substantial share of these investments in Pakistan and Sri Lanka as the two nations fell into a deep financial abyss in the past few months.

As a result, China is curtailing its expansive lending initiative. According to data from the World Bank, Beijing’s new loans to countries with lower middle incomes totaled just $13.9 billion in 2020, a 58% decline from the record high in 2018.

China would reportedly now be investing its surplus to focus on the domestic demand. Its plan to rise as a superpower has been quashed. You see, the Chinese real estate and banking sector is struggling, the economy is approaching stagflation and decreasing confidence. It is more than practical for the Chinese to let go of a project that they can not really support.