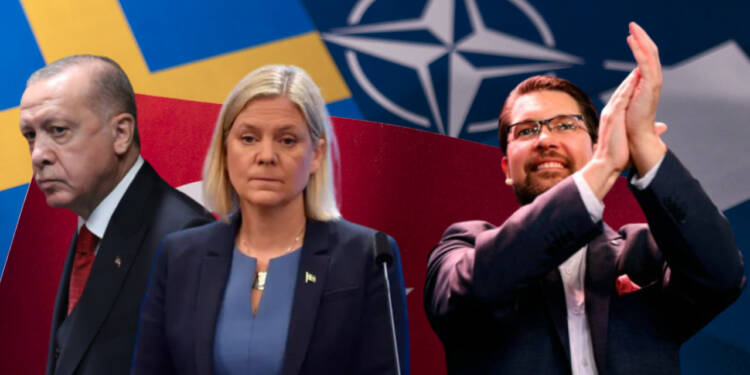 The Swedish people have declared their mandate and the victory of a Swedish right-wing government will be declared as soon as the coalition talks materialize. According to a count by the country’s elections authority, which covers 99.9% of voting offices, the four-party alliance have taken a lead over the left with 176 seats — 73 of them going to the right affiliated – Sweden Democrats (SD).

This election result represents a turning point in Sweden’s history, which will now begin its transition from being a bastion of tolerance to a conservative one. Additionally, Stockholm’s perspective on the EU, NATO and the so-called liberal ideals may also shift radically.

The Russian special operation in Ukraine seemed to have threatened the leaders in Sweden and Finland. It soon accelerated their bid to secure a possible accession to NATO.

However, the inclusion of a new member in the grouping requires the assent of all the members. That is where Turkey stepped in and blocked the accession of the Nordic nations into the alliance. Turkey refused to budge until the latter promised the extradition of 73 Kurdish separatist suspects from Sweden and 12 from Finland.

The former left-wing government in Sweden did accept the demands.  After which Erdogan decided to give formal recognition to the entry if the terms of the agreement were fulfilled. However, the presence of the Sweden Democrats, a right-wing party as one of the main coalition members in the upcoming Swedish Government complicates things.

The leader of the Sweden Democrats, Jimmie Åkesson, reportedly handed out leaflets in the Turkish town of Edirne, close to the borders with Greece and Bulgaria. The contents of the message highlight and confirm the anti-migration policy the new Swedish government is set to frame. The message said – “Sweden is full. Don’t come to us! We can’t give you more money or provide any housing.”

Erdogan is widely known to have orchestrated difficult circumstances for the migrants from the Middle East in Turkey, which forces them to look for safety in nations like Greece, Sweden and Finland.

Now, when the Swedish administration is set to alter its once lenient rules, this indeed becomes troubling for Turkey which is already under extreme inflammatory pressure owing to the war in Ukraine. Along with this, it would become difficult for Erdogan to promote a nationalist image among his country’s populace amid the upcoming election.

Erdogan’s hatred for the Swedish right wing is a well-known fact. Talking about the rise of the right-wing in Sweden, Erdogan said through a translator, “Here especially, Sweden has been a cradle for terrorism. And the terrorists have infiltrated all the way into their parliaments.”

Though it would be wrong to assume that the new Swedish administration would not want to extradite the Kurds. However, it seems like the Swedes’ hatred for the Turks will outrank their hatred for the Kurds, owing to many factors like Ankara’s migration policy and Turkey’s involvement in the Armenian genocide.

So now with the right wing in power, Sweden’s accession to the NATO alliance seems like a far-fetched dream. Moreover, it looks like the new Swedish administration would not continue with an anti-Russia stance similar to that of the previous government. It is a big possibility that Stockholm would rather opt out of the whole arrangement with NATO and even if it does not, Erdogan would refuse to ratify Sweden’s inclusion citing non-fulfilment of the agreement. In conclusion, the current developments would be the death of  NATO’s expansion dreams.