Former PM of Japan Shinzo Abe was an efficient statesman and a strong Japanese at heart who carried forward the legacy of his country and  its people. Abe , who was spine of his country, grabbed world’s attention when he showed his criticism for his country’s pacifist constitution 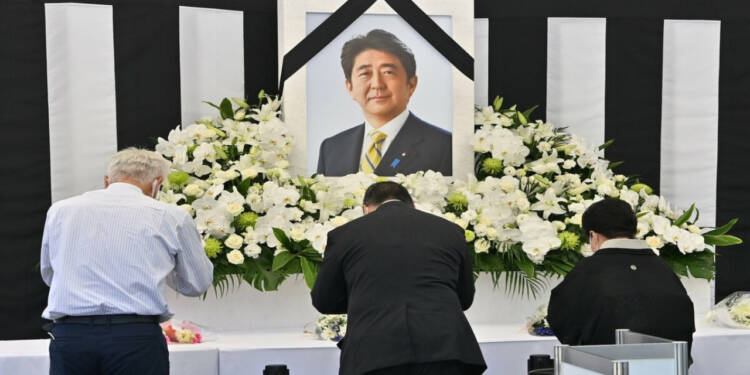 Having witnessed the horrors of two nuclear attacks, an exhausted Japan formulated a constitution that made it unlawful for Japan to raise its military, and Article 9 also capped the defense expenditure of the country at just 1% of GDP. Just two years after assuming the PM’s office, Abe went on to set in motion the most significant break from Article 9, to date. In 2014, Shinzo Abe reinterpreted Article 9. The move made the Japanese Self-Defense Forces more powerful and assertive, and that is exactly what made the G7 leaders hate Abe’s guts.

G7 Leaders – A shame to their countries.

In a shocking development, no Head of State of G-7 countries visited Japan for Shinzo Abe’s funeral. Japan is an integral part of the G7 grouping along with influential parties like Germany and the USA.

Read More: Kishida’s open defiance of “Abenomics” at the behest of invisible players

It would be wrong to assume that the G7 states have a troubling relationship with Japan. The USA-led grouping acclaimed Tokyo as an efficient counter to the growing influence of China in the region.

However, the current leaders in Washington and Europe were opposed to the foreign policy adopted by Shinzo Abe and that is why they shamelessly avoided attending the funeral, thereby disrespecting the people of Japan.

Joe Biden, the President of the US, dispatched his deputy Kamala Harris to the event and highlighted how little Japan meant to him, a message the Japanese leaders should and would keep in mind. Similarly, the Head of States of all the members of the G7 grouping failed to mark their presence. The Canadian PM Justin Trudeau on the other hand tried to play smart and canceled his plans to visit the funeral at the very last minute.

Abe – The man who helped the Japanese realize their True Potential

Shinzo Abe was a strong and unapologetic leader who believed in the bright future of Japan. Tokyo had a historic shift in foreign policy under his regime. Abe tried to normalize relations with Japan’s historic rival Russia and that is exactly what triggered Washington.

President Vladimir Putin and Prime Minister Shinzo Abe met at the end of 2018  to continue peace treaty talks between Russia and Japan, hence raising the prospects of ending the abnormal state of relations that has existed since the Soviet Union declared war on Japan in August 1945. Abe also endeavoured to engage with the Russians on the issue of the Southern Kurils Islands which in itself was a very historic development.

Abe believed in benefiting from closer ties between Moscow and Tokyo. Japan is dependent upon Washington for its defense and Russia could have become a balancing counter against American hegemony in the time of need.

The Shinzo Abe administration was also actively engaged in supporting the involvement of Japanese companies in the development of the Russian Far East. It was done to create a favourable environment for the resolution of the territorial issue and the conclusion of a peace treaty with Russia.

On the other hand, Abe fit in perfectly with the West’s agenda to curtail China. As a result, Abe could carry out his plans with minimum interference from the West. However, it seems like Washington thinks that Russia is a far bigger threat than China.

G7 leaders didn’t attend Abe’s state funeral just because he had closer ties with Russia and had an optimistic approach toward the future of both countries. G7 nations do not want to show their support for Abe’s attitude today because of the ongoing Russia-Ukraine conflict and their support for Ukraine.

But, you see, Beijing is within US bounds only until it develops enough capabilities to take on Taiwan. Many leaders of the G7 grouping like the US, Germany, Italy and France are part of the influential bloc within NATO and they are reportedly getting into bed with China.

Chinese State Councilor and Foreign Minister Wang Yi recently met with NATO Secretary General Jens Stoltenberg on the sidelines of the 77th session of the UN General Assembly. Stoltenberg said that China plays an important role in global issues with its growing economy and influence.

On the issue of peace and security, he said, China is a major country with the best record. China has no genes for external expansion, and has never invaded other countries, engaged in proxy war, sought spheres of influence, exported ideology, interfered in other countries internal affairs, or participated in military blocs.

Not influencing the internal affairs of any country? China has done nothing but only tried to influence the politics of foreign states by extending foreign loans through its BRI.

NATO’s alienation of Japan by mingling with the Chinese is in itself a disrespect towards the late Shinzo Abe and the people of Japan. If Abe had left something to improve Japan- Russia relations, this move of NATO will fill that gap, as it will bring Japan closer to Russia now that it has realized that Washington could not be trusted.