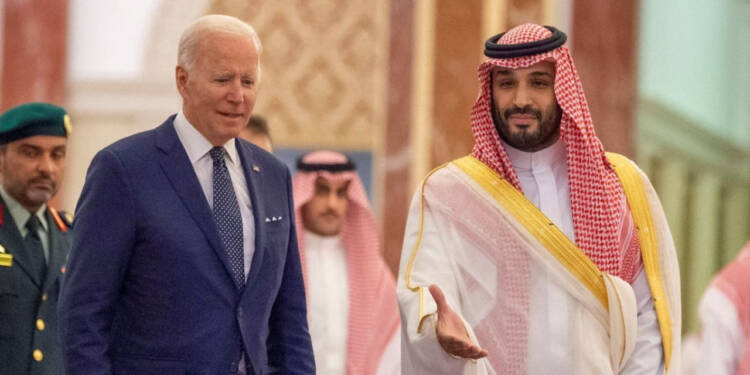 The Biden administration seems to believe that the world runs as Washington pleases. The US was undoubtedly a hegemony capable of directing anything it preferred but the global dynamics have changed. The rise of the eastern bloc in the past decade has provided the middle east with a viable defense. The rising nations of the region like Saudi Arabia can now rely on superpowers like India, China and Russia to shield them from becoming Iraq 2.0.

US President Joe Biden had long wanted to solidify his hold on the leadership of America and now that he has, he knows it would be his one and only term and not just because of his age but because he is very disliked. He is the President who orchestrated a recession in the US’ and is responsible for the US’ nullified hegemony over the world order. As a result, Biden is now desperate, more than ever to become the President who defeated Russia in war, direct or indirect and that is exactly why he forced Ukraine into the war. His ambitions have cost the American and European populace greatly due to the high gas prices of quashed supplies from Russia. This has made sustainable manufacturing a thing of the past mainly in Europe.

Biden reportedly affirmed his European allies to back him in the war and that he would surely find an answer to their gas-related anxieties. However, he failed badly to scout alternate sources of gas for the Europeans. He tried to reason with Mohammed bin Salman, the Prince of Saudi Arabia in July to ramp up the supply of oil to tone down the prices but the Prince only increased production to such minuscule levels that it was rather taken as an insult to Biden.

Why would the Saudi Prince ditch the Americans for the Russians?

Saudi Arabia, if not an ally of Washington, has long offered cooperation to the US in terms of oil supply. However, things seem to have changed ever since the oncoming of Biden as the President. Saudi Arabia, along with Russia, UAE and others rallied the OPEC+ nations to tone down the production, which ramped up oil prices all over the world. In the US, with the midterms around the corner, the price of oil has spiked to more than $100/ barrel. This sharp increase would surely trigger anger among common Americans which would make things much more gloomy for Biden in the midterms.

As a result, lawmakers in the US are reportedly announced to roll out bills that would direct a pull out of US forces from Saudi Arabia and UAE. However, the Prince does not seem to worry about it owing to his newfound friendship with the Russians. The US forces could easily be replaced with Russian forces.

However, there is no doubt in the statement that the US is still a financial superpower than why the Prince is insisting to stay put with the Russians. You see, the Prince seems to have little problem with Washington. Although he has a thing or two against Biden. Mohammed bin Salman is a unique leader, a sought of which Saudi Arabia has never seen. He understood this long ago that the oil income would soon dry up and the country would have to offer more. As a result, the Prince took on a reform spree to reverse radicalize his nation.

He brought in reforms to improve the conditions of women and invested heavily in projects that would attract foreign businesses and tourism in the country. Although his reform spree took a hit after the murder of the Saudi based journalist Jamal Khashoggi in 2018.

Read More: MBS created a plan to take down Biden, and it has worked like a charm

The Prince was blamed for the murder because the Journalist was a staunch critic of the Saudi Kingdom. The highlight of the event was that the Democrats headed by Biden, although they were not in power at the time, created circumstances that reaffirmed an image that the Prince was indeed responsible for the murder. The event triggered a loss of confidence in foreign investors in Saudi Arabia, something the Kingdom is yet to recover from.

You see, there is no way the US could reaffirm relations with the Democrats in power. However, the return of the Republicans headed by Trump could be a game changer in American foreign policy.