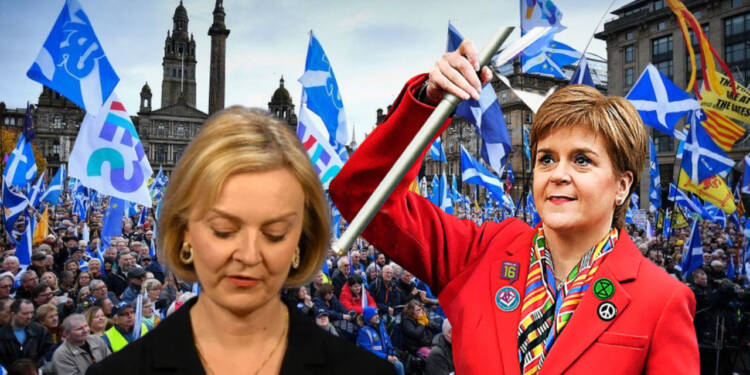 UK Economy: The United Kingdom is sitting on a rocky chair. Since 1990, the economic growth of the United Kingdom has remained stagnant. Global economic growth has seen major roadblocks as the world suffered 2 major disasters back-to-back. However, the UK has suffered three major setbacks in the last two years and the consequences of these setbacks can be seen in the tumbling economic growth along with various other issues including the growing unemployment rate and increasing cost of living.

The Brexit, along with the Covid-19 pandemic, exacerbated by the Russo-Ukraine crisis has almost made it certain that the UK economy would remain in tatters for a long haul. The UK was already dealing with global inflation and stagnant wages when the Covid-19 pandemic arrived.

The country, which formerly had a variety of fantastic economic opportunities, now seems to have a gloomy future. As a result, it appears that something terrible is about to happen. Coming to the point, Scotland’s desire to leave the UK might have just got new wings and what this means is Kingdom might fall.

Scotland has been eyeing to leave the United Kingdom for the last few years. However, since 2020, the movement has gained a lot of momentum in the recent times. The ruling Scottish National Party has renewed its calls for secession and is looking for a fresh referendum in the next year.

In the midst, the Scottish First minister has expressed her desire to rejoin the European Union. According to BBC, Scottish First Minister Nicola Sturgeon has announced that Independent Scotland would apply to rejoin European Union. Reportedly, while unveiling a 108-page plan on independence and the economy, Sturgeon has stressed that, if a second referendum takes place and it was won by the yes campaign, Scotland would unquestionably aspire to eventually set up its currency and join the EU.

The First Minister Nicola Sturgeon has stressed that Scotland could no longer “afford to live under Westminster control”. According to her, “Scotland would try to follow the EU’s growth and stability pact’s principles. That sets debt targets for the EU but is being reformed to cope with the economic impacts of the global disruption from Covid, the Ukraine war, and inflation.”

When Scotland’s 32 local authority areas voted in the 2016 referendum, 62% of them opted to remain part of the EU, while 38% did not. The Scottish independence vote, however, contrasted with a decision to leave the UK by a margin of 52% to 48%. At that time, the situations were completely different. Still, the first minister had pitched that it’s certainly clear that people in Scotland see their future as part of the European Union. Now, the situation is becoming a whole new ball game.

Speaking ahead of the new paper’s publication, Ms. Sturgeon said: “In 2014 we were promised stability if we voted no to independence – instead we got austerity and Brexit, and are now being taken on a libertarian joy-ride.” Scottish authorities are eyeing re-joining the EU as it would enable free travel across the UK and 27 member states and make it easier to attract workers to sectors that have been hard hit by Brexit.

These intentions have reportedly made the UK authorities cold-sweat. A UK government spokesperson rebuked the Scottish first minister’s statements and stressed: “People in Scotland want their governments to focus on the issues that matter to them. They demand – economic prosperity, ensuring our energy security, tackling the cost of living and supporting our friends in Ukraine has never been on their agenda”

He furthermore added, “This is simply not the time to be talking about another independence referendum.”  UK authorities are not in the mood to allow Scottish independence at any cost. However, given the state of the UK’s economy, it would be a nice move by Edinburgh to leave the Kingdom.

The aftermath of BREXIT has severely hurt the already fragile economy of UK. Along with GDP growth that is lagging and inflation that is skyrocketing, EU has restricted free trade and people movements with the U.K., which eventually became a headache for Scottish citizens of the United Kingdom too.

Scottish political parties have fiercely opposed these restrictions and have placed the whole burden on London’s government citing that their decision to leave the EU was a grave mistake.

Scotland’s economy was strong, including sectors like energy, financial services, and tourism. It had a thriving university system, abundant natural resources, and reliable institutions, but now, the world is losing its confidence in Edinburgh as well due to its allegiance with the UK.

Read More: Forget Scotland, the UK might end up losing Northern Ireland too

Hence, the Scottish government is trying to break new ground. Edinburgh has made it clear that after achieving independence from the United Kingdom, it will join the EU. But London would completely crumble if this happens.

More calls for secession would start to surface, and the economy that is currently staying afloat at the behest of member states would also perish. This is the time when London needs to turn over a new leaf for Edinburgh.

Making Russia an Enemy to please citizens: Yair Lapid is a great fool