With India’s generous help, Morocco will be providing “green energy” to Europe 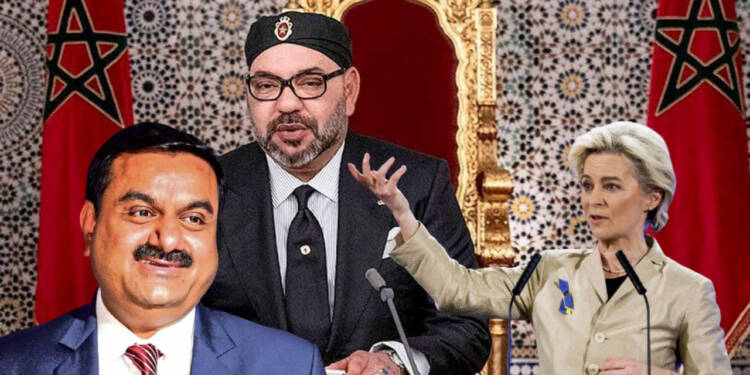 Indian business tycoon Gautam Adani is holding talks with the Moroccan government to develop its renewable energy projects which will be used to supply electricity and hydrogen to Europe. As per Bloomberg, Adani discussed 10 gigawatts solar and wind projects which would be his largest clean energy initiative outside of India. BloombergNEF uncovered that the businessman intends to create green hydrogen with the locally generated solar and wind power. It is estimated that the generated power capacity would be equivalent to Morocco’s existing electricity capacity.

Bloomberg further added that Adani is also planning to supply hydrogen to the state-owned fertilizer group OCP Group for the production of green ammonia. When it comes to renewable energy, India is taking an active role in promoting it. The Indian government under Prime Minister Modi has taken bold steps which are intended for a future without too much reliance on fossil fuels.

According to a report by the Institute for Energy Economics and Financial Analysis, investment in renewable energy rose to a record high in fiscal year 2021-22. In fact, about 14.5 billion USD was invested in renewable energy, which is up by 125% relative to last financial year and 27% higher than in 2019-2020.

It is true that crude oil and natural gas are indispensable for the survival of people but it is also true that their consumption is having adverse consequences on the environment. Keeping this in mind, India is responding to this crisis. India is also helping countries like Morocco with clean energy projects. Now, if the deal between Adani and the Moroccan government goes as planned, then Morocco will be able to generate electricity and supply it to Europe.

Currently in Europe, following Russia’s military operation in Ukraine and ensuing sanctions by the West, there is skyrocketing inflation and a severe shortage of oil and gas. Putin cut the EU’s supply after numerous failed attempts by the West to economically isolate Russia. That resulted in European leaders looking for alternative energy sources, in fact recently Macron rushed to Algeria for gas.

Hence, Morocco can gain from this situation by selling its electricity and green hydrogen to Europe at hiked prices. Morocco’s economy will progress, it will become self-sufficient and will consolidate its position in the decade-long conflict with Algeria.

When it comes to green energy, Morocco is developing its projects. Its Minister of Energy Transition and Sustainable Development stated that Morocco started building renewable infrastructure more than a decade ago which has led to the creation of sixty projects that attracted USD 5 billion in investment. In fact, its Noor Ouarzazate Solar Complex is the largest solar power plant in the world which has a total capacity of 580 MW.

In view of this, with the success of Adani’s project, Morocco will start supplying electricity to Europe and in return will receive its backing on the international stage over its territorial integrity. Morocco’s conflict with Algeria over the Western Sahara region has led to massive loss of lives and carnage, the Polisario Front which is backed and financed by Algeria has obstructed every rational endeavor by Morocco for the peaceful solution of the war.

Morocco’s fifteen-year-old autonomy plan has received widespread support globally. It is based on giving autonomy to Western Shara on legislative, judicial and administrative matters. But Algeria is opposed to it.

Hence, with a strong economy, Morocco will bolster its military power and diplomatic ties which will further its claim over the Western Sahara region. Morocco will be able to strengthen its hold over the disputed region, which is troubled by a separatist movement. Also, it will be able to annihilate terror groups which are fighting a war for the self-determination of Sahara.

India is assisting Morocco in the battle against the vicious attacks on its sovereignty. Adani’s plan to develop green energy projects in Morocco will inspire other African countries to adopt a similar path in their journey for development of the economy.