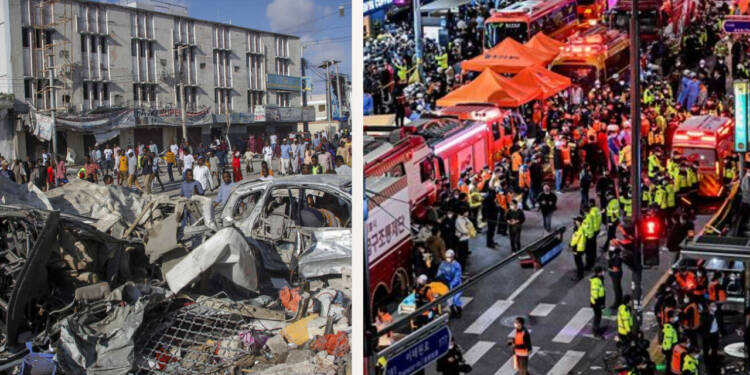 Seoul Halloween tragedy: Scenes of mayhem and panic unfolded in the South Korean capital Seoul, on Saturday when a massive rush broke out during the city’s first Halloween celebration in three years. Till now it is reported that 151 people are dead and several others are injured. The event happened in Seoul’s Itaewon region when people in a popular nightlife area while wearing masks and Halloween costumes rushed into a narrow alley in a stampede.

Seoul Halloween tragedy is South Korea’s worst disaster in years when an estimated 100,000 people had congregated for the celebrations and as many as 150 people were hurt. Most of the victims, according to local news outlet Yonhap news agency, are in their 20s, and officials worry that the number may increase. According to South Korea’s fire agency, there were at least 19 foreigners among the dead.

In another gore incident, twin car bombings happened at a busy junction in the Mogadishu capital region of Somalia and killed at least 300 people. The death toll could be even larger as there was a similar incident at the same spot 5 years ago which claimed the lives of more than 500 people. It is believed that the bombings were targeted towards the building of the education ministry.

At the scene of the blasts in Mogadishu, President Hassan Sheikh Mohamud informed reporters that almost 300 additional people had been hurt.

“We ask our international partners and Muslims around the world to send their medical doctors here since we can’t send all the victims outside the country for treatment,” he said.

The terrorist group al-Shabab, which has ties to al Qaeda and frequently attacks the capital and governs vast portions of the nation, claimed responsibility and stated that it was the ministry of education that it had targeted. It stated that the ministry was an “enemy base” that was “dedicated to pulling Somali children from the Islamic faith” and that it was supported by non-Muslim nations.

After the Seoul Halloween tragedy claimed the lives of at least 150 people, world leaders have conveyed their sorrow and condolences.

A tragedy that happened in Somalia on the same day as South Korea’s deadliest disaster in years was not shared by world leaders, who instead extended South Korea their condolences.

The families of the deceased in South Korea have received a “deepest condolence” message from US President Joe Biden and First Lady Jill Biden.

“All our thoughts are with those currently responding and all South Koreans at this very distressing time,” Sunak wrote.

All our thoughts are with those currently responding and all South Koreans at this very distressing time.

His Twitter timeline and James Cleverly, his foreign secretary, were both silent on the tragedies occurring in Somalia.

On behalf of Canadians, I’m sending my deepest condolences to the people of South Korea today, following a deadly stampede in Seoul. I’m thinking of everyone affected by this tragedy, and wishing a fast and full recovery to those who were injured.

Japanese Prime Minister Fumio Kishida said in a tweet that he was “hugely shocked and deeply saddened by the extremely tragic accident in Itaewon, Seoul, that took many precious lives, including those of young people with their future ahead of them.”

Italy made no public expressions of sympathy to Mogadishu but expressed shock at the Seoul Halloween tragedy.

Italy’s foreign minister Antonio Tajani tweeted, “Deeply saddened by the tragedy that happened in #Seoul. Painful and shocking images. I express Italy’s condolences to the families of those who lost their lives and the deepest sympathy to South Korean people,”

President Emmanuel Macron tweeted in both languages, Korean and French.

“France is with you,” he said.

According to a statement by the Chinese Foreign Ministry, even Chinese President Xi Jinping sent condolences to South Korean President Yoon Suk Yeol.

The above info is not real-time as this article was written on 31st October and the above info can change afterwards.

Read more: Why does every African nation need to immediately throw Amnesty International out?

But none of these leaders thought that they should send the same condolences to the people of Mogadishu. Does dying in a poor country matter less? Looks like these leaders think the same. In this selfish world, there’s nothing like sentiments and emotions but everything that matters is interests and their fulfilment.