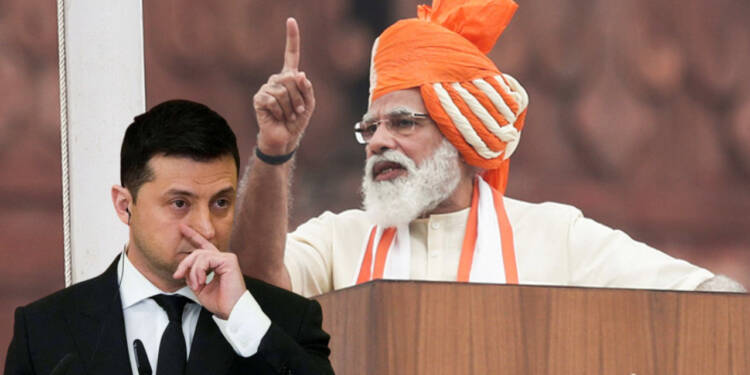 If one remembers, back in June, the NATO chief stated that Kyiv will have to make some territorial concessions to Moscow. Yet, Ukrainian President Volodymyr Zelensky was not ready to back off from his deadlock with Russian President Vladimir Putin over the war in Ukraine.

Zelensky has always emphasized that Ukraine will not conduct any negotiations with the current President of the Russian Federation, yet, commenting that his country is committed to a peaceful settlement through dialogue. But the situation in Ukraine radically shifted in just eight months. The country is in upheaval, and Russia has cut a sizable portion of Ukraine. All of this could have been averted if Zelensky had listened to the advice of India, Russia’s alleged ‘Best Friend,’ with full devotion.

It is not hidden from anybody that India has always taken a neutral foreign policy and kept relations with both the west and Russia. Yet, the global media has never failed to castigate India’s relations with Russia.

The western media was in the air when Indian PM Narendra Modi advised Vladimir Putin to look for peace in Ukraine. However, the very same media purposely failed to report a similar call between Modi and Zelensky. Back in early October, Modi had advised President Volodymyr Zelensky that there can be no military solution to the war in Ukraine, and India is ready to contribute to any peace efforts.

Modi had reiterated his call for an immediate end to hostilities and a return to the road of diplomacy and negotiation during his phone call with Zelensky. After telling Russian President Vladimir Putin that “today’s era is not for a war,” Modi made similar comments to Ukraine.

However, Zelensky as usual behaving like a spoiled kid of the US turned down Modi’s request. Zelensky rebuked Modi’s statements stressing that Kyiv will not conduct any negotiations with Russian President Vladimir Putin. He may consider peace talks with a new Russian President, but, this itself means it is clearly impossible.

The day of reckoning has arrived

What happened afterward is known to everybody. Ukraine and US, as usual, attempted everything in their book to provoke Russia. Firstly, Kyiv officials got overwhelmed with Nord Stream sabotage, then Ukraine somehow admitted that Ukraine has a say in the Kerch bridge explosion.

These nefarious attempts left Moscow in a huff, and days later, Russia’s multiple strikes left many parts of Ukraine sunk into the darkness with devastating energy infrastructure. Russia targeted power stations in many cities in Ukraine. Due to continuous air strikes from Russia, people had to face power cuts in parts of Kyiv, the Zhytomyr region situated in the west of the capital, and Dnipro. The situation in the capital Kyiv has deteriorated to such an extent that Kyiv’s mayor had to ask residents to leave the city.

Kyiv’s three million residents were advised to make arrangements to stay with friends or relatives who live in the suburbs who still have water and power so that they have a plan in the “worst case” scenario.

A re-attempt to put everything back in place

The US officials were also surprised to see Russia unleashing all hell on Ukraine. Recently, the US has also started to change its mind about taking action to support Ukraine. The Washinton Post has reported that The Biden administration has privately ordered Ukraine to signal a willingness to hold talks with Russia. This is exactly what Indian PM had stressed a month ago. To have peace talks with Russia, yet, Ukraine didn’t back off from its non-sensical deadlock against Russia.

Putin has time and again called for negotiations in the initial days of the war but Zelenky again blocked the proposals so as to solidify his legacy as the President who defeated Russia. French President Macron and German Chancellor Olaf Scholz also got around to calling for peace. But, Zelensky was clearly not the sharpest tool in the shed.

Therefore, Ukraine paid a high price for rejecting Modi’s advice. Winter is now at the doorstep of the nation, and the Kyiv is in ruins. India’s proposal on peace initiatives would have undoubtedly been helpful to the Ukrainian leader, and the country would have been in a better position as a result. There wouldn’t have been a significant airstrike, and perhaps the two countries would have reached a consensus and the war would have been on a halt. Sadly, Zelensky loves to fiddle while Ukraine burns.

The identity crisis of the Caribbean that nobody talks about