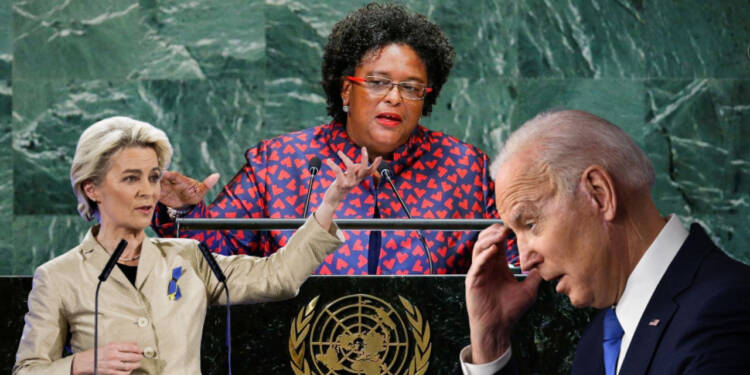 The ongoing Egypt COP-27 Summit has created a stir among developing countries that are aspiring to get their voices and demands heard. Here, the reference is being made to Barbados PM Mia Mottley’s lashings on the West for ignoring the Caribbean region’s growing importance in the international arena along with its climate issues. Mia Mottley has criticised industrialised nations for failing the developing world on the climate crisis, in a blistering attack at the Cop27 UN climate talks

In the midst of the Climatic talks, PM Motley has blamed industrialised countries for scapegoating the poor for their prosperity and high carbon emission. Even now, poor and developing countries are under pressure to pay up for mistakes which they didn’t commit.

With occurrence of Hurricanes, floods and multiple natural disasters, smaller countries are stuck between a rock and a hard place when it comes to their poor infrastructure, and unstable governments. PM Mottley’s oratory skills in her open speech have won her support from multiple UN diplomats including the top one-Antonio Guterres.

PM Mottley exposed the West’s partiality in groupings such as the G7 and G-20 where African and Caribbean countries aren’t represented at all in the functioning and policy making. She also went back to the past about the third-world countries working hard during the Industrial Revolution where the fruits went to the West only due to their colonial adventures. She went on to say that for the infrastructure development of developing countries, and the adoption of green energy, loans, and financial grants should be given to them in times of need.

The poor countries deserved assistance and support in order to grow and focus on mitigating the effects of climatic change. Still, all promises seem to be shattered vis-à-vis extensive talks being made by the Western countries in name of green energy and combating climate change.

She even warned of catastrophic events pertaining to the refugee crisis, where an increase in figures from 21 million to 1 billion refugees was given by her during her speech. Also, UN Chief Antonio Guterres reiterated about the two worlds to cooperate and come up with pacts which would be useful in creating a green world, aiming to ensure zero-emission instead of being involved in a tug of war.

This isn’t the first time PM Motley has flagged this issue on the global stage. She initially explained the same at the UN General Assembly in September, where she asked the advanced countries in helping to mitigate threats coming from pandemics. Moreover, she also asked for the access to global financial institutions and resources. Further, she even questioned the role of members of the Security Council being under the influence of only a few competing ‘superpowers’.

She previously has also argued that Germany was illegitimately allowed to cap its debt payments at the equivalent of 5 per cent of its exports, under the premise that the “cataclysm” experience of a war would not allow it to finance reconstruction while repaying debts incurred during the war. But the Caribbean had nothing to do with the war and they must have been paid the amount without any delay.

What could be Coming for an Uncertain World?

Speech of Mia Mottley should be seen as an eye-opener for developed countries to collaborate and engage in ensuring a green world where transparency and free access to resources are prevalent and the slogan of leaving no one behind is practised seriously by the West.

Read More: An anti-West revolution has started in Haiti as people rise in arms against “foreign invaders”

Outrages of Mia Mottley at these carefully planned ‘Green’ conferences have exposed the hypocrisy of the whole West. She pointed out how the ego war of the West in Ukraine is creating ruckus in the Caribbean nations that have nothing to do with the war.

Mia Mottley has shown mirrors to the West. She’s outrightly telling them to practise what they preach. The growing concerns of the West regarding the climate are only growing thorns in the way of these underdeveloped countries while the West just keeps enjoying the fruits of their natural resources and cheap labour.