Barbados shifts gear to take on the US-backed Big Pharma

US through the United States Agency for International Development (USAID) exerts its influence in the region. But, no more! 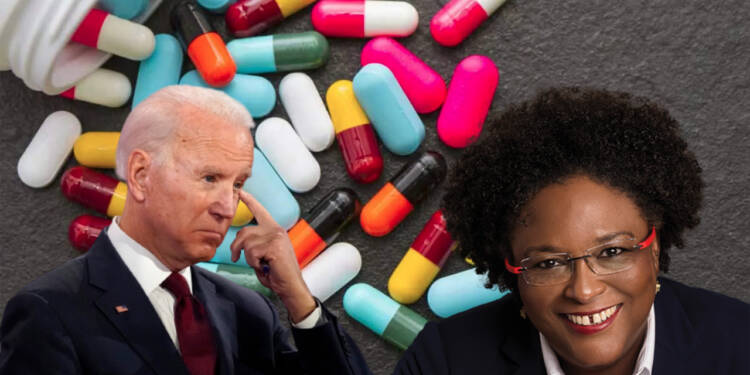 Barbados has taken the first steps to revolutionize its pharma sector. Recently, Prime Minister of Barbados Mia Mottley, President of Guyana Irfaan Ali and the President of Rwanda Paul Kagame met at the sidelines of the COP27 in Egypt to discuss the furthering of pharmaceutical equity for global public health.

According to Newsroom, the key recommendation from the meeting is an inter-governmental South-South cooperation initiative which aims at the development and manufacturing of 60% of all essential, contemporary pharmaceuticals for the populations of Latin America, the Caribbean, and Africa within their respective continents by 2040.

This is a groundbreaking initiative that will finally set the wheels in motion for self-sufficiency in pharmaceutical manufacturing in the Caribbean region and will eventually shrink the influence of foreign nations in the sector.

As the 27the annual UN meeting on climate, COP27 is currently taking place in the Egyptian coastal city of Sharm-El-Sheikh, a major South-South initiative has also been announced on the sidelines of the COP27 summit. Countries like Barbados, Guyana are to be a part of a pharmaceuticals manufacturing deal among other countries of the Caribbean, Latin America and Africa.

Initially, the cooperation will focus on next-generation oncological drugs, preventive and therapeutic vaccines, as well as modalities for women’s health. It is also stipulated that all manufacturing sites related to this endeavour will be in full compliance with the relevant stipulations of the COP21 Paris Agreement. Further, the leaders of the countries and organizations which have launched this initiative have emphasized that all interested countries in the Caribbean, Latin America and African region are invited to join.

The Prime Minister of Barbados Mia Mottley said, “Today is a truly historic moment as with a great sense of urgency and understanding, South-South Cooperation rose to the fore to address matters of global public health”.

The initiative has also been commended as it would provide the opportunity for the peoples of Africa, Latin America and the Caribbean to have access to pharmaceuticals developed within their own regions.

Crippling Dependence on Europe and US

Similar is the case with other Caribbean nations as well. Also, the US through the United States Agency for International Development (USAID) exerts its influence in the region. The funds and latest types of equipment US provides these poor nations through this agency are then get used in exploiting their regional infrastructure and even, weakening their control over their internal matters.

For instance, recently the Jamaican government has announced ‘Health Connect Jamaica’ which will allow Jamaican living with HIV/AIDS to access clinicians, laboratories and pharmacies within the “private sector”. It seems like a genuine attempt towards helping people. But, there is a catch in it. Well, the project will also receive funds from USAID. And under this project, the public hospitals are not been upgraded but only the private clinics/hospitals are given the priority.

No doubt the infrastructure of the country will be uplifted but at what cost? The people have to pay hefty prices to bear the cost of the upgraded treatment.

So, the recent move of Barbados towards becoming self-sufficient means a lot for Caribbean nations. It is not only expected to boost the region’s capacity to produce vaccines and medicines but will also make their health system resilient and contribute to economic growth while reducing dependence on countries like US for pharmaceutical products.

This is a win-win for Barbados as now it can improve its healthcare system and also can keep in check its overdependence on imports from China, US or Europe. The Caribbean region is strategically important for both US and China. If Barbados can lead this transformation and become self-reliant in pharmaceutical manufacturing, it will no longer be dependent on the major pharma producers and this will be a big jolt to any US & China’s intention of exerting influence on the internal affairs of the Caribbean.