85 per cent of the homicides occurring in Jamaica is through firearms only. Jamaica is one of the three countries in the Caribbean that are witnessing surges in murders 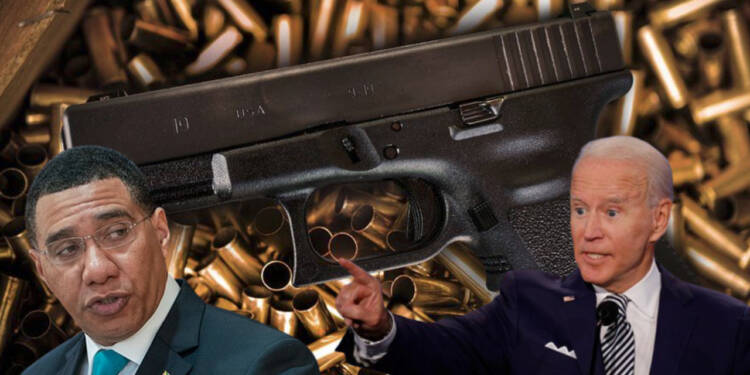 Jamaica, one of America’s closest allies is on the way to becoming a Gun Paradise. Illegal smuggling of guns is skyrocketing there day by day. The country is aspiring to put restrictions on gun trade through passing laws, which seem to be delayed. The situation is so alarming that murders are going up by 8 per cent in Jamaica.

85 per cent of the homicides occurring in Jamaica is through firearms only. Jamaica is one of the three countries in the Caribbean that are witnessing surges in murders. Crimes will be a bad impression on a country where tourism is its bread and butter.

US, even though, has developed some bonding with Jamaica, hasn’t done much in tackling the local problems pertaining to high murder rates and gun sales.  The question which comes here is how has the US helped in creating these problems and what is it gaining from it.

Washington and Kingston developed relations way back in 1962. Relations were only about giving and taking, which is only about appeasing the global powers. And, the US is only looking at its selfish interests and is reluctant to look into the country’s true challenges. It only aspires to showcase its strength, and hegemony to survive.

Aid and Assistance are the only incentives for Kingston because it needs finance for development and growth and for that it is dependent on foreign aid. But its dependence becomes a source of its vulnerability towards US and which causes its internal challenges.

ow, Jamaica is getting a bad name because of a rise in murders and a 51.3 per cent conviction rate due to people loosely using weapons. Recently looking at the developments, and damage control measures, initiatives have been in the news. First, The House of Representatives passed a gun amnesty which will make the arms go towards the state without any persecution or fear being instilled in the mind of gullible citizens. If citizens or criminals cross the line, then as per the 2022 Act, life imprisonment will be provided to the accused.

Other initiatives are being put in place to prevent any outside interference, such as the Tell Us Movement, launched by Jamaica Customs which has the aim of ensuring further collaboration between the society and the state and creating awareness through a reward mechanism being used to make people aware about the consequences that the crimes have. Collaborating with the customers would make it easier in dealing with such smuggling happening through ports.

Amnesties were adopted by people to kick aside arms and give them up. Even though UNDP is trying to work on initiatives the other problem here is that the West are funders and the agents. Now, these past actions could be a lesson for Kingston to act and implement laws properly.

Time For Kingston To Pull Up Its Socks

The Tell Us initiative is essential in restricting rapid gun sales so the youth doesn’t indulge freely and also radicals will not get access to weapons and promote cross-border terrorism.

In order to tackle the crisis, the government should ensure proper fencing of boundaries which are becoming a den for illegal arms and drug smuggling, and make laws stringent to prevent foreign hanky panky. Education and awareness are keys to citizens understanding the legal systems and laws before any rash or unethical action is taken.

If the illegal gun sale is not worked on with commitment and steadiness, then, the once tourist paradise may become a graveyard. Now it depends on Washington, what it wants to take from such initiatives and does it need to keep on bossing around its allies? No, because every country needs to have a clear voice and its own laws which should be free of any whims or fancies.