Xi all set to nationalize every Chinese business 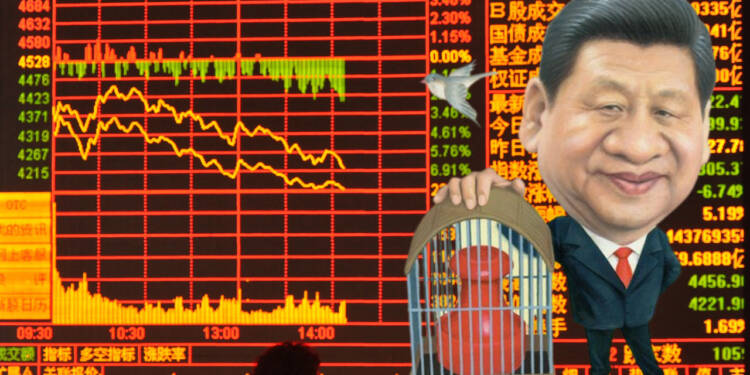 Xi 3.0 so far has been a disaster for the Chinese economy. Not only it has triggered a massive exodus of country’s wealth to Southeast Asian nations, Xi’s re-election has also caused a bloodbath in the Chinese stock market.

And now, Xi is very very very desperate! There is a whole slew of media reports that now claim that Chinese economy is seemingly back on track.

Chinese stock market on Tuesday experienced an impressive rebound, driving Hang Seng China Enterprises Index up by 5%. Experts say that the Biden-Xi meeting that took place on the side-lines of the G20 summit in Indonesia played a key role in calming the fears of investors and businesses.

As it appears, US President Joe Biden’s meeting with CCP secretary Xi Jinping came as a blessing in disguise for the Chinese stock markets. Another important factor behind the Chinese stock rally were the rumours of a governmental stimulus package. As per investing.com, the Chinese government is expected to take stimulus measures to counter the economic duress from COVID-19 restrictions.

But that does not mean everything is good with the Chinese economy, as being portrayed by many in the media industry.

Another grim outlook for the Chinese economy is indicated by the fleeing wealthy businessmen and billionaires. Media reports show wealthy Chinese are fleeing to foreign destinations, including Singapore and Indonesia, to escape increased scrutiny at home.

Xi 3.0: A disaster for the Chinese economy

The exodus has accelerated after Xi Jinping cemented his rule over the nation for an unprecedented third term. Xi Jinping’s “common prosperity” ambition is the most concerning issue for the Chinese billionaires.

Drew Thompson, a visiting senior research fellow at National University of Singapore’s Lee Kuan Yew School of Public Policy, said, “It’s really a downward slope for the private sector in China and it’s just a question of how steep.” He added, “That will accelerate efforts to migrate and shelter wealth abroad.”

It’s obvious that Xi Jinping’s love for people despising the private sector is orchestrating this exodus of China’s wealthy people. Vikna Rajah, head of tax and trust at law firm Rajah and Tann Singapore LLP, said that “Entrepreneurs who have done well and taken their companies public are interested in parking their international wealth in a place like Singapore.”

Xi to nationalize all businesses?

The trend shows that to achieve his goals of “common prosperity”, Xi Jinping can nationalize all of the assets of Chinese businesses. Chinese billionaires have long reaped the benefits of “Capitalism with Chinese characteristics”. Now, they view China as a communist entity that can strip them of all of their riches in the drop of a hat. This explains the massive outflow of money from China, and the desperation of the Chinese leader.

Xi Jinping understands that the exodus of the wealthy Chinese can well stymie his efforts of “common prosperity.” So, he is now taking measures to stop them from flying abroad, and siege their assets.

Xi scrambles to stop the exodus

The Xi administration has reportedly launched a special tax investigation team to keep tabs on individuals with bank deposits of more than $1.4 million. Under new rules, if any person put under observation by Chinese authorities want to fly out of China, he/she must obtain a Tax Refund Certificate. These measures are inspired from the moves taken by Mao Zedong, which the former Chinese leader took in order to promote nationalization. Experts quoted by theBl.com said that this was the first step towards complete nationalization of Chinese businesses.

The report reads, “We can see that Xi Jinping has once again successfully implemented the Mao Zedong-styled dictatorship and forced a group of high-income people to hand over the wealth they had earned during 30 years of reform and opening up.”

Such developments show the Chinese economy and domestic politics are far from being stable. Unemployment rate is skyrocketing, economic growth has stagnated, and investors are fleeing China like there is no tomorrow. Xi 3.0 has only changed China for worse, and there’s no indication that the best days for the Chinese economy lie in the future. Now, Xi’s scramble for stopping Chinese nationals from flying abroad and seizing their assets only shows his anxiety and desperation.