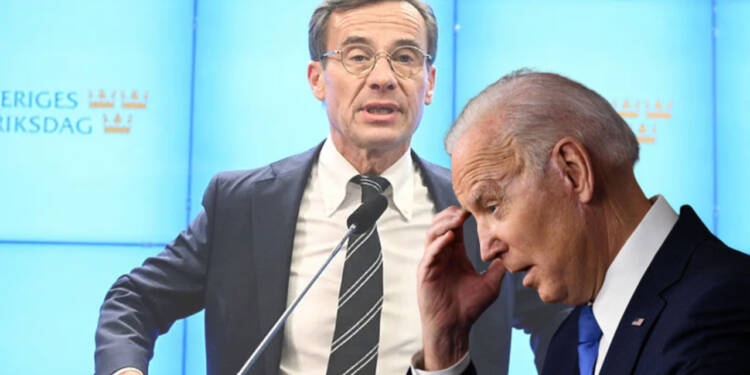 The Nord Stream sabotage has been the most noteworthy moment to happen after the Ukraine war this year. Countries initially blamed Russia for vandalizing the Nord stream pipelines but as the evidences are coming out, the attitude of European leaders seems to be changing.

Sweden has become the first European country to blame Biden for sabotaging the pipeline. Swedish officials acknowledged on Friday that the mysterious blasts in September that rendered the largest-capacity natural gas pipelines from Russia to Europe unusable were the result of “gross sabotage,” saying that explosive traces had been discovered as part of the ongoing investigation. According to the Swedish Security Service and prosecutor Mats Ljungqvist, their inspection of the Nord Stream 1 and 2 pipelines in the Baltic Sea discovered “extensive damage” and a number of “foreign items,” some of which had identifiable “explosive residue.”

Though, the statements didn’t address the major question of ‘who did it? But it surely signalled what TFI has been saying for some time now.

“US military and CIA sabotaged the pipelines.”  The Security Service statement said, “The investigation is extensive and complex and will eventually show whether anyone can be suspected of, and later prosecuted for this.”

The explosions took place east of the Danish Island of Bornholm and south of the Swedish mainland. There are several investigations going on, and Danish and German officials are gathering information as well. The European leaders were quick to blame Russia for the damage to Nord Stream pipelines. They claim that Russia had the motivation to sabotage the pipeline. But, their reasoning seems illogical.

The infrastructure that Russia spent billions to create and that it fully controls has no reason to be destroyed by Moscow. It also gave Moscow leverage over Europe to normalise the relations. The only country which has gained from the destruction is the United States of America. Since this time last year, the amount of gas the US exports to Europe has more than doubled. The graph below will help you understand this. As a result of selling its LNG to Europe at spot rates, the US has made billions of dollars.

Read our premium piece: Data shows US has earned $200 billion so far due to the Russia-Ukraine war

The findings by Swedish Security Service affirm Flightradar24 data, according to which US Navy Sikorsky MH-60R Seahawk helicopter spent hours hovering above the vicinity of the ruptured natural gas pipelines in the Baltic Sea near Bornholm on September 1, 2, and 3.

America has labelled the incident as “accident and not “sabotage.” A military official from Pentagon had said that the country feels it is too early to declare there was sabotage. Under the condition of anonymity, the source told Pentagon reporters, “The jury is still out. Many of our partners, I think, have determined or believe it is sabotage. I’m just — I’m not at the point where I can tell you one way or the other.”

Russia has expressed satisfaction over the new findings. Kremlin Spokesperson has said, “The very fact that data has already begun to come in, in favour of confirming a subversive act or a terrorist act… once again confirms the information that the Russian side has.”

Last month, the Russian defence ministry claimed that members of the British navy had blown up the pipelines. London dismissed this assertion as untrue and an attempt to deflect attention from Russian military shortcomings in Ukraine. The new findings violate the previous reports from seismologists in Denmark and Sweden claimed they had felt tremors close to the leaks, despite the fact that the signals did not reflect earthquake signals. As more findings would come, it’d become clearer who was behind the sabotage and who was not. Biden who has tried to capitalise on the Ukraine war by aiming to create an energy empire will be under the scanner. Europe would see the real face of Biden if the facts come out in open. And there are chances that, it’ll rupture the ties between the transatlantic powers.

And this has been possible under new Swedish PM Ulf Kristersson who has made it possible to bring the facts to the table. Former Swedish Prime Minister Magdalena Andersson said that her nation will not provide the Russian government with the results of its investigation into the explosions of the Nord Stream 1 and 2 gas pipelines.