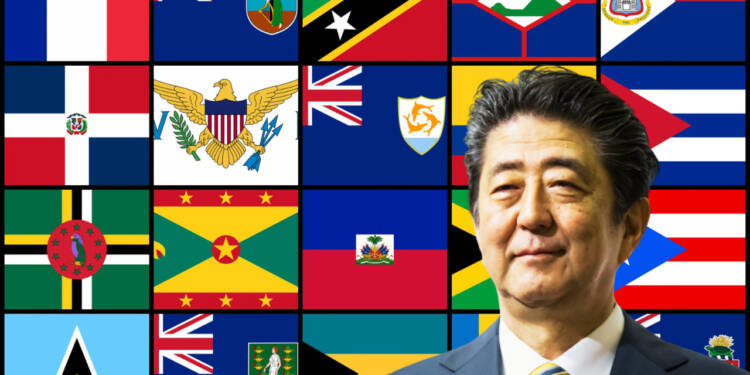 Japan and Caribbean ties are not new, they go back to the 1960s-1970s. However, the recent bounteous diplomatic relations between Tokyo and the Caribbean region trace their step to the Shinzo Abe Era.

Shinzo Abe was the Japanese Prime Minister when the first-ever summit between Japan and CARICOM countries took place in 2014.

In the same year, Abe took his historic 11-day tour of five countries in Latin and Caribbean nations (LAN). Shinzo Abe showed the qualities of a visionary at that time when he recognised the future significance of the Caribbean region and deduced how the region will be at the centre stage of world politics while US-China will fight for hegemony there.

Conceivable, he has tried to sow the seeds of Japanese footprints in the region, so that Tokyo can be a major party while the Caribbean weigh its options for liberating their region from the hefty influence of both Washington and Beijing.

And that is exactly what is happening. With the hot issue of Taiwan brewing tensions in the global world, it is the Caribbean that has caught the eye of US and China both. Both nations that are known for their shrewd politics are coming one by one to the different Caribbean countries for buying them to take their sides when the time comes.

However, the Caribbeans have easily found another alternative to both parties. You guessed it right. Japan!

St. Lucia, which is one of those few countries that recognise Taiwan’s individuality, has recently received a generous fund from a struggling Japan. It is provided as an aid for the ongoing floods and also for rejuvenating Choiseul Fishing port, an important part of St. Lucia’s economy.

Next is Jamaica, usually call a US ally, the country has received a major investment from Japan every now and then. Recently, Japan again announced its will to contribute more to the development of Jamaica.

Shinzo Abe gave “three Pillars” for Japan’s policy toward the Caribbean. The first one is the development of the region’s renewable energy sector and addressing environmental vulnerabilities. Second is the development of the cultural and educational exchange. And the final one is furthering cooperation between Japan and CARICOM in the global arena.

All these three pillars are thoroughly followed by Japan all these years.

Read More: St. Lucia’s economy is all set to blast off after Japan’s $23 million booster shot

In 2014, Tokyo announced that it is investing $15 million in eight Caribbean countries aimed at mitigating the impact of climate change, reducing emissions, and ending overdependence on foreign oil. Even today, through participation in RELAC, JICA(Japan International Cooperation Agency ) plans to quickly identify issues and support needs related to the introduction of renewable energy in the region, working towards timely cooperation. Then, Abe expressed his admiration for Caribbean contributions and successes in the fields of academics, music, and sports, and pledged to “dramatically expand” cultural and educational exchanges with Caribbean countries. His government issued a grant of nearly $200,000 to the University of the West Indies — a public university system serving 18 Caribbean countries — for the expansion of Japanese language education. Today as well this cooperation is going ever strongly with different student-exchange programs and cultural fests organised in both the region.

In his address to CARICOM, Abe announced that Japan intends to strengthen cooperation with Caribbean countries at the United Nations in its efforts to reform the UN Security Council. In 2021, Seventh Japan-CARICOM Ministerial-Level Conference, took place where both parties discussed more political cooperation.

After a decade-long lapse in Japan’s economic engagement with the Caribbean community during the 1990s economic slump, Japan has vigorously begun to re-engage with Caribbean nations. After that, Tokyo never looked back.

However, not only these areas, but Japan also has made significant contributions to poverty reduction and improving the overall quality of life for millions in the Caribbean, especially in traditionally underserved communities.

Now, it is time for the Caribbean nations and Japan to strengthen these ties more as they both need each other for maintaining a power balance in their respective regions. With the world changing so drastically, this solidarity given by Shizo Abe to both nations is no more than a panacea for both regions.

A “western gift” to the Caribbean at COP27, but is it worth it?