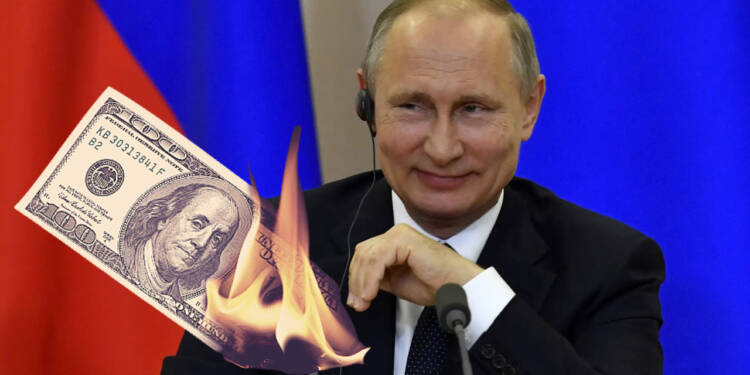 “No matter what political reasons are given for war, the underlying reason is always economic”. This line from A.J.P Taylor clearly describes the current scenario in the Russia- Ukraine war. Wars are not just played out militarily but also economically. Today, states use a variety of tools to wage economic warfare against one another, including tariffs, protectionist policies, hostile infrastructure initiatives, and sanctions. However, one nation enjoys an unfair advantage in the economic conflict. It is the United States.

It is only the US that enjoys an edge due to its control of the US Dollar. But using the dollar as a weapon is now going to backfire. As the US can’t get enough of sanctioning other nations, the countries are now seeking to curb their dependence on the dollar. And hence the world is now entering the era of de-dollarisation. When the Russia-Ukraine war broke out, the USA responded by threatening Russia with its economic weapon: the dollar. The Western alliance took advantage of Russia’s reliance on the SWIFT financial messaging system in an effort to weaken Kremlin’s economic position. However, Russia wasn’t unprepared for the move.

Russia developed its own payment system for internal use several years ago. As of September 2018, 416 Russian businesses and government agencies had signed up to use the System for Transfer of Financial Messages (SPFS), according to the Central Bank of Russia.

Read More: So Russia has found a solution for SWIFT sanctions as well

By using its control over the global supply of commodities and energy, Moscow was able to stabilise its finances. It also put extra effort into developing a native financial communications system. The Russian financial messaging system (SPFS), which is the country’s own version of SWIFT, has extended an invitation to SCO members to join. And meanwhile, the Russian central bank rapidly reduced its holdings of US Treasury bonds. Russia sold off $47.4 billion of its $96.1 billion in US Treasury bonds in April 2018 alone, accounting for roughly half of its total US debt.

In the latest move, Moscow is exploring ways to decouple its national-currency trade from the dollar. Despite Russia’s increased efforts to move international settlements to national currencies in response to sanctions from numerous countries, local currency cross-border trade exchange rates are still determined using the dollar. The Finance Ministry and Central Bank of Russia are currently collaborating with banks on a system that would enable Russia to set prices for contracts with international parties using new indicators that don’t take the dollar exchange rate into account.

Read More: After Russia, the next big jolt for the German economy may come from India

Now, the question arises, how will they do that? Well, as reported, one way could be to make a basket of currencies that are apparently tied to one another. Another option is to create a new payment unit for international trade agreements, the value of which would be linked to precious metals and other commodities like gold. In that case, the average prices of these commodities on international marketplaces will determine the exchange rate.

Reports also say that the exchange rate in global trade contracts could be determined using the Chinese yuan rather than the dollar. However, to be implemented, the method would need Beijing’s approval because the yuan is not a freely convertible currency. But it is clear that nations are taking steps to reduce their reliance on the dollar and are attempting to develop alternative payment methods now that they are aware that they may easily find themselves in the firing line.

And if enough nations stop using the dollar, the value of the US currency would collapse. Global economic de-dollarization would exacerbate the US financial crisis and lead to hyperinflation. Thus, US economic weapon will be defeated and the day will come soon when Dollar supremacy will be ended and so will the US hegemony.