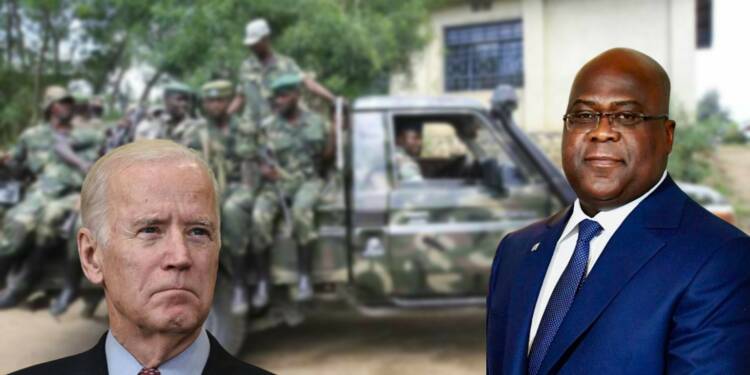 DRC’s leader had a meeting with Paul Kagame, João Lourenço and Évariste Ndayishimiye in Luanda for the peaceful reconciliation of the genocide being committed in eastern DRC by M23 insurgents.

The peace deal noted that regional forces would continue their operation to weed the rebels of the terrorist group which have captured many territories.

Abandoned by its masters

The M23 received funding and assistance from the US and Rwanda. Biden, through Kagame, instructed the terrorists to steal the mineral wealth of DRC such as gold, cobalt and uranium. They also refused to condemn M23.

However, recently, both nations have abandoned the M23. As Washington and its allies held M23 responsible for the war crimes and massacre in east DRC, they called on M23 to immediately cease its atrocities on Congolese people.

Similarly, Kenya’s former president Uhuru Kenyatta, who is involved in peace talks on this issue, managed to convince Rwanda’s leader Paul Kagame to stop supporting the M23. This resulted in Kagame too calling on the terror organisation to put an end to its brutalities.

Now, M23 was not included in the discussions held between DRC, Rwanda, Burundi and Angola. In addition to suffering military defeats, M23 was dealt another blow when it found out about the successfully concluded negotiations between these nations.

While M23’s spokesperson told the media that it found out about the peace agreement through social media, its leader Bertrand Bisimwa is now requesting the DRC government to hold talks with M23 to resolve the conflict. He said, “Give us direct negotiations with the government to resolve the root causes of conflict that are producing all these wars here.”

It is clear that the terror group is now begging for recognition from DRC and want to be included as a party in the peace deal. However, Tshisekedi’s regime has firmly stated that it will not negotiate with terrorists under any circumstances.

M23 realises that it is in a helpless position since Kenya’s William Ruto has deployed more than 900 troops in eastern DRC to help his ally Tshisekedi in getting rid of them once and for all. While announcing his decision to send the Kenyan Defense Forces (KDF), Ruto emphasised the partnership between Kenya and DRC. Terming DRC a significant economic partner.

Similarly, Uganda is also helping the DRC by sending 1000 soldiers to its eastern region of Ituri. Burundi too has sent its forces to the South Kivu province of the DRC.

The M23 knows that eventually its fighters will be killed or prosecuted, therefore it is begging for recognition from Felix Tshisekedi. It has seen how the Ethiopian government, which signed a peace agreement with the TPLF, has promised that it will reintegrate its fighters into the society, give them jobs and has even asked to join the military. Also, when the peace deal between DRC and M23 was signed in 2013, it was agreed upon that fighters from M23 will be assimilated into the army which was done later.

M23 wants the DRC government to give it amnesty and rehabilitate its members in the society. However, the country, which was subjected to years of misery by it, will never forgive it, Felix Tshisekedi has time and again been the victim of its outrageous tactics, he cannot take chances anymore. Therefore, he will certainly not recognise the M23 and won’t rest until the entire problem is eradicated.