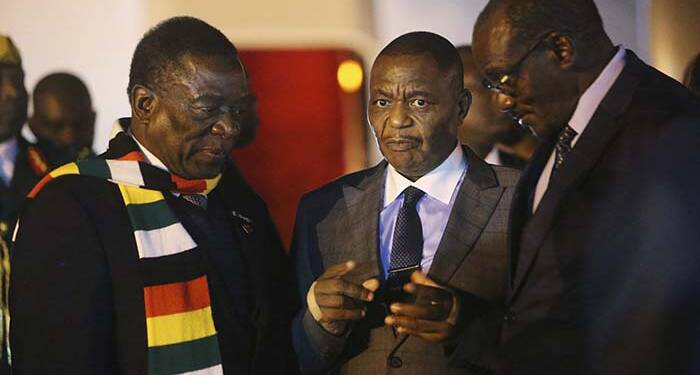 Zimbabwe has been a victim of not only a draconian ruler who terrorised its people for decades but also of the self-proclaimed experts of liberty such as the US and EU. However, after a very long time, Zimbabwe is blessed with a leader whose decisions has become an inspiration for other African states.

But the arrival of one man can ruin everything.

Zimbabwe’s President Emmerson Mnangagwa has appointed the former Vice President, Kembo Mohadi, as the deputy president of his party Zanu PF during a party meeting. The appointment is a significant development in Zimbabwe’s politics, as it is certain that in the next general elections which will be held next year, Mohadi will again be the vice-presidential candidate.

Now, Kembo Mohadi had a bad reputation as he was involved in a sex scandal last year. Due to which, he was forced to resign. The leaked phone recordings proved his guilt. In fact, he even acknowledged it, telling, “I have been going through a soul-searching pilgrimage and realised that I need the space to deal with my problem outside the governance chair.”

Now, after a very long time, a government with integrity and a decent track record on governance has come to power in Zimbabwe. After decades of authoritarianism and corruption under former leader Robert Mugabe, current President Mnangagwa came to power by promising economic reforms.

He is quite successful in his feat, as recently Zimbabwe’s government announced that it is expecting to harvest around 380,000 to 400,000 tons of wheat this year. In fact, last year farmers in the nation grew wheat on 66,435 hectares which is the third highest hectarage since independence and fifty per cent more than its previous year.

Read more: Europe is begging for lithium from Zimbabwe via an African company

Zimbabwe, whose economy is slowly growing, due to sanctions from the US and Europe for more than two decades. The West justified its decision by stating that there is no democracy and widespread election fraud in Zimbabwe. However, the real reason for their decision is that Zimbabwe refuses to be their puppet and has its own independent foreign policy.

Mohadi: An upcoming wave of disaster

Now, as Kembo Mohadi has been appointed the Deputy President of Zanu PF, it is clear that he will be the party’s VP candidate in the next presidential elections.

In the upcoming general elections, Emmerson Mnangagwa will most likely be the winner, considering his efficient administration. However, by having Mohadi as his vice president, the reputation of Mnangagwa’s government will be tarnished. Mohadi was involved in controversies, therefore giving him a significant position in the government will have a negative impact on all the good work that Mnangagwa is doing for Zimbabweans.

Until now, the US and Europe have refused to lift sanctions on the country by citing corruption, election irregularities and abuse of civil liberties. With Mohadi’s re-entry into Zimbabwe’s politics, Biden and his allies will get another excuse to continue their atrocities on the people of the country.

Hence, with Mohadi’s accession to power, the West will get another reason to not lift its sanctions on Zimbabwe. In this backdrop, Mnangagwa must not give an excuse to the Western nations to punish his country which is receiving widespread support from South Africa and Botswana for the removal of sanctions.