Stressing the significance of the sovereignty of Taiwan, Pierre highlighted the integrity of elections in St. Lucia and also praised Taiwan for its democratic institutions and a tradition of asserting its political ambitions in the international stage There is widespread support for Taiwan in the Caribbean. Its allies include Belize, Haiti, Paraguay, Saint Kitts and Nevis, Saint Lucia, Saint Vincent, the Grenadines etc.

In such a backdrop, China is aggressively involved in the Caribbean to counter the relations these nations have with Taiwan. China is trying to influence them into changing their loyalties by investing in a string of infrastructure projects and employing unique methods to enter the Caribbean’s financial market.

One of the methods is Citizenship By Investment, as per which a second citizenship and passport can be acquired in another nation by investing in its economy. China has used this concept to increase its presence in the Caribbean, in fact, most applicants for citizenship by investment are Chinese nations.

Similarly, Chinese International Construction and Engineering Contracts (ICECs), which are state-owned enterprises, are establishing their influence in the Caribbean.

China Harbour Engineering Company (CHEC) has many projects in most nations in the Caribbean. In fact, in 2009, Chinese contractors and policy banks were involved in the construction of a highway project.

Not only infrastructure, Beijing has also invaded the crypto market of the Caribbean. Huobi, the biggest cryptocurrency, signed partnership with the Commonwealth of Dominica, TRON and DMC labs. The three platforms are supported by Dominica’s government.

Now, Saint Lucia is one of the nations in the Caribbean which have strong relations with Taiwan. Both countries inked an agreement which focused on the generation of youth entrepreneurship in Saint Lucia. The deal pledged investment of $2.01 million in St Lucia. Similarly, in January, Taiwan signed an agricultural partnership agreement which promised exponential growth in the farming industry.

Now, on November 28, St Lucia’s Prime Minister Philip J. Pierre visited Taiwan as part of a five day visit to the nation. Pierre told the media there that the friendship between both countries is deep and strengthened, stating that St Lucia does not believe in interfering in the internal affairs of other countries and emphasised that Saint Lucia decided to consolidate its diplomatic ties with Taiwan.

Stressing the significance of the sovereignty of Taiwan, Pierre highlighted the integrity of elections in Saint Lucia and also praised Taiwan for its democratic institutions and a tradition of asserting its political ambitions in the international stage.

Relations between Saint Lucia and Taiwan were first established in 1984. In 1997, they were severed as the Caribbean nation switched its loyalty to Beijing. However, in 2007, relations between the two were restored.

Pierre’s statements indirectly criticised China for its neo-colonial tactics to violate the sovereignty of Taiwan and wider conspiracy to overthrow its democratic regime. Xi Jinping has violated many international laws of territorial integrity to suppress the voice of Taiwan and install a puppet leader there. In light of this blatant display of disgraceful authority, a nation like Saint Lucia took a stand in support of its ally Taiwan. 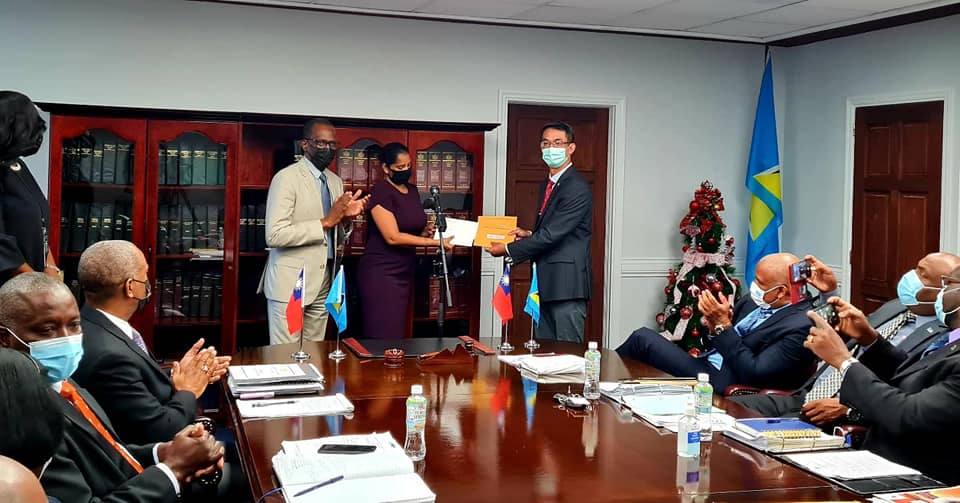 In fact, Pierre indirectly stated that he will support Taiwan, which is rich in gold, copper and oil and gas, even in the wake of an invasion which Beijing is planning to launch in future. St Lucia has made it clear that it does not need to be told whom to establish its ties with. In the backdrop of Pierre’s position on Taiwan, St Lucia’s foreign policy objectives recognises that Taiwan’s political and civilian crises are going to be resolved through peaceful means, not by Jinping’s draconian measures.

St Lucia realises that what happened in Hong Kong, where in the name of “One Country, Two Systems” China perpetrated countless atrocities, must not be repeated in Taiwan. Although there are politicians in the Caribbean nation which have exhibited support for Beijing, Pierre’s reiteration on the issue confirms that Taiwan has allies which will always stand behind it. And will continue its fight to represent its interests in the global arena.