At a time when rich countries of the West are trying to dictate developing countries about democracy and climate change, a leader from Barbados has emerged to not only highlight their flaws and hypocrisy but also give meaningful solutions 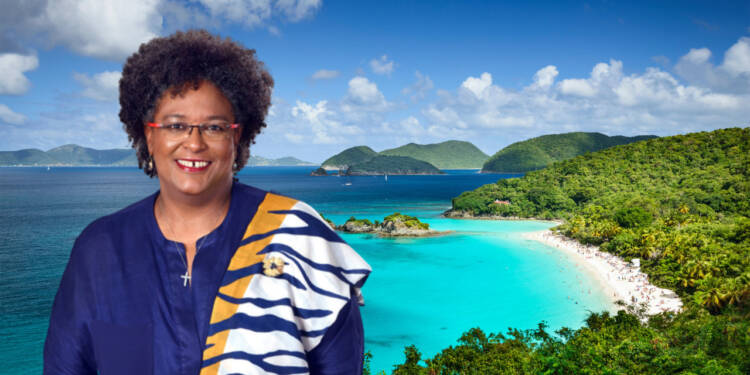 She is the eighth person to hold the office of the Prime Minister of Barbados and the first woman leader of the Caribbean nation. She is also the first Barbados’ prime minister who was appointed under the new republican system in the wake of constitutional amendments which removed the concept of constitutional monarchy.

She was elected as a member of parliament in 1994. She headed a series of ministries, in fact she is also the first women attorney general of Barbados. This year, her party won by huge margin, electing her for a second term in January.

Now, the Caribbean region is mostly known for being a tax haven, disaster-prone areas, drugs and crimes. However, with the arrival of Mia Mottley things are changing for the Caribbean.

Her ambitions and actions are setting a stage for the Caribbean where it will be viewed from a constructive perspective by world leaders. In fact, even when she was young, Mottley deeply cared about important issues which are affecting her country and the world. She has extensively studied the concept of poverty, climate change, constitutionalism etc.

But why did Times, a West-funded media group, choose Mia Mottley as an influential person?

What makes her stand out? Let’s understand in this biography article of Mia Mottley.

Mia Mottley’s proposed measures to improve the economy of Barbados are pragmatic. She has suggested three steps: First, growth must be promoted without resorting to tax concessions or subsidies, second, restructuring public debt in order to make fiscal space and third, generation of annual fiscal surpluses.

In fact, she introduced a mini budget soon after her election, which brought a series of additional taxes and which are meant to change the fiscal structure. She also hiked the salaries of public servants by 5% who have not seen the growth in their income since 2007.

Apart from the economic front, Mia Mottley promulgated constructive policies to strengthen the democratic institutions of Barbados. Recently, she brought down the age of eligibility to get elected to the nation’s parliament from 21 to 18. Similarly, Mottley also made changes to the constitution which will allow the opposition in Barbados to recommend appointments to the Senate even when they have not won any seat in the House of Assembly.

During a speech in parliament, Mottley emphasised that the Constitution of a country must represent the voice of the public and the parliament must become a forum to empower the people rather than becoming a weapon to repress civil liberties and dissent.

While speaking during the debate of the Constitution (Amendment) Bill 2022, she stressed that her regime is taking steps to pass laws which will not discriminate against people on the basis of age and advocated for the creation of a system where the perspective of the opposition parties are equally given significance.

But if there is one thing which catapulted Mia Mottley to the international stage, it was her speech at the United Nations General Assembly this year. In her remarks, Mia Mottley didn’t shy away from criticising Western leaders who are forcing their agenda of climate change on developing countries of Asia, Africa, Latin American and the Caribbean.

Citing the lyrics of reggae artist Bob Marley, she said somebody needs to take a stand for the rights of her people. Mottley’s passionate speech drew attention and attracted many headlines around the world. As aforementioned before, it introduced the US, France, Canada and Germany to a leader from the Caribbean who is not only practical regarding the battle against climate change but will also scrutinise their actions in causing the problem in the first place.

At COP27, Mottley condemned Biden, Leyen and Macron for not fulfilling their promise to provide climate funds to developing countries and then pressuring them to adopt green energy without any comprehensive strategy.

However, Mia Mottley has been campaigning against climate change and pollution for years and has brought Barbados to the front of the international movement against the climate crisis. For example she supervised a program in Barbados which involved planting 1 million trees, the plan’s goal was to enhance food security and build climate resilience.

Similarly, Mottley’s Bridgetown Initiative is another concept which demonstrates her efforts in reforming the international financial system.

Under the initiative, she has suggested three steps. First, the debt crisis must be averted with emergency IMF relief and long-term concessional funds, which should be lent over at least 30 years. Second, the lending capacity of multilateral banks must be enhanced to developing states by $1 trillion which will be invested in climate action.

Hence, Barbados is blessed with a leader who is not only trying to emancipate the nation but also proving a strong global leader.