The Prime Minister’s incompetence in taking ‘no-nonsense’ decision convey his unwillingness in keeping Kingston out of the interference of foreign powers like USA and China. But, maybe no more?

by Surabhi Somvanshi
in The Caribbean
Reading Time: 3 mins read
0 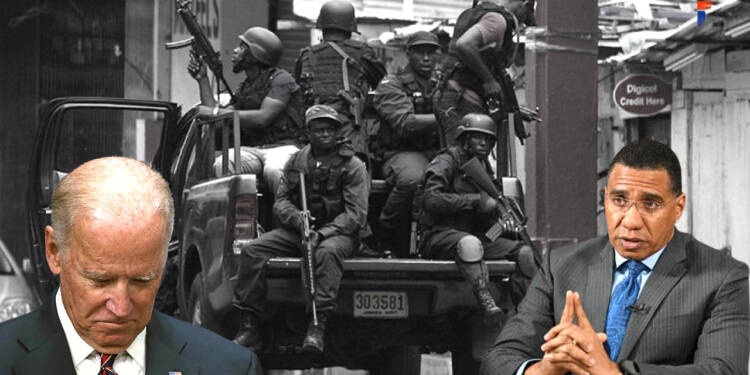 On Tuesday, Jamaican Prime Minister Andrew Holness left the country for Washington, where he will meet with a number of US state agencies to discuss security issues.

Holness is expected to meet with the executives of the Justice Department, and the Federal Bureau of Investigation, among others.

The Reason of the Visit

Now, Holness said the meetings aim to break the link between overseas criminals and those on the island, which frequently results in murders and bloodshed.

Holness said the meetings are to start the process of “getting a more intense cooperation in dealing with the foreign actors in our local crimes”.

His statements do not come as surprise as Jamaica has one of the highest murder rates in the Carribean (per 100,000 people), And above that, recently the crimes emerged at such a fast pace that the Jamaican government had to declare a “State of Emergency” (SOE) over several areas across the Island on November 15.  It ended on November 29 after it failed to pass a senate vote to have it extended.

However, after that a widespread state of emergency has been declared again to fight violent crimes. The reason stated by the Prime Minister was to prevent the state from a collapse and to provide comfort to the Jamaicans for the upcoming festive season.

The State of Emergency was then enforced in nine of Jamaica’s 14 parishes, including Clarendon, Saint Catherine, Westmoreland, Hanover and parts of Kingston, Saint Andrew, Saint Ann and Saint James, which encompasses the popular tourist destination Montego Bay.

A huge illegal drug market, human trafficking, illegal migration are some of the common issues in Jamaica. This tells us that Jamaica is fighting to survive these days, but why is there so much crime in this Caribbean nation?

But, how is all this linked to Washington? Fortunately, in his outburst, PM Holness himself gave a reply to this big question.

Holness said the meetings are intended to start the process of establishing more intense cooperation in dealing with “foreign actors” in the country’s local crimes.

He said, “I’m serious. If you are overseas and you are sponsoring, directing, and soliciting; if you are financing crime in Jamaica, we’re going to get you”.

The PM though tried to lessen the impact of his accusations of the US by pointing out that the Jamaicans living overseas are also behind the issue. It is yet to see how this statement of his will sit with the Jamaicans.

For those who don’t know, Jamaica also has signed an Extradition Treaty with the USA. Both nations have several cases of bitterness developed due to this treaty also.

Now, coming back to USA, it has long been utilising Jamaica for its own benefits. Rich businessmen and powerful politicians have misused their positions, and sponsored crimes in these small Caribbean nations. Ignorance by Washington of these organised crimes resulted in these nations becoming the hub of criminals.

Washington established puppet governments in these states and bought them for fulfilling its own ambitions in the region, which are exploiting their natural resources while keeping them poor and frail.

It’s not hidden from anyone that Jamaica’s Prime Minister Andrew Holness is spineless. He has handled his nation without any ambitions and without any concern for its sovereignty.

However, given the dissatisfaction of his voters, he might have been trying to go rogue these days, as he has gone knocking on the doors of his political masters asking them to take responsibility.

This budge by Holness, who has long been sided with the US, is interesting. Now, only time will tell if his strategies will help him maintain his position of authority or if he will pay the price for devolving into a snarling rottweiler.