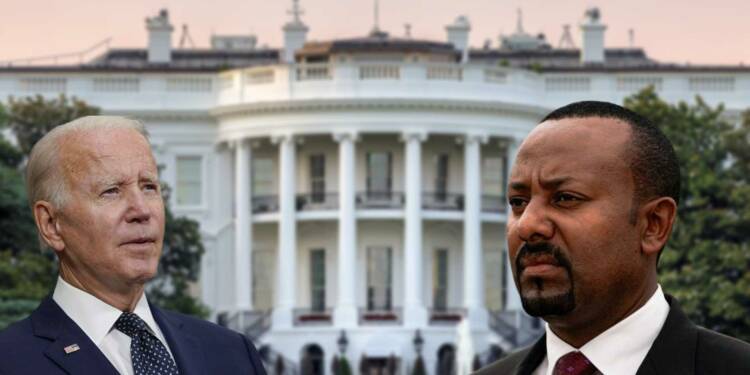 There is no nation in the African continent that has tizzied Biden more than Ethiopia. Ethiopian PM Abiy Ahmed has become an arch-rival of American intervention in the African continent. He has frequently criticized the US for treating African nations in an imperialist and patronizing manner and for attempting to impose its political narrative on the entire continent. Biden decided to stay as far away from Abiy as he could. But when facing a bright star, it is impossible to keep yourself away from its heat. In the most recent African-US summit, Abiy Ahmed completely dismantled Biden and his accomplices, causing yet another major African humiliation of the US.

The Biden administration had decided not to invite Prime Minister Abiy Ahmed Ali to the United States.-Africa Leaders’ Summit and Ethiopia President was invited for the summit.

Reportedly, the Ethiopian President and Head of state, Sahle-Work Zewde passed the proposal to the Prime Minister who is the Head of government.

If one remembers, one senior official of the Biden administration had stressed, “The invitation that the president sent out is extended at the head of state level…” Despite this, Biden was caught off guard when the Ethiopian PM landed in Washington, D.C for the Summit.

This was such an embarrassing situation for the US President in front of multiple African heads of state.

However, this was just the start. The officials had literally no idea what exactly was waiting for the Biden administration ahead of the summit.

Because Abiy Ahmed was an official representative of Ethiopia, the US unquestionably had no power to ignore him on American soil. Hence, US Secretary of State Antony J. Blinken met with Abiy Ahmed on the sidelines of the U.S.-Africa Leaders’ Summit in Washington.

Blinken welcomed the November 2nd peace agreement reached in South Africa between the Ethiopian federal government and the Tigray People’s Liberation Front (TPLF) but also called for all Eritrean forces to leave Ethiopia.

The secretory of the state tried his best to tow a fine line. However, the Tigrayans in the United were not at all happy with this meeting.

While Blinken was meeting Abiy Ahmed in Washington D.C, a group of Tigrayan protesters were arranged for protesting outside Convention Center in Washington.

The arranged-protestors tried to thrash Ethiopian Prime Minister Abiy Ahmed Ali by stressing that he is a killer and US officials should have never met him. Some even added, Biden should not have invited a man with blood on his hands.

Abiy’s clampdown on Biden and TPLF

Abiy Ahmed came in the crosshairs of the US and the TPLF during the Tigray War. The bloody battle was an armed conflict that lasted for two years in the Tigray Region of Ethiopia between the Ethiopian federal government and Eritrea on one side, and the Tigray People’s Liberation Front on the other.

The TPLF received political, military, and psychological assistance from the West, particularly the US, throughout the conflict. The backing included denoting TPLF as Tigrayan Defense Forces (TDF) in order to disrespect Ethiopia’s sovereignty. The sanction-saber-rattling of the United States is also a well-known phenomenon.

All in all, the west fought a lost battle against Ethiopia led by Abiy Ahmed. And thus, Biden was in no mood to invite Abiy Ahmed to the white house.

Read More: A Caribbean’s-Africa partnership is the most natural thing, Barbados is the first to realise it

Biden’s most ambitious project was calling the leaders of Africa in order to set the agenda against Ethiopia and other anti-western countries, and regain some brownie points. But Abiy arrived in style, and the grandmaster of the west was so perplexed by this that he did everything in his power to obstruct the Ethiopian leader’s entry into the United States. Honestly, Abiy Ahmed has destroyed Biden and his accomplices in a way no foreign leader ever has.