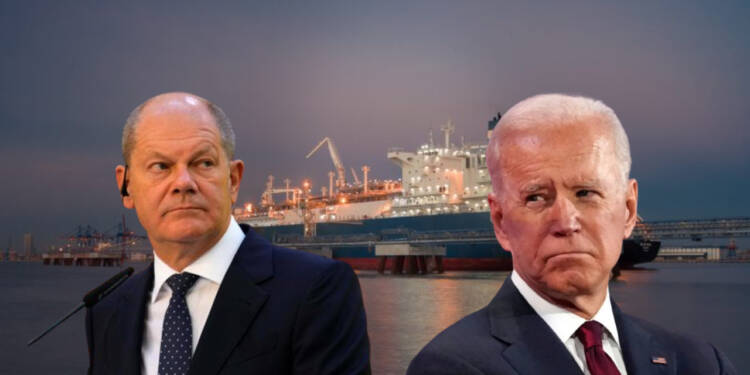 Germany LNG terminal: According to the dominant narrative, the United States of America has been a tremendous assistance in alleviating the European crisis. However, the actuality is very distinct. America has used the European crisis as a soapbox to bolster its coffers. As they sell record volumes of liquefied natural gas (LNG) to the European Union at rates that have increased since Russia’s invasion of Ukraine, U.S. LNG exporters have emerged as major winners from Europe’s supply crisis. However, Washington’s prosperous times are soon to be overshadowed by gloom. Let me explain

German LNG import infrastructure is now operational, ushering in a new era in German energy policy as the country is no longer able to purchase cheap Russian gas. The special jetty was constructed in months to host the “Hoegh Esperanza”, a floating LNG terminal that has become a beacon of hope for the Germany government.

Cooled down to -162 °C, gas can be compressed, turned into a liquid and shipped around the world as LNG. Germany, which received almost all of its gas via pipeline from Russia and Norway, never had the infrastructure necessary to turn LNG back into gaseous form. German Chancellor Olaf Scholz said, “This is now the new Germany-pace at which we are bringing infrastructure projects forward,”.

“Today we are taking a very important step for security of supply in Germany,” explained Vice-Chancellor Robert Habeck.

But in all honesty, Washington would suffer more as a result of the latest German infrastructure than Moscow.

We all know that the U.S. and its LNG producers benefited heavily from the European gas shortfall and will continue to do so if sanctions continue to be imposed on Russian volumes.

The US LNG exporters finished projects that had been in development for years to bring plentiful shale gas supplies to foreign markets just when European gas prices reached all-time highs. U.S. liquefied natural gas (LNG) exporters are emerging as big winners of Europe’s supply crisis as they export record volumes to the European Union for the third consecutive month at prices that have rallied since Russia invaded Ukraine. Major U.S. developers like Cheniere Energy Inc (LNG.A), the largest U.S. exporter, are among the top beneficiaries after having signed numerous long-term deals to sell LNG in recent months.

The U.S. Energy Information Administration projects U.S. LNG exports will reach 11.4 billion cubic feet per day (bcfd) by the end of  2022. That would account for roughly 22% of the expected world LNG demand of 53.3 bcfd next year, according to analysts at Goldman Sachs and that would outpace both Australia and Qatar, the two largest exporters at present.

It is interesting to note the fact that 4 million tonnes of LNG exported from the United States in February, which is equivalent to around 307 billion cubic feet of gas, would have been worth about $17.2 billion in Europe at $56 per mmBtu. According to Robert Songer, the LNG analyst at data intelligence firm ICIS, the total number of U.S. cargoes shipped to Europe in the first two months of 2022 reached a record of 164. The previous record was 125 cargoes in the first quarter of 2020, he added.

Senior officials from the two largest nations in the EU, France and Germany have even accused the US of overcharging for liquefied natural gas (LNG), profiting from the energy crisis, and using the conflict in Ukraine to bind Europe to its gas. According to reports, Germany’s economy minister Habeck alleged that LNG exporters, particularly the US, overcharged for gas at a time when Germany’s largest companies are closing manufacturing facilities due to high gas prices. Indirectly attacking the US, he said, in some situations, even friendly nations charge “astronomical charges,”. He also added that this situation has led to issues that need to be discussed.

Following the embargo on Russia, the US monopolised European markets like there was no tomorrow. The US is the biggest winner from the restructuring of the global energy markets brought about by the conflict in Ukraine. We must understand that US’ apparent messiah complex is only a veil. The truth is that the US treasury gets bigger the longer the conflict in Ukraine lasts. Not to mention the billions that the American military industry makes from a protracted conflict in Ukraine. It is naive of the German authorities to believe that the current pipeline will harm Russian interests. Moscow has cemented its market share in the nations of the Global South and it will have negligible impacts on its LNG demand after this move of Germany. The current infrastructure, if anything, would be a major setback for Biden’s America, and Russia.

Kukke Subramanya Temple Timings, Travel Guide and how to reach