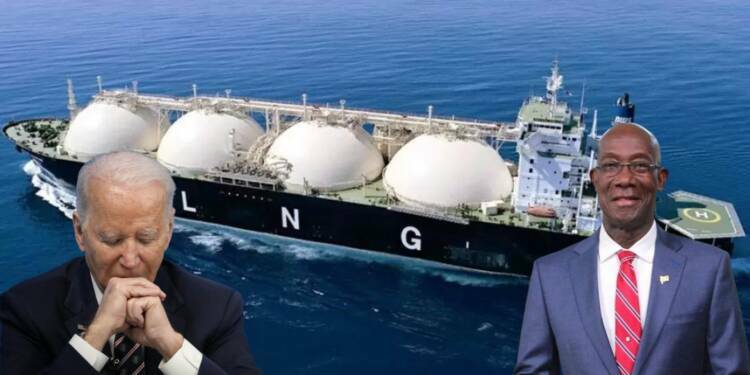 Trinidad and Tobago’s regime has started the process of extraction of gas with the assistance of BP and Shell. Seeing this, Joe Biden is alarmed as this can have drastic impact on the monopoly of the US on Europe’s gas supply.

As a consequence, he has instructed the Inter-American Development Bank to convince Trinidad and Tobago to halt its ambitious project.

According to the Caribbean News Global, the Inter-American Development Bank (IDB) will provide a loan of $80 million to Trinidad and Tobago to facilitate in the enhancement of the efficiency, quality and strength of its water supply and security.

The loan is a part of the $315 million credit line for Trinidad and Tobago’s National Water Sector Transformation Program. This initiative focuses on boosting the capability of the country’s ministry of public utilities and its agency, the Water and Sewerage Authority (WASA), so that they are better equipped to regulate the water resources.

Now, the Inter-American Development Bank (IDB) is an international financial organisation which is based in the Washington DC. It works for the economic progress and integration of the Latin American and Caribbean region. It must be noted that IDB is an institution which is financed and controlled by the US government.

Read more: Trinidad and Tobago is gearing up to take its energy remote control from Washington

Reason for the grant

The government of Trinidad and Tobago signed a partnership agreement with BP and Shell, two major Western energy corporations. The deal restructured the ownership rights of the Caribbean country’s Atlantic LNG project. Meaning Trinidad and Tobago’s state-owned energy company, called National Gas Company, will have a larger stake in the project.

When it comes to energy, Europe is experiencing an unprecedented shortage. In fact, according to the European Commission’s autumn forecast, the EU nations are struggling with skyrocketing oil and gas prices in the wake of Ukraine-Russia conflict.

Therefore, in such a scenario, the US is exploiting the vulnerable position of Europe and is selling it gas at high rates earning massive profits. As a matter of fact, according to the data of Refinitiv, Washington exported 39 billion cubic meters of gas to Europe which amounts to 68% of US’s total gas supply. Similarly, in August, 60% of USA’s LNG exports went to the EU.

Read more: Trinidad and Tobago plan to snatch the global energy market from the US

Tensions erupted between Trinidad & Tobago and the US, when Biden started investigating for imposing sanctions on the Caribbean state for sending an oil shipment to Venezuela. The US also issued an alert, advising its citizens to avoid visiting Trinidad and Tobago.

It has realized that in order to curb the dominance of the US, the first step is to break US-EU ties. And Trinidad will do that by selling Europe gas at cheaper rates. This will eventually lead to the end of Biden’s monopoly over the gas supply to Europe.

Joe Biden knows that in future, Trinidad will emerge as a major supplier of LNG and will start selling gas to Europe, the US’s main buyer, which will end Washington’s monopoly. The US, which is benefitting from the hiked energy prices in Europe, is threatened by the progress of Trinidad, it doesn’t want it to become self-sufficient. Hence, this financial grant given by the IDB to Trinidad and Tobago is a bribe by the US to persuade Keith Rowley’s regime to halt its Atlantic LNG project.

However, Biden will not succeed in his malicious bid because Trinidad and Tobago, which is a victim of US’s attempts to harm its sovereignty, has realised that the only way to challenge the West’s hegemony is by augmenting its energy sector and the economy. Washington’s plan to deploy IDB will fail eventually.