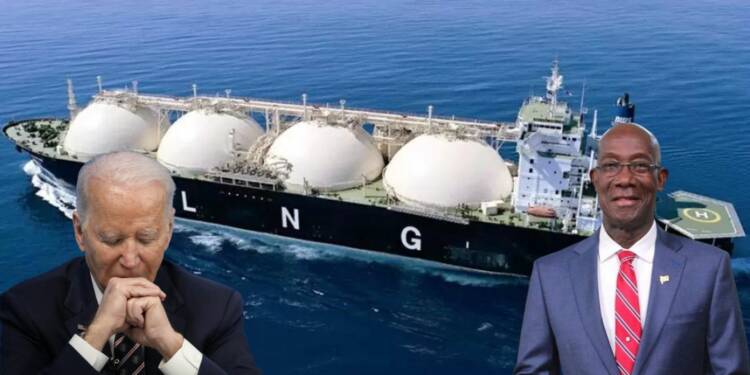 Biden tried to create a hostile environment for Russia but ended creating one for America itself. When Europe was reeling under energy crisis, Biden wove a net for Europe to further America’s economic interests but failed miserably. In this backdrop, Trinidad and Tobago is profiting from the spider-net woven by Biden.

Multinational corporations BP and Shell have signed a partnership agreement with the government of Trinidad and Tobago for restructuring the ownership in nation’s Atlantic LNG project. According to the deal, Trinidad and Tobago’s state-owned National Gas Company will have higher stake in the four-train liquefaction facility.

The decrease in the production of natural gas prompted Trinidad and Tobago, whose Atlantic project has a capacity of 15 million metric tons per year, to hold negotiations with the BP and Shell for restructuring of ownership rights.

The NGC’s president, Mark Loquan, said the partnership agreement will also pave the way for further development of offshore resources in Trinidad and Tobago. While BP in a statement said, “The new construct will also facilitate a market-reflective pricing mechanism that provides fair value from the sale of LNG for both the country and the shareholders.” (sic)

The Caribbean country is a major supplier of LNG, in fact it has sent many shipments to United Kingdom particularly during winter season when demand was high. This is also helping Trinidad and Tobago in increasing its economy.

Read more: Trinidad and Tobago is gearing up to take its energy remote control from Washington

Now, in the backdrop of Ukraine-Russia crisis, the US and Europe imposed sanctions on Russia which were intended to damage is economy. However, their measures had the exact opposite effect on the economies of US and Europe which are currently suffering from an unprecedented economic crisis.

In fact, according to the European Commission’s autumn forecast, the economic output of EU countries has declined in the last three months of this year and will continue next year. High energy prices, cost of living and high interest rates have led to recession in Europe. The growth forecast for 2023 has been lowered to 0.3% from 1.4% which was predicted in the previous forecast.

In such a situation, the US was taking advantage of the helplessness of Europe and selling it natural gas at hiked prices, energy companies and traders are earning huge profits.

The European countries, which are dealing with a severe shortage of essential commodities in the wake of Russia cutting its supply, are scrambling to fill their storage tanks before harsh winters.

Taking this into account, the Biden administration exported 39 billion cubic meter of LNG to Europe, which is 68% of its total gas supply, according to Refinitiv data. Similarly, 60% of US’s LNG exports in August this year went to Europe.

In this backdrop of US’ monopoly over gas supply to Europe, Trinidad and Tobago can emerge as a major supplier.

Lately, the relations between the US and Trinidad and Tobago has severed. As according to a report by the Caribbean News Global, the Biden administration started probing the Caribbean nation by imposing sanctions on it for sending an oil shipment to Venezuela this year. Similarly, the US issued a fake threat alert against Trinidad and Tobago and advised its citizens to avoid visiting the country.

It must be noted that the US employed the same strategy against Trinidad and Tobago which it did against Russia i.e. targeting its economy.

However, now that it will be producing gas with the assistance of BP and Shell, two major energy companies in this sector. Trinidad and Tobago has realised that in order to weaken US’ dominance, it is necessary to first break America’s alliance with its key partner ‘European Union’.

Currently, Europe is in a crisis, its people are angry at their governments for siding with Ukraine which led to skyrocketing inflation. France, Germany and many other European regimes have realised that siding with the US would only escalate their problems. Earlier, they made the mistake of financing Ukraine’s atrocities, which destroyed their credibility in addition to causing financial turmoil in their countries. Now, they cannot deliver another such blunder.