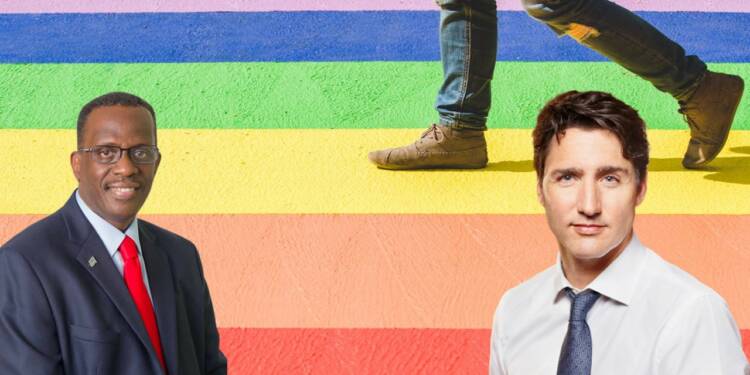 Almost a decade ago, Canada was a great place to live in. People were welcoming and respectful of other communities. In 2022, Canada has become a truly exclusive society, with no place for properly gendered beings. Canadian Prime Minister Justin Trudeau and his Liberal Party have pushed Canadians towards radical wokeism, and the country now claims to be open and diverse. However, today’s Canada has devolved into the world’s most toxic nation.

But destroying Canada isn’t enough for the WEF agenda pusher. Now, Ottawa’s cute faced tyrant is on his way to St. Lucia with his poisonous wokeism. According to a media report by the Caribbean news service, Canada has funded several local Initiatives and also supports programs promoting and protecting human rights in Saint Lucia. Reportedly, the funding is aimed at Saint Lucian youth to have, ‘safe access to a safe space’ support network designed to help rising young with their physical and mental health and wellness as they face a variety of issues.

As part of ongoing collaborative efforts between the Government of Canada, Canada Fund for Local Initiatives (CFLI), and a local non-profit organization has collaborated with the Sacred Sports Foundation to primarily target underserved youth and people in the LGBTQI+ community in Saint Lucia (SSF).

Reportedly, the campaign is called ‘This is ME and YOU’. And this initiative is to create spaces where young people can feel comfortable in their social identities, especially women who feel isolated and struggle with a sense of self. The project will seek to provide a network of safe spaces for those facing social exclusion as a result of identifying as part of the LGBTQI+ community.

The community of love?

Reportedly, Nova Alexander, Executive Director of SSF on this occasion stressed, “It is vital we expand our initial work. These efforts will help create a less vulnerable, safe space environment in which everyone can stay informed, and ideally find opportunities to develop their full potential”.

This is Canada’s second such effort in the last two years to expand the community-based program in St. Lucia. Well, the CFLI program of Canada has occasionally supported a wide range of small-scale, high-impact projects, in developing countries, which align with Canada’s thematic priority areas for engagement. Canada previously supported the Sacred Sports Foundation’s “This is ME” project in 2021 and is excited to continue working with SSF to build a more inclusive global community.

However, the partner that SSF has chosen for this endeavor is pretty bad because Canada, under Justin Trudeau, has a history of sponsoring such heinous crimes, which eventually destabilize civilization and turn kids into dysfunctional adults. Trudeau’s government in Canada has been unintelligible in pushing forward for the rights of these transgenders.  The government is not just talking about the rights of transgender people, in fact, it is pushing minors in Canada to take a decision at a very young age to decide their gender identity.

As a result, minors are reportedly rushing into decisions that can be difficult to reverse as they mature and evolve. There are drag races happening and kids are being shown so much nudity and explicit content that their mind is put on a path of non-sensical thinking. Trudeau government also pitched in a five-year, $100 million initiative to support 2SLGBTQI communities across the nation in furtherance of the issue.

Read More: Trudeau pokes his nose into the Iranian hornet’s nest, this one will sting bad

When minors receive hormonal therapy as part of the gender reassignment operation, they experience a variety of physical and psychological changes. These hormone medications reduce masculine hostility and sexual behavior in male teenagers. As a result, Canada has forgotten its history. What a military and economic powerhouse they were, and what a wonderfully inclusive society they had. Today, it’s basically a fricking civilization where LGBTQ rights are everything.

The same thing could happen in St. Lucia in the near future. Trudeau has already turned Canada into a testing ground for illogical ambitions; Saint Lucia should not fall into the same trap.