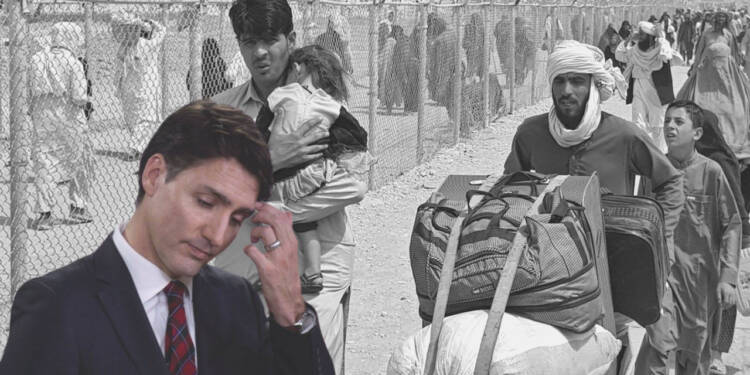 Afghan LGBTQ2: The three things in the world that don’t deserve any mercy are tyranny, fraud, and hypocrisy. Justin Trudeau should receive no clemency in the case of Canada because he is without a doubt the most tyrannical, hypocritical politician to ever ruled Canada.

On one hand, the leader wants to present himself as a supporter of human rights and on the other, the leader’s approach is so selective that he might allow thousands of aid seekers to die out of hunger.

If you’re still not convinced, how about hearing Ottawa’s response to the Afghan crisis: “Aid will be given to only LGBTQ+ community”?

According to a new media report by CBC, the Canadian government has partnered with a refugee group in a bid to aid and bring hundreds of  Afghans LGBTQ2 to Canada. The report is a bit ridiculous, but, yes it’s true.

As per the reports, the federal government and a prominent LGBTQ advocacy group Rainbow Railroad are set to work together to resettle hundreds of Afghan refugees who are fleeing persecution for their sexual orientation or gender identity.

Since the Taliban took over the country in August 2021, Rainbow Railroad stresses that it has received nearly 3,800 requests for aid from LGBTQ and intersex Afghans, but has only been able to facilitate the resettlement of 180 vulnerable individuals in Canada. But now, the group looks to hasten the project with Ottawa’s help as the government will collaborate with Immigration, Refugees and Citizenship Canada (IRCC) to assist another 600 LGBTQ and intersex Afghan refugees in finding safety in this nation.

To be honest, aiding migrants or in this case, hapless Afghans is definitely welcome. Sincerely, there is nothing wrong with helping those who are indeed oppressed by the Taliban government. But why is Trudeau only interested in helping LGBTQ+ immigrants? Simply put, this is a deadly mixture of Wokesim and hypocrisy. Because the same Justin Trudeau is against the Canadians who want to help all Afghan migrants rather than just LGBTQ ones. According to another media report by the Canadian dimension, the Canadian government is still preventing charities from delivering much-needed shipments of food and medical aid to the suffering Afghans.

Read More: Homelessness in Canada is running wild but, Ottawa has definitely turned blind to it

Canada continues to obstruct the export of critically needed supplies of food and medicine to Afghanistan despite tragedies. A federal law prohibiting Canadians from providing aid to “terrorist organizations” (Ottawa recognizes the Taliban as such) is imposed again and again to obstruct supplies of aid.

This same clause was used by the Trudeau administration to force the Canadian charity World Vision to cancel a food shipment in August of this year that would have fed 1,800 children. But the point to be noted here is that the aid assistance for LGBTQ ones never stopped. In June 2022, the Canadian government celebrated Pride Month by helping Afghan LGBTQ2 individuals. Canada also increased its commitment to settle Afghan refugees from 20,000 to 40,000. But, for Trudeau, the greatest need for LGBTQ people in Afghanistan is to get those most at risk out now. And so, they are being settled in Canada. The government contributes start-up costs and three months of income support through the Rainbow Refugee Assistance Partnership, while private sponsors contribute nine months of income support.

Despite lobbying by aid groups, the Trudeau government chose not to act throughout most of 2022, refusing to even offer a timeline for unblocking aid to Afghanistan through this or any other mechanism.

Under the rule of the Islamist group, the fear of abuse, violence, and even death has gotten much worse. However, it is difficult to conceal the Canadian government’s blatant selectivity. Trudeau and his organisation are only interested in assisting the woke Afghans because the other Afghans do not hold Liberal values.

The poor Afgahnas should not expect anything from Canada, not even a penny in the future, because Justin Trudeau is just not ready to help.