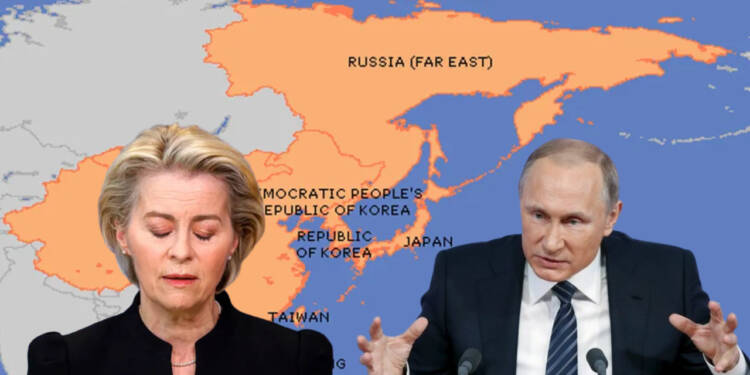 Russia’s far-east has long been unexplored. But not anymore. Russia has fastened its efforts to explore the unexplored. The country’s exploration is largely focused on gas. It is an initiative that’ll end Europe’s only leverage on Russia.

Russia’s far east is a massive area, covering over 6.2 million square kilometres in size, or roughly two-thirds the size of the United States, and makes up 36% of all of Russia. However, it only has around 6 million residents which is roughly 4.4% of Russia’s total population, but its regional GDP only accounts for 5.6% of Russia’s overall GDP.

The area has an enormous amount of natural wealth like oil, natural gas, coal, gold, diamonds, and rare earth metals. So, the Russia’s far-east has been Russia’s Achilles heel, as the vast area has remained undeveloped, secluded, demographically unstable, and open to the interference of other actors.

We say open to interference because Vladivostok is only 830 miles from Beijing and 660 miles from Tokyo, and at the same time, it is roughly 4,000 miles from Moscow.

Now Aleksandr Kozlov, the minister of natural resources and the environment, said on Tuesday that Russia intends to increase its geological search for hydrocarbons, including natural gas in the Russia’s far-east as it strives to redirect its energy exports to Asia in the face of Western sanctions.

Kozlov emphasised in an interview with Rossiya 24 TV channel that expanding energy trade with Asia, and China, in particular, would ensure Russia a consistent market for its oil and gas. He underlined, “We have set a priority for ourselves in geological prospecting and exploration and in aiding the search for mineral resources, particularly hydrocarbons, to be geographically closer to future consumers and transport infrastructure.”

The Power of Siberia pipeline is the only one now used by Russia to transport gas from eastern Siberia to China. However, since 2020, the Power of Siberia 2 pipeline has been in development by Russian energy giant Gazprom. Construction on the conduit, which will begin in 2024, will connect Russian gas reserves with China via Mongolia.

Kozlov continued, “For example, the Power of Siberia pipeline, gas from which goes to China. We have made the decision to carry out geological exploration throughout Yakutia…so that there’s not [just] one, but more pipelines going in the eastern direction. Because this is guaranteed revenue for our country, guaranteed sales to a major partner.”

According to the Ministry of Natural Resources, there will be a spike in investment in the creation of mineral resource hubs adjacent to friendly markets if the domestic oil and gas trade is redirected to nations that have not joined the sanctions against Russia connected to Ukraine.

This will end Russia’s dependence on Europe as a market for its natural gas. To put things in perspective, Europe was the main market of natural gas from Russia, taking nearly 75% of the country’s overall natural gas exports. Most of that natural gas was shipped to France, Germany, Turkey, Italy, Belarus, and Spain.

The dependence of Russia on Europe as a gas market is far more than on oil. Even though the oil exports are 49% to Europe, Russia has managed to find a good market in China and India who have welcomed the dramatic increase in exports from the country. However, the constraint with gas is that most of the Russian exports to Europe is through the pipelines.

So, as Russia looks to explore Russia’s far-east, it’ll be eliminating its Achilles heel. It’ll seek customers in Asia effectively ending its dependence on Europe as its market for gas. Hence we can say that with the move, it’ll be killing two birds with a stone.