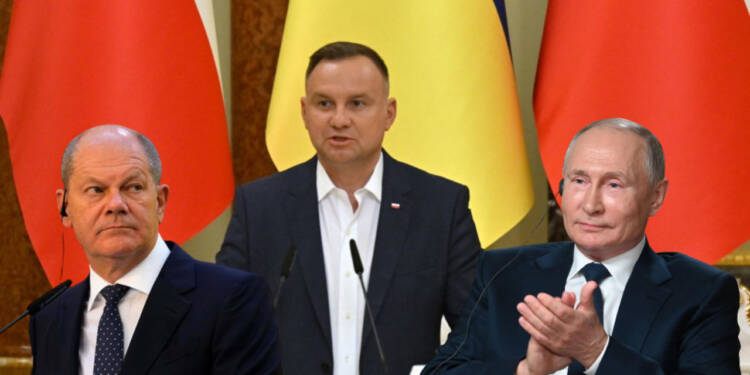 In a bid to retaliate to Russia’s aggression, the West thought of wiping some euros from Moscow’s coffers by imposing a spate of sanctions. But, little did the West know that its move of sanctioning Russia would backfire in such an awful way. Initially, the region was cocksure of finding potential alternatives to Russian oil. It started backing on Northern America, Brazil and Middle-East for the imports but were they actually able to fill the Russian void?

The West’s histrionic outburst at Russia led to its own doom. No country was able to assuage its demands and eventually, the poor West had to turn to its arch-rival.

The war in Ukraine has led to a major oil and gas crisis in the whole of Europe. Most of the European oil and gas needs were met by Russia. But, without considering the underlying repercussions, the EU resorted to detaching all its chords from Russia. This obviously didn’t go well for the European nations so they thought of taking a different path than that of toeing the lines of the West.

First Poland, and now Germany has finally realised the divinity of Russia. Yes, the same Poland and the same Germany which adhered to the most anti-Russian stance in the European Union after the Ukraine war. In the aftermath of the war, Poland and Germany were among the first nations to ask for more sanctions on Russia. But now, they seem to have opted for the easy way out. First Poland and now Germany is all set to leave the European Union in a lurch, as they both are drooling for Russian oil.

According to the president of Russia’s Transneft, the country’s state-owned oil pipeline monopoly, demand for oil in 2023 has come from Poland and Germany. He also stated that supplies through the southern spur of the Druzhba pipeline are anticipated to remain stable next year.

Moreover, despite the EU’s promise to stop purchasing Russian oil through marine lines as of December 5 and Western countries’ price limitations on Russian crude oil, the Druzhba pipeline is still free from sanctions.

The remarks from Transneft contradict reports from last month that Poland intended to back out of an arrangement to purchase Russian crude.

Reuters reports that Polish officials wanted German backing for EU sanctions on the Polish-German part of the Druzhba pipeline, according to sources , so that Warsaw could back out of a contract to purchase Russian oil next year without incurring fines.

“They announced that they would not take oil from Russia from Jan. 1. And now we have received requests from Polish consumers: give us 3 million tonnes next year, and 360,000 tonnes for December, and Germany has already submitted a request for the first quarter,” Transneft head Nikolay Tokarev said on Tuesday.

A German economy ministry spokesperson said reports that Germany had ordered Russian crude oil were false and the mineral oil companies at the eastern German refineries in Leuna and Schwedt are no longer ordering Russian crude for the next year.

But, it’s hard to trust the continent after the recent reports claiming that Europe is sneakily importing Belarusian timber that was sanctioned.

So, long story short is that Poland and Germany were on paper aiming to eliminate Russian oil imports by the end of the year. In actuality, they were prepping up to compel Russia to reinstate its trade setup. Both the countries are now facing hassles and dilemmas after nine packages of sanctions were imposed against Russia. But, now they seem to opt-out of their own bid.

Recently, Polish consumers even demanded for deliveries from Belarus in 2023 and Germany was also expected to secure its stable oil supplies. We at TFI anticipated that Germany would be the next country to violate the sanctions and import oil from Russia, and the exact thing seems to transpire. Poland and Germany are on their path to solving their oil vows with Russia.