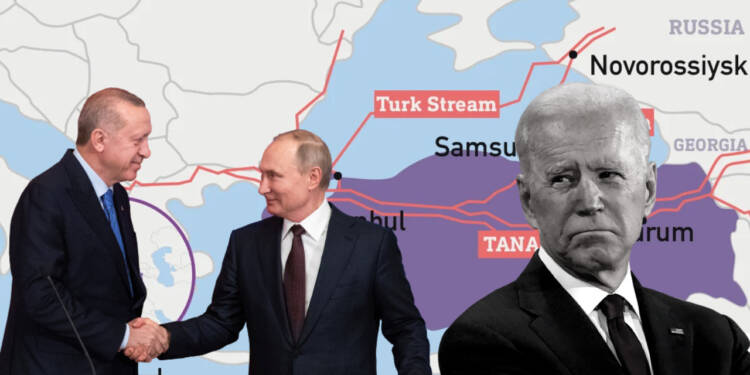 US’ President Joe Biden has become restless after the partnership between Russia and Turkey has been announced. The partnership aims to make Turkey the gas hub of Europe. But, why is Biden rattled? Let’s find out.

Aleksey Miller, the director of Russian energy giant Gazprom, has disclosed that Moscow and Ankara have started to work on establishing a natural gas distribution centre in Turkey. According to Miller, the project aims to promote fair and transparent pricing in the natural gas market.

Russian President Vladimir Putin suggested in October building a hub for gas supplies in Turkey. As a result, the president claimed, Russia would be able to divert transits away from the damaged Nord Stream gas pipelines and toward the Black Sea area. He added that the gas hub could be used to set gas prices and prevent the “politicisation” of energy in addition to acting as a platform for distribution.

The concept has been embraced by the Turkish president, Recep Tayyip Erdogan, who claims that the EU will be able to purchase Russian gas through his nation. Thrace, in Turkey’s European region, is the suggested location and gas pipeline and storage facilities are already in place here. Although the proposal’s price, dates, scope, and conditions have not been made public, the project has already drawn criticism and is widely thought to pose a threat to many nations, especially the United States.

Vedant Patel, the spokesman for the US State Department, said that Washington continues “to urge our allies to take steps to diversify their energy sources, to reduce energy reliance on Russia.”

Energy supply is a crucial and divisive topic in international politics, one that causes issues between exporting and producing nations, as we recently saw in the case of Russian supplies of gas and oil to Europe, a trade that was affected by sanctions because of the conflict in the Ukraine.

Producers are obviously engaged in a vigorous battle for market share and will take advantage of every chance to “gain” ground on their rivals. The US supplied more liquefied natural gas (LNG) to Europe through its pipelines than its biggest rival, Russia, for the first time in its history in June of this year, an achievement that would have been unthinkable just two or three years ago.

However, that supply chain is still very expensive because intermediaries double the cost of gas before it reaches Europe. As a result, European politicians have expressed their displeasure, including French President Emmanuel Macron.

Additionally, Putin stated during the “Russian Energy Week” that Russia may construct additional pipelines to turn Turkey into a centre for supplying gas to nations in Europe. However, the US is not happy with Turkey playing such a role and is even less interested in Russia profiting from triangulated sales of its gas because this would harm its economic interests and the sales of its own gas.

Large-scale investments have recently been made in Louisiana and Texas to build facilities for processing liquid gas for export to gas-hungry markets in Europe and other regions of the world. Washington is concerned about potential development of Turkey as a “gas hub,” as doing so would jeopardise its vested interests in the energy industry.