Biden is left alone in his own backyard as Cuba runs to win over all of America. And it seems like Miguel is making significant progress 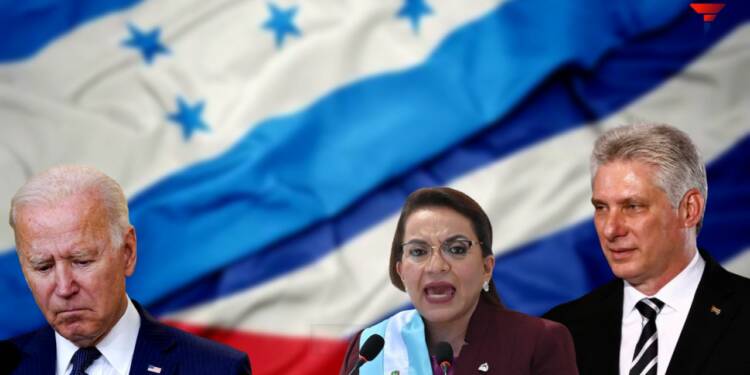 Last year, the United States of America got a breather after Honduras elected Xiomara Castro as its president. During her inauguration, Vice President Kamala Harris visited Honduras to express her support for her.

Clearly, Harris’s attendance wasn’t just a show of solidarity with Castro’s agenda — it was meant to signal a new era of US-Honduras relations. The US believed that, despite its turbulent relation, Honduras may finally maintain its composure toward the US. And eventually, it started to happen. The jovial relations, however, have been overshadowed by Cuba. Let’s see how!

According to a media report by 14ymedio,  giving a major blow to the US, Honduras has hired Cuba’s services to ‘rebuild’ its education system. Reportedly, Honduras is going to receive 10 Cuban “high-level education professionals” to help develop a new academic curriculum design that “will completely change the educational model.”

This agreement will last for three years and aims to “contribute to the design and implementation of the process to transform education from the perspective of curriculum, beginning with the establishment of cooperative relations between the two countries.”

Although the details of the memo never came to light, yet, the Honduran Foreign Secretary, Eduardo Enrique Reina, had given a statement. The statement stressed, “With this memorandum, we open up the possibility of moving through new paths of collaboration in science and technology, literacy programs and the exchange of scholarships, among other things.”

And undoubtedly, this new educational reform is a part of it.  However, this sudden announcement by Honduras has left Biden and his officials in the US baffled.

Consequently, immediately after Honduras’s announcement, Biden decided to send its men to assess the sudden shift in stance.

US Under Secretary of State for Civilian Security, Democracy, and Human Rights Uzra Zeya is going with a high-level interagency delegation to Honduras in January, to take part in the US-Honduras Strategic and Human Rights Dialogues.

The US has recently expressed a desire to advance the bilateral agenda shared by the two nations in order to support a democratic, economic, and safe Honduras.

Biden hasn’t even attempted to arrange a face-to-face meeting with Xiomara in the past year. It is currently sending a group to Honduras to make amends. This progress can only be credited to Cuba.

Anyone with a little sight of geopolitics could easily understand that Cuba is currently on a bigger mission i.e. to become a crucial player in South America.

Just a few weeks ago, Cuba decided to take up the cudgels against the West by getting more engaged with other Caribbean nations. Cuban President Miguel Díaz-Canel had begun his tour of Caribbean nations, which included his participation along with several ministers in the VIII Caricom-Cuba Summit which was held in Barbados.

There, the Cuban President was quite successful in setting the agenda against the West. This was already a major blow for the US, which Washington was not able to digest at all.

Now adding insult to injury, Cuba has started luring the central American region too. Keep in mind this region is already one of the most anti-US regions in the whole of South America.

The traces of this collective anger ranges back to the 1980s when the US deployed CONTRA forces in Nicaragua to stop the development of the Nicaraguan Canal.

At that time, even Hondurans attacked and criticised the US for supporting the insurgents. It was feared that the US would desert the rebels, leaving Honduras to disarm the combatants and provide them with long-term housing alongside the hundreds of thousands of Nicaraguan refugees already present in this nation.

Read More: Clear signs are here that the US is afraid of Cuba- Haiti alliance

The issue is a long gone matter. And Honduras under Xiomara was in no mood to take up the matter again. However, by re-linking ties with Cuba, one can easily conclude that this is Honduras’ way to give an angry glare to the USA.

Biden is left alone in his own backyard as Cuba runs to win over all of America. And it seems like Miguel is making significant progress. Biden is only sending his team to meet with Honduras for this reason. On a global scale, the central American belt may once more react to Biden with anger. Let’s wait and see how this tug-of-war develops.

Canada’s MAID regime has been running amok, it’s time to tame it