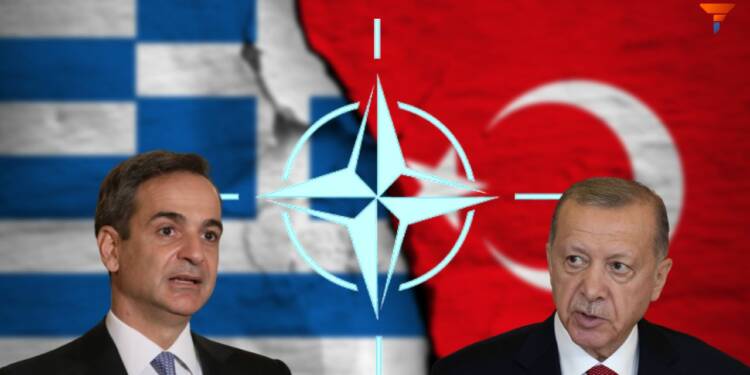 Greco-Turkish rift: On either side of the Aegean, people are peace-loving but there’s a longstanding divide between the two. Turkey and Greece are not only separated by the Aegean sea but also animosity. From either side of the Aegean, only hatred can be heard. Hatred between the Turks and the Greeks. All the involved governments and even the Americans are to be blamed as they keep it going as long as it serves their interests and fattens America’s wallets.

The tussle between the two has seen aid funnelling from around the world especially NATO members which has even created an oblique divide between the bloc. Now, this has led to NATO’s main goal going onto the path of oblivion. NATO’s fundamental goal is to safeguard the allies’ freedom and security by political and military means but it seems that every country is investing their heart and soul to the Greco-Turkish rift.

The conflict between the two member nations stems from the Cyprus issue. The ongoing struggle between Greek Cypriots in the south and Turkish Cypriots in the north is known as the Cyprus problem, sometimes known as the Cyprus dispute. The “Cyprus dispute” was initially a disagreement between the Turkish and Greek inhabitants following the capture of the island by the British Empire from the Ottoman Empire in 1878 and later annexation in 1914.

The dispute has international ramifications that go beyond the confines of the island of Cyprus itself. These ramifications include the involvement of the European Union, the United Nations, the guarantor powers under the Zürich and London Agreement (Greece, Turkey, and the United Kingdom), as well as former meddling by Czechoslovakia and the Eastern Bloc. Owing to this issue, the two nations have been at war since then. From sabre-rattling to perpetuating missile attacks they do every effort in order to terrify their rival. But, what keeps the two nations still related are their NATO roots.

Greece and Turkey were welcomed by NATO as active members in 1952 and were then bound in a security agreement but the tensions over Cyprus had things go helter skelter.

Greece withdrew armed units from NATO forces in the Southern Mediterranean in 1964 as a result of the Cyprus issue and Turkish threats to invade Cyprus. Later in 1974, Greece left NATO’s military command as a result of Turkish soldiers invading Cyprus. Despite this, the nation reduced its participation in the organisation but did not completely leave it.

Greek Foreign Minister Konstantinos Mitsotakis made comments in 1980 on the possibility of Greece completely leaving the organisation. Greece, however, eventually fully reintegrated with the alliance as a result of diplomatic pressure from the United States. A 2022 poll found that 78% of Greeks wanted to stay in NATO and only 18% wanted to leave, indicating that the alliance is still well-liked by the Greek people.

Moreover, this episode also had the bloc getting disintegrated into two- one of those supporting Greece and the other supporting Turkey. Clearly, the member nations are so involved in the Greco-Turkish rift that they have forgotten their main motive as to why it came into existence.

You see, in the years following the Second World War, the North Atlantic Alliance was created. Its goals were to safeguard European peace, foster collaboration among its members, and protect their freedom – all within the framework of fending off the Soviet Union’s danger at the time. Twelve nations from Europe and North America gathered in Washington in 1949 to sign the founding treaty of the Alliance. It binds the Allies to uphold democratic ideals, individual freedom, the rule of law, and peaceful conflict settlement. The treaty, which is significant, establishes the principle of collective defence, which states that an attack against one ally is treated as an attack against all allies.

The North Atlantic Treaty Organization, or NATO, makes sure that the security of its North American and European members is inextricably intertwined. But, it seems that the member nations are now more interested in ensuring the security of just Turkey and Greece who are at a ‘Forever War’.

NATO allies Turkey and Greece have been at odds over territorial and airspace claims in and over the Aegean Sea for many years. Even analysts have cautioned several times about the possibility of the present tension affecting NATO business as the longtime adversaries escalate their verbal combat. Both the countries keep on hurling threats and accusations on each other which are signs of raising tension among the NATO allies.

You see, three times in the previous 50 years, Turkey and Greece have been on the verge of war due to long-standing tension. And, this points to serious concerns at a time when Russia is already at war with Ukraine. The recent spat between Turkey and Greece takes place as NATO is focusing on displaying a united front against Russia in the face of its invasion in Ukraine.

Experts are worried that if the tension escalates to the point of hostilities, Russian President Vladimir Putin can take advantage.

“Whatever little cracks can appear in European unity, Putin can make them even larger and in fact split the rock. So, it not only undercuts European unity but also can spill over into NATO councils if one or the other country uses NATO as a weapon to hurt the other,” said Jim Townsend, former U.S. deputy assistant secretary of defence on European and NATO policy.

He warned that those cracks can be exploited by Moscow as winter approaches; Russia has already cut back on its gas exports to Europe.

Now, reducing tensions between Turkey and Greece has become more important than stopping the Russian scare in the region. As united we stand and divided we fall, if NATO divides owing to the ongoing infighting, its biggest threat will come hounding like a serious nightmare.