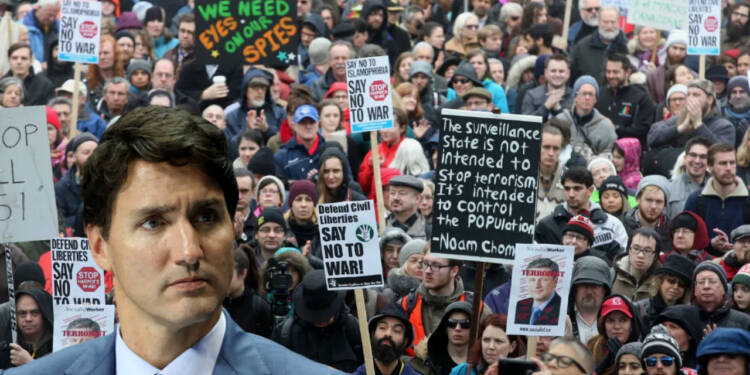 The liberal government in Canada is playing a cruel joke on its people’s privacy. You ask for funds for reviving healthcare, feds won’t shy away to say a big ‘No’, because that is not what the government cares about. What it really cares about is tightening its grip on the reins of power.

The latest addition to the list is the state sanctioned propaganda to alter the behavior of the citizens and collect information from their social media accounts. The country’s National Defense is minting Canadian dollars to spy on Canadians and infringe upon their privacy. One wonders if this is the 1984 that George Orwell predicted for us.

A contentious plan to authorize state surveillance was introduced by the National Defense of Canada. The parent business of Cambridge Analytica, the corporation involved in a 2016 data-mining scandal to aid Donald Trump’s presidential campaign, used behavior modification techniques that were taught to public affairs officers by the Canadian Forces. This training cost more than $1 million. Additionally, nearly $10 million had been allocated to defense contractors and other businesses to create innovative methods of social media analysis and account sifting.

Gen. Jon Vance, who was then the chief of the defense staff, ordered the program’s termination after information about it became public. But did anything of that sort really happen? Absolutely not. In fact, six months after this statement, the military is again back at innovating new technology to accomplish its unfinished goals.

According to records obtained, members of the same public affairs team that was responsible for the earlier propaganda initiative, have once again conducted operations under Gen. Wayne Eyre, who was then serving as acting head of the military staff. National Defense-funded technology demonstrations of fresh methods for keeping tabs on and purging social media accounts took place in May 2021.

One of those strategies was using retired generals and allied defense analysts to promote military PR messages and attack those who questioned military spending and the lack of accountability on social media.

In Ontario, a military squad watched and gathered data from users’ social media accounts on the pretense that it was necessary to assist troops who would be working in long-term care facilities during the COVID-19 epidemic. This campaign entailed gathering complaints made by Ontarians concerning Premier Doug Ford’s administration’s neglect of the elderly to the provincial government of Ontario.

In another instance, military information operations personnel faked a letter from the Nova Scotia government warning of wolves on the loose in a specific area of the province, during an exercise performed in September 2020, when Eyre was the army commander. The idea was to experiment with methods for influencing the local population. However, the letter was unintentionally circulated to locals, which led to frantic calls to Nova Scotia officials, who were unaware that the military was behind the hoax.

Well, all this is just a strategy to shift public opinion. The government is testing techniques on how to influence the local population. In addition to invading the privacy of Canadians, the government is using more aggressive methods of using information warfare and influence tactics on them. Clearly, under a dictatorship, nothing from your organs to your privacy is safe.