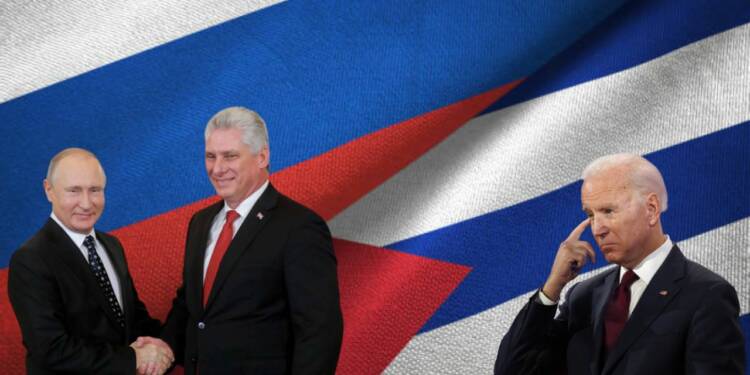 Tensions between Cuba and the United States have been mounting in the past few months. Though, relations between both the countries have always been sour, recent developments have taken somewhat of a comical turn. The Russia-Ukraine War has forced the US to revise its attitude towards smaller nations it has bullied for long. To contain it’s influence across the globe, the giant has now, knocked on the doors of its old enemy- CUBA. It has offered it incentives, in exchange of it abandoning its close ally, Russia.

Cuba, however, is simply not prepared to fall for such sinister attempts because Russia has been a reliable ally.

According to media reports, US Army General Laura Richardson, in a virtual conference has stressed that the United States wants nine countries in Central America, South America, and the Caribbean to “donate” their Russian military equipment to Ukraine. In exchange, the US would provide them with new US-made military equipment. These countries include Cuba, Venezuela, and Nicaragua.

The Army General has reportedly stressed, that the United States will offer the correct incentives for these countries to transfer their weapons, be it cash, some sort of security arrangements, or promises to backfill with weapons.

For the US, this is a godsend opportunity to peel these countries away from Russia weapon systems and influence. But, the it is definitely naive if it believes that it would be easy to convince them to curb Russian influence, especially Cuba.

For the last few months, the US has suddenly become quite favorable to Cuba. Just a few days ago, US officials arrived in Cuba for talks with law enforcement. Prior to that, the US also decided to re-open its visa and consular services in Cuba.

For the first time in 54 years, the American flag flies above @USEmbCuba. #Cuba 🇺🇸 http://t.co/0O4X1m5bb8

Now, US General has finally revealed Biden’s true intentions. US actually wants Cuba to give Soviet Era tanks to Ukraine because that technology is easily manageable for the Ukrainian military.

But, Cuba will not give into the demands so easily because, without any shadow of a doubt, Cuba is a Russian ally. Plus, given the bitter history between the two nations, it is no surprise why it would be wary of allying on it.

While the US continues to dream that Cuba might sway, Russia has made a significant announcement. With the help of the Cuban state corporation CIMEX, Moscow has proposed setting up a Russian trading house in Havana and is awaiting an answer from the Cuban government in the coming days.

For the unaware, CIMEX was founded by the Cuban Ministry of the Interior in 1978 in Panama in order to circumvent United States sanctions. It is one of the mechanisms through which the Cuban economy is still thriving despite severe sanctions.

Now, the Russian side is now working very hard to take our economic relations with Cuba to a new level and make deep inroads into the Cuban economy.

Cuba was also among the first nations that refrained from criticizing Russia for its attack on Ukraine. Russia also gave two massive wheat consignments to Cuba as they suffered from acute food shortages in April and December 2022.

The US is well aware that, if Cuba stays in the Russian camp, Russian influence in the Caribbean and the Americas will increase. The US greatly fears a strong Russian presence in its neighborhood. Although it is understandable that the US is desperate, it is completely illogical to think that Cuba will submit to such outrageous demands. But then again, what else can you even expect from Sleepy Joe?  ,,,