Trinidad and Tobago proposed an energy alliance between itself and its allies on the island chain. However, another significant announcement has made it nearly impossible for the US to participate in TT's energy pool 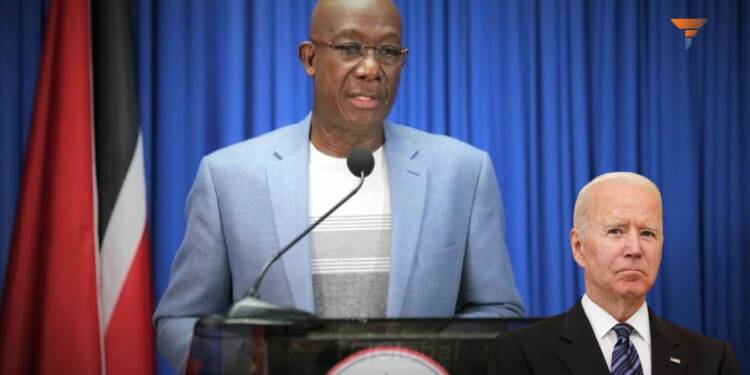 Trinidad and Tobago once again showed Biden run USA that the nation be dictated by it. How? Let’s explore!

Port of Spain is serious when it stresses that it wants to be a major player in the energy sector. Recently, a three-day conference is being carried out in the TT over energy, organized by the Energy Chamber of Trinidad and Tobago.

In this, Trinidad and Tobago proposed an energy alliance between itself and its allies on the island chain. However, another significant announcement has been made. That announcement has made it nearly impossible for the US to participate in TT’s energy pool without government approval.

What a rebellious, bold and veracious move!

According to media reports, Prime Minister Keith Rowley has announced that Trinidad and Tobago will consider holding direct talks with energy companies for the purpose of conducting oil and gas exploration, potentially abandoning its current system of competitive bidding rounds.

The discussions come after the government had to renegotiate terms with interested companies as a result of its faced difficulties in luring new companies in the recent shallow and deep-water bidding. As per PM Rowley, a change in the allocation process might help the government to allocate more areas and ramp up production.

For the unaware, Energy is one of the main sources of revenue for Trinidad. It is also Latin America’s largest exporter of liquefied natural gas (LNG).  To diversify its sources, Trinidad and Tobago has recently increased efforts to attract foreign investors to its energy sector, particularly to increase exports of petrochemical products and liquefied natural gas.

Now, one must note that this announcement has come at a time when the US and TT are at loggerheads over the energy sector.

Trinidad and Tobago is subjected to US sanctions. This is due to a contentious fuel shipment from Trinidad’s Paria fuel trading company to Aruba, which was then sent to Venezuela. After Venezuela’s Vice President Delcy Rodriguez visited Trinidad and Tobago on March 27, 2020, tensions between the two nations grew . There is animosity toward each other and so, this action is just another page in the same book.

The Extended Rivalry and USA’ Humiliation

Now, coming to the recent turn of events. The majority of the bids in the most recent offshore bidding rounds came from the USA. Consequently, the results fell short of expectations. Later, rumors broke that TT had rejected Shell and BP’s bids for a contract. A few days later, it was made public that 16 small American companies, rather than Shell and BP, had submitted applications for offshore exploration.

It must be noted here that oil and natural gas contribute substantially to the country’s economy. Oil production, refining, and the production of LNG are the major industries in Trinidad and Tobago. And clearly, Biden doesn’t like that a small nation is minting money from energy all by themselves.

Read More: Troubled by Biden, Trinidad and Tobago has decided to explore other options

TT, on the other hand, does not want American businesses to enter its territory undercover. They do not want the US to take their resources without their permission. Now that Rowley has to approve it, they are unable to proceed. This in itself is a really wise decision.

Let’s wait to see how the US reverts back to TT. For now, TT has played really well.