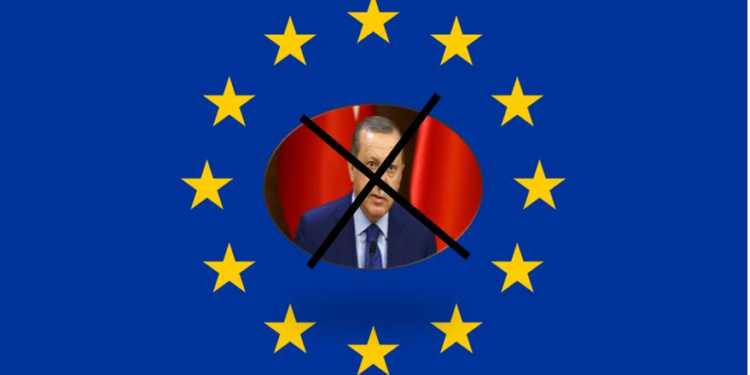 The chances of Turkey gaining the much-coveted membership of EU seems to be fading away as politicians on both sides enter into a war of words.

Turkish President Recep Tayyip Erdoğan has warned that Turkey will review its relationship with “fascist and cruel” European Union. He accused Germany and The Netherlands of behaving like “Nazis” when they refused to allow him to hold rallies in their countries citing security or technical reasons for the impending referendum next month. He had sent some of the cabinet ministers to Germany, Austria and The Netherlands for holding these rallies.

The remarks met with a rather meek response from German Chancellor Angela Merkel who told the Parliament that comparison with Nazi Germany will lead to trivializing crimes against humanity and the present day Germany would not tolerate such juxtaposition. French President Francois Hollande rejected the “Nazi” comments as “unacceptable”.

In a stern warning, Turkey’s interior minister warned that the March 2016 refugee deal might be trashed and some 15,000 refugees will be passed on to Europe every month if European countries won’t allow the rallies.

Countries who wish to join EU are required to adhere to certain standards of democracy and human rights. Turkey’s desire to become part of the EU, known as European Economic Community at that time, goes back to 1987 but nothing concrete happened until 2005 when it formally applied for the accession. Since its application for the membership, Turkey has made little progress towards fulfilling the conditions including abolition of death penalty in 2004 as well as reforms for women’s rights. But now the country wants to reinstate capital punishment in the light of coup attempt in July 2016. The negotiation talks for the membership have gone at such a slow pace that a few people now believe that Turkey will eventually join the bloc.

In November 2016, the European Parliament had voted to stall EU Membership talks with Ankara after the crackdown on military, press and free speech after the failed coup in July last year. Nearly 120,000 people were dismissed from their public-sector jobs and many journalists were rounded up. The resolution was non-binding and only advisory in nature.

Turkish quarrel with EU turned ugly when the Turkish President Recep Tayyip Erdoğan at a rally in Ankara accused Europe of being racist, fascist, cruel, anti-Islam and anti-Turkish “like before World War Two”. He also said that he would not allow EU to dictate terms to him by threatening to cancel the Turkey’s candidature for EU membership or withholding of funds under the migrant deal. Mr Erdoğan said that he will review Turkey’s relation with EU and promised that post-referendum the world will see a “very different Turkey”.

Responses have emerged from German leadership who say that Mr Erdoğan was no longer welcome to their country and that those who compare the German polity with Nazis are not allowed inside German borders.

Actually, the Turkish President wants to earn the votes of the far right by initially attacking the leaders of some countries and then going after the entire EU he wants to win over the votes of the people who feel that EU doesn’t give Turkey its due. To catch their attention, he is increasingly going anti-west. Moreover, Mr Erdoğan feels that EU needs Turkey more than the other way round. This may turn into a costly assumption. The relationship with EU is very important for Turkey’s economy and Mr Erdoğan better not stretch the rhetoric too far. However, irrespective of the result of the referendum the relation with EU is not going to normalize even after the referendum considering the choice of words is somewhat denigrating. The supposedly civil war in Syria that has caused the world’s largest migrant crisis since the World War II with the Syrian people rushing to safer haven particularly the European countries. The huge and unregulated influx of migrants weighed in on the economy of the European countries especially when they are going through an economic slowdown.

More than a million refugees move to Europe every year illegally. Most of them reach Greece by crossing the Aegean Sea from Turkey. It hosts nearly 3 million refugees which is the highest by any nation. So, Turkey can act as a buffer to control of outflow of refugees into Europe but it needs funds to manage them. To manage this refugee problem, Turkey made an agreement with EU. The deal was struck in March 2016 to stem the flow of refugees from Syria in lieu of $3 billion, a commitment to restart Ankara’s decades old EU membership and visa-free travel to Turks in EU’s 26 nation Schengen Area. Now Turkey is of the opinion that the deal was actually one-sided and it is under no obligation to honour it and that the commitment for EU membership had certain riders. They say both parties need to honour the conditions.

Referendum – the root cause of the ‘word’ wars

Turkey has come up with a new draft constitution that would increase the powers of the President considerably. That would be put to referendum on 16th April next month under a state of emergency that was imposed after the attempted coup in July last year. Mr. Erdoğan has urged his supporters to vote in its favour and it is this support which he sought by holding rallies in Germany. There are as many as 3 million people of Turkish origin who live in Germany and nearly 1.4 million of them are eligible to vote for the Turkish referendum. Between 50-60 percent of the Turkish people in Germany supported their President and his party in the elections over the last couple of years. The polls show that there is a close contest between the “Yes” and the “No” groups for the referendum.

The new draft constitution is stated to increase the powers of the Turkish President significantly. The present constitution was drawn under the auspices of the military after the 1980 coup d’etat. The new provisions are controversial and don’t gather much consensus within the Turkish polity so much so that it has actually become a referendum on the President himself.

The new constitution would convert Turkey to a presidential republic from a parliamentary form of government. It would do away with the prime minister’s office and create new posts of vice president(s). The president would become the head of the executive as well as the head of the state. He would get sweeping powers to appoint ministers and senior judges, budget allocations and law enactment by means of a decree. He would be able to declare a state of emergency and dissolve the parliament which would lose the right to initiate an enquiry on the ministers. However, the parliament would be able to start impeachment or investigation against the president

It is these authoritarian powers that Mr. Erdoğan wants to achieve and that is why he is going after the votes of the 1.4 million Turkish people in Europe. It would make him all powerful and turn Turkey into a ‘Presidential dictatorship’. On the other hand, the EU had opined that the referendum would rest too much power in the hands of the President.

The deceitful world of “free” and “equal” Cuban Healthcare system