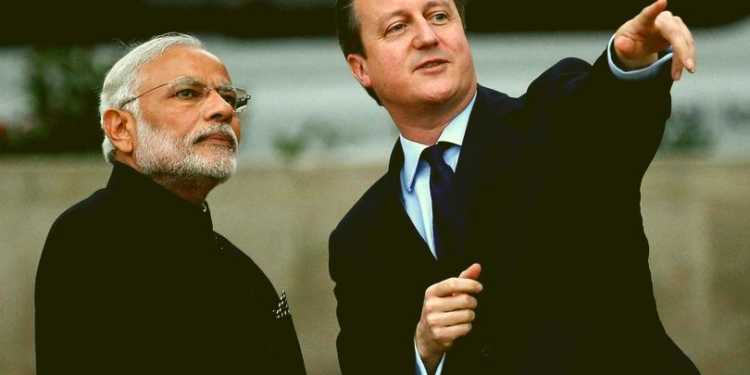 David Cameron, former Prime Minister of United Kingdom said that India is fortunate to have a leader like Narendra Modi who has a clear vision. He was invited at the Annual General Meeting (AGM) of Indian Chamber of Commerce (ICC) in Kolkata. He recalled that India-Britain relationship was one of the priorities during his premiership from 2010 to 2016. “No one in the G20 invests more in India than the UK and there is no bigger foreign investor in the UK than India. We are proud of that because we benefit from each other’s success”, said Cameron. He further said, “India is one of the largest economy and is said to be one of the fastest growing economy of its size… for its further development the country should focus more on development of infrastructure and skill development”.

Cameron, an ardent supporter of globalization and free trade told the public that if India wants economic growth it needs to open up to the world. He gave the example of how Britain became a successful economy through trade and India lifted millions of people out of poverty through economic reforms. “Britain became a successful economy through its desire to trade, invest, sell and innovate, while India, by setting it’s enterprise free, was able to lift 150 million people out of poverty in just two decades,” said Cameron.

He said that ‘Skill India’ program of Modi government needs to embrace the private sector as well for its success because the government initiatives alone could not bring substantial changes. Citing the example of South Korea that imparts skill training to 98 percent of its students compared with 68 percent in the UK and just two percent in India, Cameron said countries like India and the UK need to invest more in skills development. In his speech Mr. Cameron mentioned that he hopes India soon becomes a member of the United Nations Security Council.

The economic reforms of Modi government are winning appraisal from leaders across the world. Global institutions like the International Monetary Fund (IMF) and the World Bank have expressed faith in the Indian economy and hailed it as the fastest growing major economy in the world. Many small countries in our neighborhood see Narendra Modi as a role model. PM single-handedly made a turnaround in the foreign policy of the country through clever diplomatic moves and good relations with the global leaders. After winning the election he invited SAARC leaders for a oath taking ceremony which indicates that he is a master strategist of diplomatic moves.

Under his leadership, many social and economic reforms were brought. The initiatives like Swachh Bharat Mission brought a revolutionary change in public mindset towards cleanliness and hygiene. The National Health Protection Scheme (NHPS) is the first attempt in the country to move towards a universal healthcare system. The scheme, popularly known as Modicare is expected to give healthcare benefits to 50 crore people in the country. The economic reforms like GST and Insolvency and Bankruptcy Code are monumental steps to formalize Indian economy, improve the tax base and move the country towards a capitalist economy. The steps of demonetization and crackdown on shell companies had proved a major blow to black money. These bold moves are the reason PM Modi is being praised at the global level.