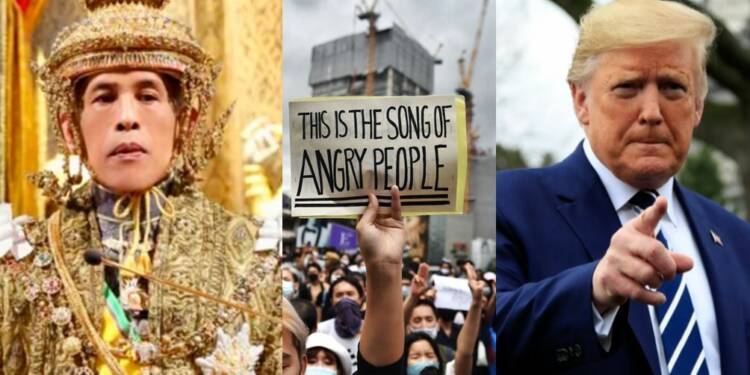 Thailand and the word “Democracy” are sorts of synonyms. Both words are references to the freedom of the people. Thailand used to be a democracy but after a military coup in 2014, Thailand began to turn into an authoritative regime with its royal family hungry for more power. Since then there have been increasing military ties between the Thai Army, its monarchy and Communist China.

Since the Wuhan virus pandemic unfolded early this year, it showed the incompetence of authoritarian regimes around the world. Whether it’s Communist China or Thailand itself. On the other hand, it shows how a democracy is superior to an authoritarian regime. Taiwan, New Zealand, and India so far doing better at handling the pandemic and death rates. This, topped with the rich King’s luxury German getaway, has sparked pro-democracy protests in Thailand.

Read More: In Thailand, the youth are pushing against a pro-China government with all their might to preserve democracy

Thailand’s GDP is heavily dependent upon the tourism industry which nearly 10% of its total GDP. Due to the pandemic, Thailand’s economy is crumbling. This is turning into growing resentment among the people against the royal family. In the fear of losing power, Thailand’s Royalty is deepening ties with the CCP and following the path of the CCP, consolidating more power and control over the lives of the Thai people. The Thai people have been protesting since the beginning of this year, but the protests picked up pace only in June and became the biggest pro-democracy and anti-monarchy movement in the country’s history.

China is supporting the Thai royal family to curb the protest just like China is doing in Hong Kong. Thailand is an important asset for China’s dream in the region as Thailand’s Kra canal could be the key that China is looking for the lock of the “Malacca dilemma”. However, Thailand scrapped this canal project amid international pressure.

Despite this, China is still supporting the Thai royal family because the CCP knows if Thailand again becomes a democracy, the so-called “China’s dream” will be impacted adversely. Just like the unprecedented support was given to Hong Kong protestors by every major democracy around the world, Thai protestors are receiving the same.

Read More: Kra Canal: China is creating another naval route to escape a blockade by India and only Thailand can stop it

The USA signaled its support for the Thai pro-democracy protest. Thailand has been enjoying special trade benefits from the USA. Billions of US dollars’ worth of Thai imports had duty-free access to the US market. The military coup in 2014 and its growing military with China has sent the alarm ringing at the White House. The USA recently suspended duty-free access for 817 million USD valued Thai imports.

The list of imports consists of auto parts of the pork products. This is a major blow to the Thai economy as well as for the Thai royal. This comes as a major stroke from the US, signaling its intentions to the Thai Royals that the US is always standing with Democracy and will not tolerate any authoritarian regimes.

Thailand’s royals are going to take a huge hit, and this comes right after Germany’s blow to the Thai King when in no uncertain terms Germany said, that the King, who had been staying in the Bavarian Alps for much of the pandemic, cannot continue to dictate Thailand’s political matters from German soil.

Massive protests in Germany and Thailand are now coupled with the USA’s decision against the Thai regime. This is a sign that the days of a China-backed military coup in Thailand are hanging on to their last thread. The people have spoken and have explicitly stated that they do not want to advocate further a regime that is corrupt and has failed to contain the pandemic. They want democracy and they want it now.